A Letter from Choon and Yen Hee Lim, serving in Korea

A happy and blessed Lunar New Year to all! In my region, China, Hong Kong, Taiwan, South Korea, and North Korea, all celebrate the Lunar New Year. South Korea, where we are based, has a two-day national holiday. Since Choon’s whole family lives in the U.S. and we are here, we have been spending our free time catching up on things we neglected during the holidays — like writing our first Mission Connections letter of 2018 to you.

There have been two big events here, one good and one bad. The good event is the PyeongChang Winter Olympics in South Korea. We have prayed for peace on the Korean Peninsula and are delighted that North Korean athletes are competing in the Winter Olympics. We were also glad that the opening ceremony featured a musical-cultural group from North Korea and official state representatives from North Korea were present. During the opening ceremony, 195 athletes from the South and 22 from the North marched in together holding unification flags while a Korean folk song played in the background. South Korean bobsledder Won Yun-jong and North Korean ice hockey player Hyong Chung-gum were the joint flag bearers. This reminded us that we were one. It was a true moment of “Peace in Motion,” a moment remembered by all Koreans — both in the South and the North — that was witnessed by 35,000 people in the stadium and people all over the world.

Finally, having completed its 101-day relay around 2,018 kilometers in South Korea, the Olympic Torch arrived at the Olympic Plaza in PyeongChang. South and North Korean ice hockey players Park Jong-ah and Jong Su-hyon passed the torch to the nation’s legendary figure skating queen and former Olympic champion, Kim Yuna, who lit the Olympic cauldron to signify the official start of the Games. It has been 30 years since the Olympic cauldron blazed in South Korea in 1988, and this time the PyeongChang Winter Olympics displayed to the world the unique culture and beauty of Korea.

I couldn’t help but cry when I watched this on TV. As I was born in North Korea, it was particularly moving. What I was watching was historic and incredible: in 2017 nuclear and missile tests were going on in North Korea, and it faced sanctions and pressure from the United Nations and the United States. All of us feared war might break out on the Korean peninsula. But recently, we have witnessed how the Moon Jae-In (South Korean) government is shifting its political stance on North Korea to a more diplomatic and conciliatory approach. Please pray for peace on the Korean peninsula.

In front of the Marshal Hotel (we see only 6 floors of the 10-floor building). 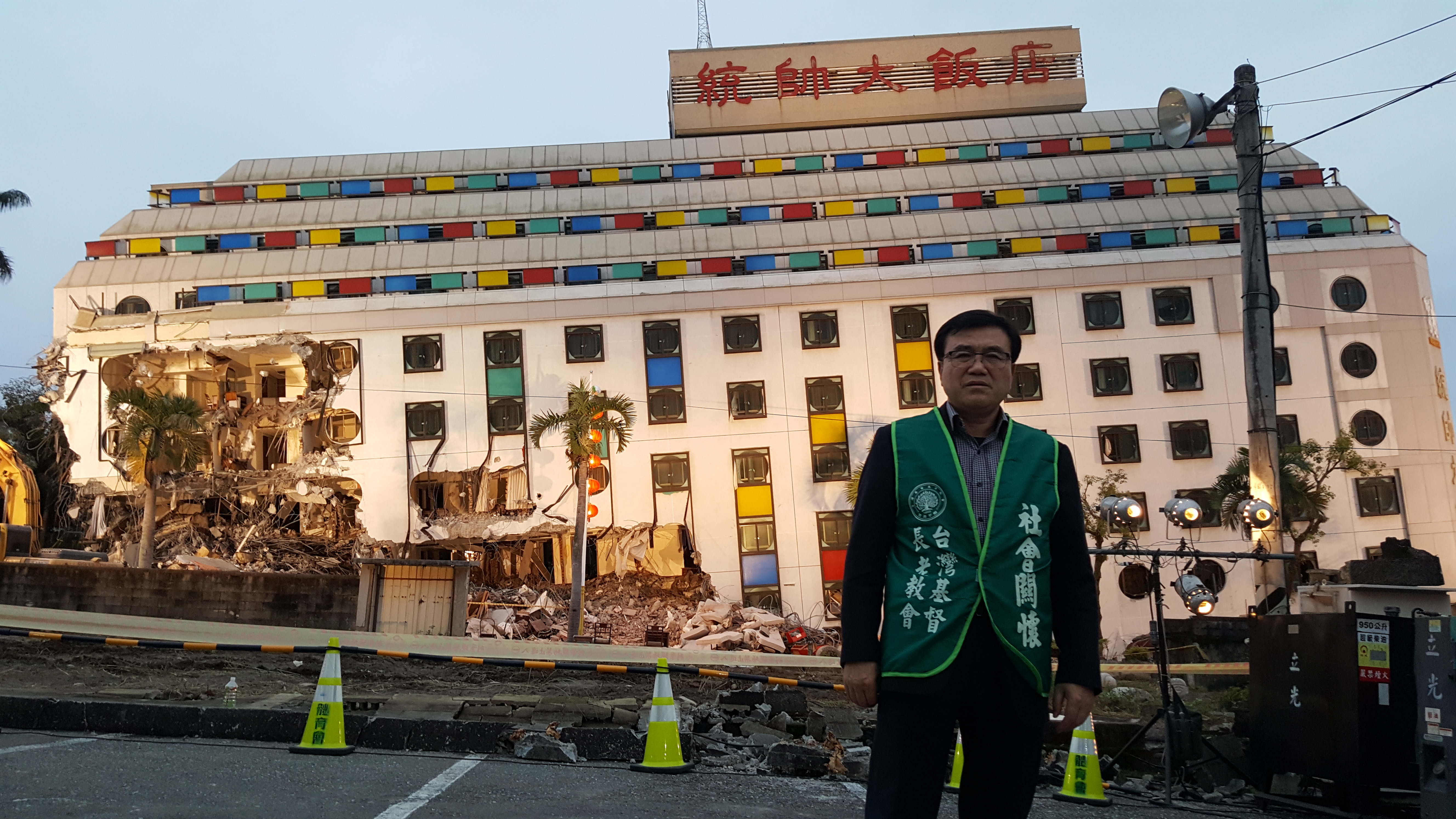 While increasing gestures of reconciliation between North and South Korea have given us great joy, we have been saddened by the recent earthquake that took place in Hualien, Taiwan. On February 6, 2018, a 6.0-magnitude earthquake struck, its epicenter just off the east coast of Hualien City. The earthquake brought partial collapse to the Yun Men Tsui Ti Building, the Marshal Hotel, and two apartment buildings. There were 17 killed and 279 injured, and some people are still missing.

The head of the PCT Relief Center, Rev. Ching-sung Lim, is the general secretary of the Indigenous Amis Presbytery. (When we planted the Hualien Aboriginal Campus Ministry of PCT, he was one of our colleges’ counselors.) Ching-sung took me around all the earthquake sites and to two shelters, Hualien Sports Center and Hualien Middle School (fortunately their students are out on winter vacation). Currently, the two shelters house more than 700 people. Ching-sung also shared with Choon how they are managing the effects of the earthquakes.

Seeking to give assistance, Choon met the Program Secretary for Church and Society in the Presbyterian Church in Taiwan (PCT), Rev. Lim Ui-lien. Ui-lien explained to me that the earthquake disaster response fund has received a lot of support from the government and domestic NGOs like Tzu Chi Buddhist and Christian organizations. They have also received some funds from international partners. The government will build temporary housing and shelters for the survivors, though this will take time. The PCT addresses immediate needs, such as fixing water pipes and other necessities. For example, Hualien Kang Presbyterian Church in Hualien City is without water due to pipe damage. While they try to locate the leaks in the pipe, there is no water for cooking in the community, and no one can use the toilets. Meals are being brought in from other locations. On the morning of February 8, I saw about 30 volunteers gathering in the center to bring food to the affected homes. The PCT advertised on social media that they could help get people’s pipes fixed, and many families phoned the center. I saw more than 150 families on this list.

The PCT relief center sends two pastor groups from the Amis, Truku, Bunun and East Presbytery to the two shelters to counsel the survivors and victims’ families. Choon saw firsthand that trauma counseling is desperately needed. I had dinner with a local pastor who shared that his wife can no longer sleep in their 13th-floor apartment. They moved to one of the church member’s motels outside of Hualien City. On my first day in Hualien City, I couldn’t understand this kind of fear, but experiencing the minor earthquakes (4.0 magnitude) personally while I stayed in a hotel in Hualien City brought the terror home.

As the Lunar New Year celebrations approached (Feb. 15-20 in Taiwan), the victims’ families were downhearted and depressed. We are sad for them. We pray every day for the survivors, the victims, and their families, and for all the volunteers and the PCT workers. Please keep them in your prayers. We also ask you to continue to support us financially as you are able. Your generous gifts make it possible for us to make promote peace among people in the Korean Peninsula as well as East Asia.