Share God’s love with our neighbors-in-need around the world through One Great Hour of Sharing.
Make A Donation Click Here >
Home › What We Do › Where We Work › Co-workers › Using Our Voices

A letter from Tracey King-Ortega serving in Nicaragua

My one-and-a-half-year old twins still don’t talk.  There are a few words that only a mom can decipher, but those are pretty much limited to “agua,” “ball,” and “nana” (the latter meaning a variety of things depending on context such as banana, Grandma, and time to nurse.  I’m not too worried—they’ve got a lot stacked against them in becoming verbal; being raised in a bilingual house, twins, and younger siblings.  Surprisingly, though, they are incredibly good communicators.  I’ve taught them some sign language, which they love to use.  But it’s more their sheer determination that pushes them to be understood. It has to be hard not being able to articulate exactly what you want, always having to play a guessing game to eventually get a particular book or snack.  The voice is a powerful tool, something we often take for granted, yet a gift with which we can do so much. 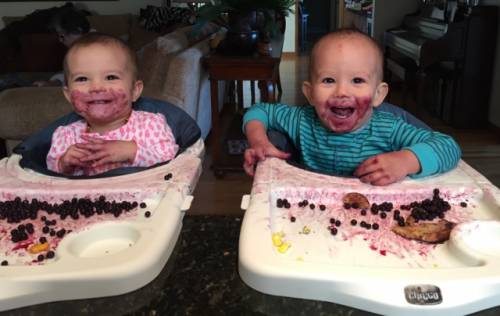 My non-verbal, but very communicative twins

Recently I helped organize and host a multi-country study seminar called “Voices from the Border and Beyond.”  In response to the major influx of unaccompanied minors from Central America to the U.S., we wanted to understand what was happening. We heard the voices of those who have crossed, those who didn’t make it, those who were considering migrating, and others who had decided to stay home and work for a better life there. The complexity of immigration issues is overwhelming.  Weaving all those voices together was powerful. One goal was to lift up the voices of the voiceless, and then to go further.  We hoped that these voices could empower us, informing our voices to take on this difficult issue.

Stories of migration are everywhere. Legal. Illegal. With or without papers, searching for a better life for themselves or their children.  Fleeing violence, fleeing poverty. Dreaming of something more. Whether pushed or pulled, we are all migrants. As we listened to the stories and unpacked the layers of the issue, we knew there was still much to learn and understand and also many ways that we can employ our voices to make it better.  Now that I know the horrors from the border and beyond, what do I do?  Am I called to advocate against the growing privately owned, for-profit family detention centers holding women and children in the U.S. awaiting their court hearings as they seek asylum? What about working toward more coherent and understandable immigration laws that humanize migrants? Or maybe caring for those who are brutally victimized and taken advantage of, physically, emotionally and economically, along the migration trail? What about changing the factors that are pushing people to leave their homes?  Can we address the gang violence and prevalent extortion practices that are terrorizing families throughout Guatemala, Honduras and El Salvador?  Or support community development initiatives that are making a real difference? 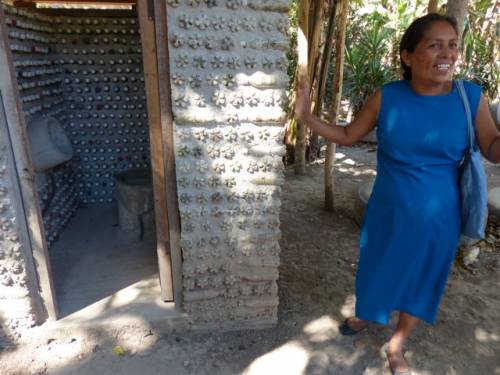 Gloria, in front of a latrine made of recycled materials, sharing with us the success of her family garden

Along the journey we heard from faithful Christians who found a way to contribute.  Not surprisingly, their voices were essential to their call.  We heard Pastor Santos in El Salvador talk about his dreams for his community and his struggle with how to achieve them.  Deathly ill, he dedicated himself in prayer to God and promised, if he lived, to make those dreams a reality.  As he recovered, he worried, “What can I do without resources?” God responded, “You have a voice.”  And that is how he began, by proposing ideas and initiatives for the community.  Today 35 families are living better because of family gardens, chicken coops and fishponds.  One beneficiary, Gloria, shared with us that she believes in solidarity.  If God provided for her, she then must share with others.  From the abundance of her production, she is committed to selling locally at fair prices for her neighbors’ consumption rather than to middlemen whose only concern is maximizing profits.

In that same community where Pastor Santos has voiced his dream—dare I say God’s dream for God’s people—we visited a women’s wine-making cooperative.  Now a successful small business that has created stability and purpose for its members, the women of the “Hidden Flame” shared that as they began to achieve their dreams they began to find their voices.

In my years here in Central America I’ve become aware of the complexity of the problems and often feel like a deer caught in headlights, paralyzed by all the information, not wanting to do anything for fear of the potential unintended consequences of whatever action I may decide to take.  But I am realizing that we need not be afraid to enter into the difficult conversations in hopes that we can discern where it is we are called to contribute.  We may feel small and impotent, but when our dreams are aligned with God’s dreams our voice can be a powerful tool.  And how much more powerful are our voices and our passion when they are used on behalf of “the least of these,” our brothers and sisters in Christ who are suffering injustice? 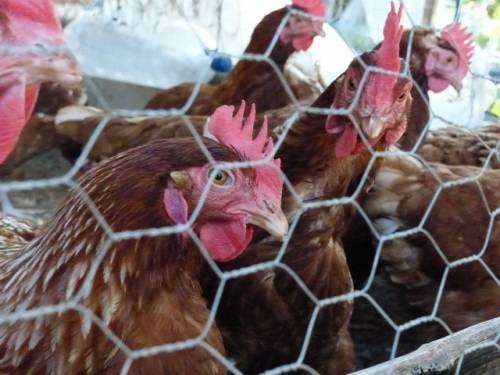 Gloria’s chickens: in all they produce about three dozen eggs a day, which she uses to feed her family and sell to her neighbors

In Scripture we see Jesus using his voice to perform miracles and drive out demons.  Jesus’ essential tool was his voice.  The demons of today are injustices, such as ones we learned about on this trip.  I hear God calling us to use our voices to drive them out.  And for each of us that is going to look different. I challenge you to figure that out.

By supporting both Presbyterian World Mission and PC(USA) special offerings like One Great Hour of Sharing (OGHS), you are directly helping partners here in Central America address root causes of the poverty that drives much of today’s immigration.  This year three sizable grants were given by the Presbyterian Hunger Program to help local groups implement hands-on projects with women, youth and indigenous farmers in agroecology, food sovereignty and leadership skills. This important work means families have greater food security and autonomy. I am grateful for your support of my work and your congregation’s OGHS offering, which provides funding for work in hunger, disaster and development.

Connecting with and supporting these ministries can be a powerful way to participate in God’s mission.  My hope is that however we engage, whether through financial contributions, participating in mission trips, studying issues like immigration, working in advocacy or welcoming and accompanying immigrants in your community, each of us finds a way to lift our voices and be moved into action.

It will be a while yet, but I pray that my children, when they do find their voice, will be blessed with experiences that shape them and compel them to use it to fight injustices and build up God’s Kingdom.