A letter from Kate Taber serving in Israel-Palestine

Individuals:  Give online to E200516 for Kate Taber’s sending and support

Congregations: Give to D507580 for Kate Taber’s sending and support

It is unspeakably special to remember and celebrate the events of Holy Week in the land where they occurred. What pastor gets to walk from the Mount of Olives down into the Old City of Jerusalem as inspiration for their Palm Sunday sermon? Or sing “Were you there?” as they process with a congregation to the Garden of Gethsemane on Maundy Thursday? Or walk the Via Dolorosa itself, marking each station of the cross, on Good Friday? I am humbled by these profound experiences while also feeling somewhat disconnected from the culminating celebration: Easter, the resurrection of Christ. 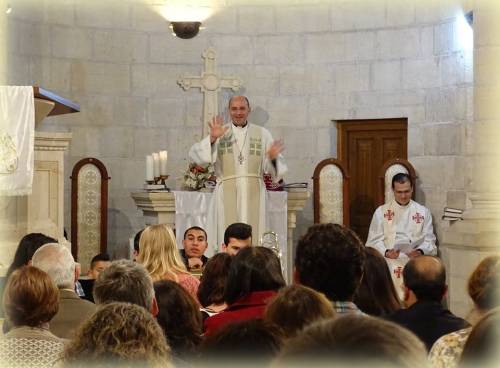 It seems people here often resonate more with the events of Palm Sunday and Good Friday than they do Easter. Palm Sunday illustrates Jesus’ extreme vulnerability as he headed into the city that would betray and crucify him, and Good Friday describes Jesus as one who was unjustly accused, made a scapegoat, perceived as a threat, and ultimately killed by the State.  As tensions and so-called security measures have increased in this modern occupied land, every one of our ecumenical mission partners is afraid of being mistaken as a threat—at a checkpoint, at a bus stop, or even walking down the street—and killed by Israeli security forces. Fewer people walk the streets, more armed police and dogs wait on every corner, and parents drive their teenagers to school and back to protect them.

Yet on Sunday morning the church altar had flowers, the musicians played with brass, we sang “Alleluia!” and the pastor declared, “Maseeh Qam!”  We obediently responded, “Haqqan Qam!” In spite of all the evidence to the contrary, we continue to announce Christ’s resurrection. This is the gift of the church—that the liturgy, the tradition, the community can remember the good news on behalf of and for all even when some struggle. The celebration of Easter reminded me that despite the circumstances of life in the midst of conflict, we are not a Good Friday people. Christ has indeed conquered death, and we can see signs of this victory even now.

For me, one sign of life this spring has been my friendship with a woman named Suhair Ramadan who works as the women’s advocacy officer for the YWCA-Palestine for both domestic and international initiatives.  The YWCA is a historic mission partner of the PC(USA) in this region, with programs ranging from vocational training to civic rights education to international advocacy. I was first drawn to Suhair by her authenticity, humor, and intelligence. I was also intrigued to know her personal story. She is Palestinian and American. She is a Muslim working for a Christian organization. And she has an accent straight from the mid-Atlantic of the United States. I asked her if I could interview her for my monthly newsletter, and she was gracious enough to give me several hours of her time, although some of those hours consisted simply of the commute required to meet me six miles away from her house. 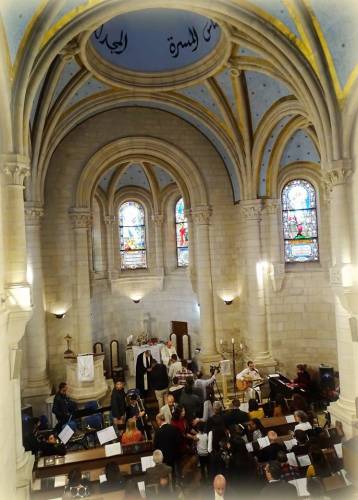 One of the first things I learned about Suhair is that she lives in the village her family is originally from and where several members of her extended family currently live, a village just outside Jerusalem called Bir Nabella. Though she grew up in Maryland, Suhair spent her childhood summers in Bir Nabella, and even a few years of elementary school. Her parents wanted her to learn the language, know her family, and be connected with her heritage. The village was always oriented toward Jerusalem—culturally, religiously, socially, economically. In 1967 Israel occupied the territory and declared that it was now annexed to Israel as part of the municipality of Jerusalem. Though the state considers the land to be Israel, it did not give the residents citizenship, but rather “Jerusalem residency,” which confers no passport, no national voting rights, and no security of ongoing residency.

Israel built highways through the area, extending through sections of the West Bank, to connect Jerusalem to Tel Aviv, as well as to various settlements. These highways are off-limits to most Palestinians, and for that reason Israel built high walls on either side of the highways. Though officially part of the Jerusalem municipality, Bir Nabella is now caught between these walled highways, which its residents cannot use. A tunnel underneath the highway serves 12 villages and points them toward Ramallah, not Jerusalem. Residents of Bir Nabella are forced to use the Qalandia checkpoint to access Jerusalem. What was a seven-minute drive in Suhair’s childhood has become an hour’s journey at its shortest. Suhair must take a taxi to the checkpoint, wait in line at the checkpoint for an undetermined amount of time, then take a bus the rest of the way to her destination in Jerusalem. The morning she was to meet me, the only other checkpoint in the area providing access to Jerusalem was closed, making Qalandia a chaotic mess. The taxi had to drop her off a mile from the checkpoint, forcing her to walk in the rain, before arriving and lining up behind more than 100 people. This is Suhair’s normal commute to work at the YWCA in Jerusalem. She told me she started having panic attacks after she began commuting through the checkpoint on a regular basis.

I am amazed at Suhair’s vibrancy and perseverance in the face of such daily obstacles, but even more impressed by the work she’s doing. She is supporting initiatives inspired by UN Resolution 1325, which affirms the importance of the role of women in the prevention and resolution of conflicts, their equal and full participation in such efforts, and calls for all parties to work for the protection of women and children.  This work is being done at the international level, but Suhair described one initiative happening at the local and grassroots level.

The YWCA held a workshop with women in a refugee camp on what Resolution 1325 meant to them. They brainstormed a problem tree to prioritize which issues they most wanted to address in their community. The women ultimately chose the increasing problem of drugs since refugee camps are not the responsibility of either Israel or the Palestinian Authority and therefore lack policing. The women, supported by trainings and the resources of the YWCA, launched a campaign to educate their community about drugs. They asserted their right to sit on the local council. They worked with the United Nations Relief and Works Agency (UNRWA) to raise awareness in the schools and with the Palestinian Authority to coordinate police efforts. The women were later invited to speak at an international conference about their accomplishments, and the campaign is sustained to this day. As one woman told Suhair, “The drug dealers now know we exist, and that we women at least are not afraid of them. They know not to come near our children.”

Maseeh Qam! Haqqan Qam!  May Easter blessings of hope and new life be yours this season.