Share God’s love with our neighbors-in-need around the world through One Great Hour of Sharing.
Make A Donation Click Here >
Home › What We Do › Where We Work › Co-workers › Striving to Hold Fast to Hope

A Letter from Tracey King-Ortega, serving as Regional Liaison for Central America, based in Nicaragua

This newsletter comes to you from sunny southern California. My three children and I are refugees of sorts. Quite privileged ones, but escaping a situation of insecurity, uncertainty and violence, nonetheless. With dual nationality for my children and my own US passport, crossing the borders was the easy part. Leaving my husband behind to care for our home and not risk losing a steady job in the deteriorating economy of Nicaragua has been a painful decision to make, but we rest in knowing that our children come first. We are so grateful for family whose open arms provide us with a safe place to land and a community of support around us, sustaining us with prayers. 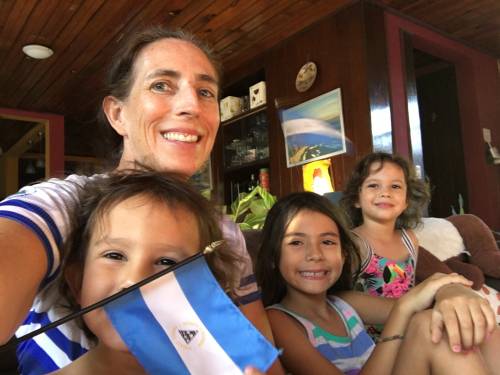 I struggle with explaining what is happening in Nicaragua. I have my opinions and perspective, but I always try to present the opposing viewpoints, because most likely the truth falls somewhere in the middle. People are protesting an increasingly authoritarian government and are determined that for there to be democracy and justice, President Daniel Ortega must go. These protests have been met with extreme repression carried out by police and para-military forces and, depending on your source, somewhere between 200 and 400 have been killed. Those who have been injured number more than 2000. Hundreds upon hundreds of arbitrary arrests and detentions have occurred. Those supportive of the Ortega government see the recent uprising as an attempted coup orchestrated by the CIA, and they blame all the violence and death on “right-wing coup-mongers.” They praise this government for having made strides in the economy and helping the poor, but seem to turn a blind eye to the systematic erosion of democracy, consolidation of power, and other concerning decisions and actions made by Daniel Ortega over the years, let alone in just these past four months. 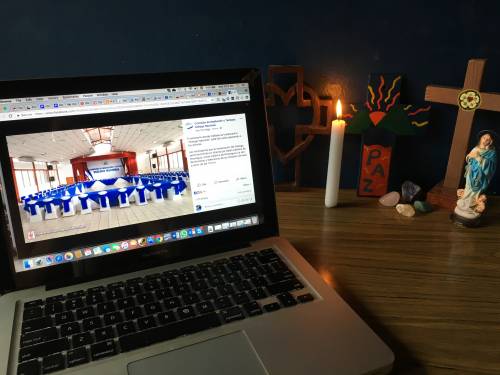 The day the national dialogue began, all I could do was light a candle, say a prayer and watch, trying to hold fast to hope.

On a very personal level, after making hard choices for my family situation, one of the most difficult aspects for me of the current conflict in Nicaragua has been reconciling contradictory interpretations of what is happening. People I have known for years, whom I love and respect, see things very differently. It has caused me great angst and even tears. It is as if we live in these two parallel universes. I have lost sleep trying to navigate these two worlds. I have made the intentional decision to maintain open communication with those who think differently and go out of my way to read other perspectives and try not to let myself be comforted by confirmation bias. A friend and former colleague of mine, in a very calm and pastoral way, has pushed me to stay in the conversation even though we don’t see eye to eye. There are times we’ve agreed to disagree, but by staying engaged, and respecting one another, we hope to get beyond our differences and somehow help people to move beyond the finger-pointing at one side or the other and look for a way to build peace. Hope lies in building and maintaining relationships. As much as I may want to argue politics, and I’d like to think that my faith informs my viewpoints, I think our faith should first simply lead us to love, to build bridges, not walls. In the words of theologian Paul Tillich, “the first responsibility of love is to listen.” Not always easy, but I sense that we could use more of this here in this country as well.

In all this, I stumbled across this quote by Henri Nouwen. It put new words and perspectives on ideas of faith and calling that I’ve been wrestling with. It reads: “In a world so torn apart by rivalry, anger, and hatred, we have the privileged vocation to be living signs of a love that can bridge all divisions and heal all wounds.”

Over the past four months, I have felt the rivalry, anger and hatred of the world more acutely than I had ever thought possible. It’s hard, and many times I’d prefer to lick my wounds with like-minded people. But where is the hope on that path? In the midst of complexity and polarizing politics, in what seems to be to parallel universes, we have choices and an alternative vision and example as taught to us by the living Christ. We can choose to bridge divides and heal wounds because we are blessed, we are lavished with grace and we are charged with a greater purpose. God pursues humanity — all of us — with relentless love. How do we honor and embrace ALL, love ALL? How do they know the gospel is true? We name, we see, we recognize and we lift up the vulnerable. That is what we must be doing as Christians. We believe and live out the truth that God loves you. And God loves me.

Thank you for the prayers and support that have served as real sustenance in uncertain times. Please join me in prayer for the people of Nicaragua whose lives are absolutely turned upside down with no clear path forward.