Building a Life of Faith. Support the Pentecost Offering.
Make A Donation Click Here >
Home › What We Do › Where We Work › Co-workers › A Small Church with Dreams

A letter from Josh Heikkila serving as Regional Liaison for West Africa, based in Ghana

In May, after almost seven years in West Africa, I had the opportunity to visit Liberia for the first time. The main purpose of the trip was to accompany a delegation from Westminster Presbyterian Church, from Albany, New York, on a visit to a rural primary and secondary school they have been supporting. But it was also a chance to make a short visit to the Presbyterian Church of Liberia.

The Presbyterian Church (U.S.A.) and the Presbyterian Church of Liberia (PCL) have a long, and perhaps you could add complicated, relationship. Liberia was the first place the predecessor of the current PC(USA) sent missionaries. It was in 1833. But in the 1890s the church’s mission board decided to focus efforts elsewhere, and all American Presbyterian missionaries were either recalled or relocated to other places in Africa. 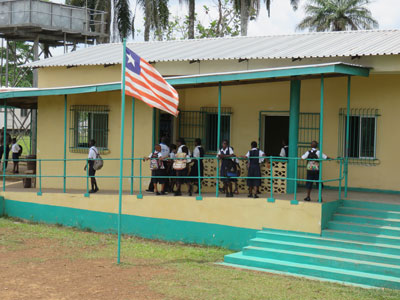 While the “Presbytery of West Africa” remained part of the PC(USA) for another 40 years, it finally gained autonomy as an independent denomination in 1931. Since that time the interaction between our churches has diminished, and for the past half-century it has been practically nonexistent. But many church members in Liberia and in the U.S. are now hoping and asking for things to change.

The past three decades have not been kind to Liberia. In 1989 a civil war broke out that lasted for most of the next 14 years. It ripped the country apart, killed more than 200,000 people, and destroyed much of the fragile infrastructure. As the country was beginning to recover, the Ebola epidemic hit hard, killing thousands more and isolating the country from the rest of the world.

Although no members of the Presbyterian Church of Liberia died in the Ebola epidemic, the church spoke to me about the fear that gripped the country in that period, and the feeling they had of being abandoned once again. I was grieved to know that I didn’t do anything to help them and wasn’t able to enlist others in the effort, either. But despite all of this turmoil and suffering of the past three decades, the church is looking forward in hope. 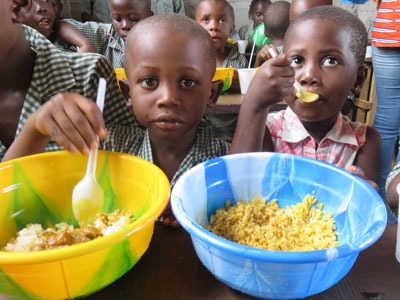 Children eating lunch at Hope Mission School, a rural primary and secondary school supported by Westminster Presbyterian Church of Albany, New York. The connection with this school started because of a Liberian-American who is a member of Westminster.

The PCL remains a small denomination, with perhaps no more than 30 congregations. But they have dreams of growing as they implement plans to preach the gospel in rural areas and grow ministries of service and compassion. The church has begun reopening schools that closed during the civil war, and there are plans to start a university with special emphasis on education and health. I only pray that the PC(USA) can find a way to accompany them in these endeavors.

One thing that caught my attention while I was in Liberia was this date, 1833, when American missionaries arrived and the First Presbyterian Church of Monrovia was founded. The date brought back to mind the First Presbyterian Church of Chicago, a congregation where I worked for three years while in seminary, which was also founded in 1833. It was an odd coincidence that stuck with me during the visit to Liberia. 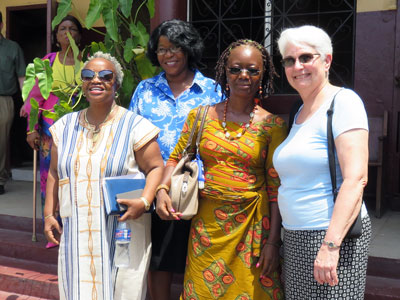 I was impressed by the women in pastoral and church leadership in the Presbyterian Church of Liberia. Here three pastors of the PCL pose with a visiting pastor from Albany Presbytery.

Like many smaller congregations, the First Presbyterian Church of Chicago is made of up teachers, social workers, health care professionals—in general, people who are committed, and who have dedicated their lives, to the welfare of the community around them. When I met members of the First Presbyterian Church of Monrovia, I was seeing the very same thing. Here was a group of Christians who, despite many great obstacles, was trying to live as faithful disciples of Jesus Christ in service and witness. I was proud of our Presbyterian heritage and felt very much at home.

In the months ahead Presbyterian World Mission will be discussing the feasibility of getting a partnership with the Presbyterian Church of Liberia off the ground again. I ask for your prayers, as the PC(USA) and the PCL discern where the Holy Spirit is leading us.

As always, I thank you for your generous support—your prayers and your gifts of money—which allow us to stay engaged with our Presbyterian sisters and brothers in West Africa. Please continue walking with me in mission partnership, even as we discern the possibilities for renewed partnerships in mission.