A letter from Dennis and Maribel Smith, serving as Regional Liaisons for South America, based in Argentina

Advent, for us, has long been connected to the themes of migrants and refugees. Living in Guatemala for so many years put us in contact with many friends who had been displaced by conflict or had decided to take the risky journey North. We began to see the story of Jesus’ birth through their eyes. For example, we understood that Mary and Joseph were on the move from Nazareth to Bethlehem because of a decree imposed by an invading foreign power. A look at the map shows that their journey was probably about 80 miles on foot, a difficult challenge considering that Mary was very pregnant at the time! When they finally arrived, they found accommodation only in a rough shed or cave, shared with livestock.

Not long after, they were forced to flee when Herod, the local strongman who had sold out to the invading power, began a murderous campaign to slaughter all male children in the region under the age of two. Influenced by his meeting with the magi, he was afraid that these infants somehow represented a threat to his authority! So, Joseph, Mary and Jesus were forced to flee into exile in Egypt. There they remained until Herod died. 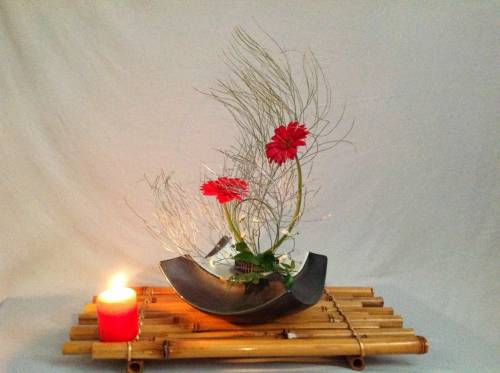 Blessings! Maribel prepared this Advent arrangement for our family of supporters in the Ikebana style.

I’m convinced that those early years in Egypt stuck with Jesus in some way. Perhaps it was in exile that he developed a sense of empathy with those on the margins of society. Perhaps his time in Egypt made him more open to reaching out to Samaritans and even a Roman soldier.

In our case, I know that when we see migrants and refugees struggling to survive in today’s world we see in them the face of Jesus.

In late August, I got an email from Rev. Joe Keesecker, a friend who, together with his wife Selena, served for several years as a mission co-worker in Guatemala. The Keeseckers are now retired and living in Phoenix. Their church provides services to immigrants at a detention center near there. Joe wrote with the news that Angela, an Argentine woman, would soon be deported. Could he give her our contact information? Of course, I replied. Joe explained that she had been living in the US without documents for 20 years and had two children and a husband on the East coast.

Angela’s phone call came a couple of weeks later, on a Thursday. She had just arrived in Buenos Aires early that morning and had nowhere to go. She came to the apartment and we talked. She had worked for years cleaning houses and offices, she explained, but had developed a severe problem with her knee that made work impossible. She needed surgery.

The procedure would have cost thousands of dollars in the US, so Angela decided to return to Argentina for treatment through the national health system. Then, since she had no visa to enter the US—a requirement for boarding an airplane—she decided to travel overland by bus, a journey of over 5000 miles.

At the US border, she turned herself in, hoping to apply for asylum. She was detained for nine months in Arizona before being deported; that’s where she met the Keeseckers.

As Presbyterians, we do mission in partnership. When Angela called, Maribel and I knew that we had little expertise we could offer to Angela, but we knew that our local colleagues had long experience of aiding migrants and refugees. I first called a Methodist colleague. He offered Angela a place to stay at their guest house over the weekend.

Then I called CAREF, an ecumenical agency that was created back in the 70s to deal with the flood of refugees fleeing Pinochet’s Chile. Since then, they have done pioneering work in refugee resettlement and in combating human trafficking. CAREF is providing Angela with legal advice and has put her in touch with Argentine social services. The Waldensians are one of CAREF’s member denominations; one of their congregations has been able to provide Angela with temporary lodging as well as a local faith community. Maribel has been available to Angela as a friend and confidant.

But major challenges remain. The job market in Buenos Aires is very tight, unemployment is growing, and Angela has yet to find a job. Her bad knee still makes cleaning work difficult, so she needs to receive job training. Without a job, she can’t find an apartment, even with a government housing subsidy. Most of all, she desperately misses her children. Please pray for Angela!

Each refugee, each migrant, has a story to tell. Reaching out to refugees and migrants in your community would be a great way to celebrate Advent! Certainly, as we enter this Advent season, when we see Angela we see the face of Jesus.

In personal news, our Interpretation Assignment has begun, and weekends are fully booked from now through our return to Argentina on February 14th. We would, however, be available for mid-week events or Skype meetings during the week with your mission committee. Let us know when and how we can connect with you to share how God is working through our PC(USA) mission partners in South America.

The big news in our family is the birth of Alan, our first grandchild, on August 16! How thoughtful of our son Lucas, Alan’s Dad, to be living in Louisville just where we’ll be hanging our hats while we’re in the US! We’ll also be seeing some of you in the Pacific Northwest as we visit my parents in Oregon for the Christmas holidays.

As 2017 ends, we are deeply grateful to have you as part of our family of supporters. Your prayers, your frequent correspondence and your generous financial support through Presbyterian World Mission are a constant source of strength and hope. May Advent be a time of reflection and growth, and may 2018 be for you a time of life-affirming challenges.