Register today for the June 23 (2pm EDT) online Matthew 25 event that will look at hunger and food insecurities.
Make A Donation Click Here >
Home › What We Do › Where We Work › Co-workers › “Your Right Hand, O Lord, Glorious in Power”

What do these three places have in common? On January 24, churches in Hong Kong gathered together for an evening Unity Service with liturgy from the Caribbean and a sermon by a Filipino missionary priest.

Of the three ecumenical services held in Hong Kong during the Week of Prayer for Christian Unity, this one at Community Church was the one closest to my heart. Each year, I am responsible for organizing the international service conducted in English in cooperation with the Catholic Church. The resources for 2018 were prepared by the churches of the Caribbean. Still, there are many issues to sort out. Where will we have it? Who will be the preacher? Do we use familiar hymns or try something new? 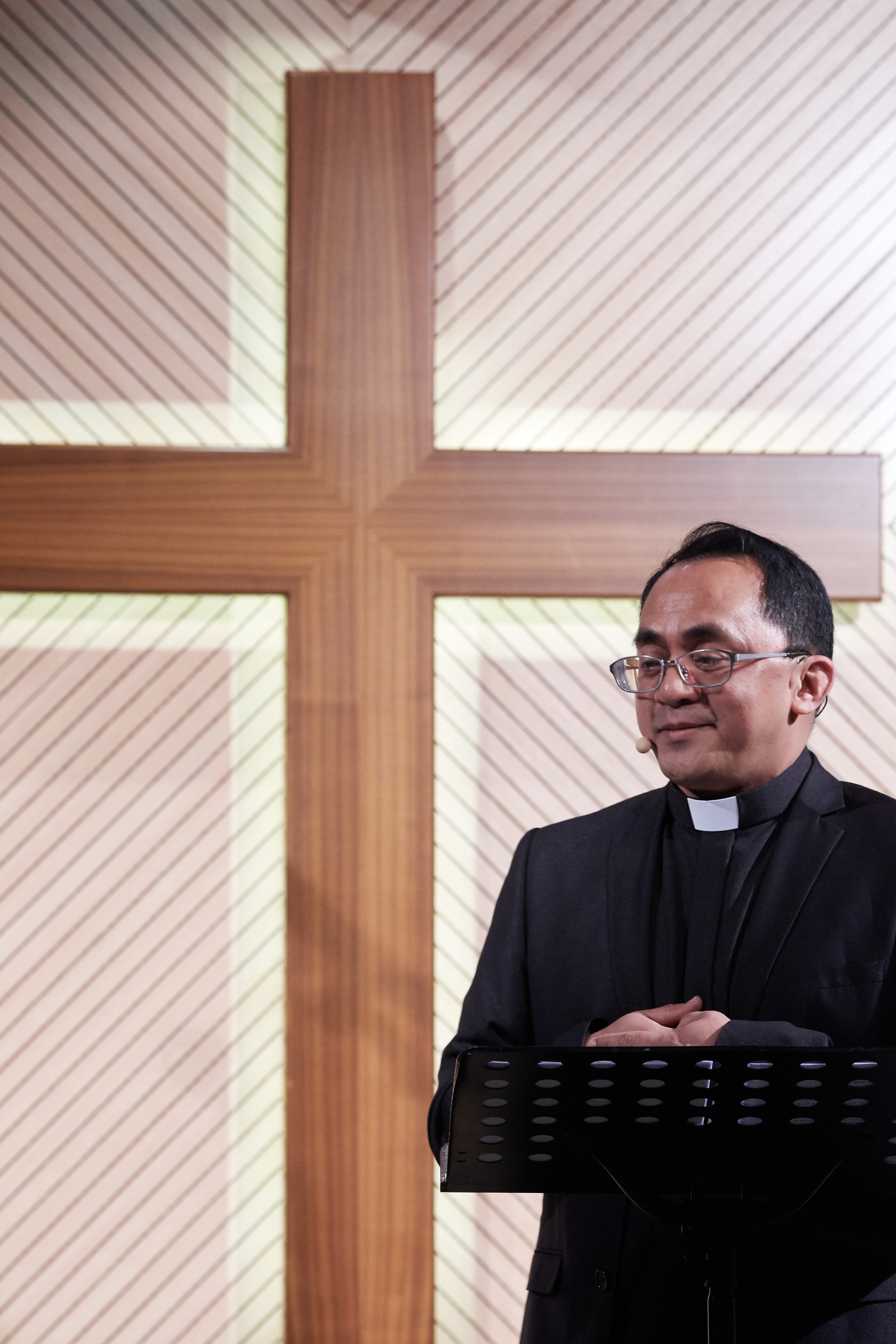 We decided to invite a different church to host this year, one that had not participated in the ecumenical worship before. Community Church is located on the second floor of an office building in a busy commercial district. However, it was close to a Metro subway station, so I was confident that people could find it. The preacher was recommended to us by the Catholics. Fr. Jovito Dales is the chief financial officer of the Missionary Society of St. Columban, which has its headquarters in Hong Kong. He had given radio talks before on our ecumenical broadcasting, so I knew that he would have something inspiring to say on the theme “Your right hand, O Lord, glorious in power” (Ex. 15:6). As far as music, we wanted hymns that reflected Community Church’s worship style as well as the themes of liberation from slavery, fear and death. We chose contemporary hymns, some with familiar tunes, others combined with old favorites. The Caribbean “Halle, halle, halle” would be sung before the Gospel reading from Mark, the story of the hemorrhaging woman and Jairus’ daughter.

On the night of the service, I was thrilled to see old and new friends streaming into the modern worship space. One of the nice things about having the service in a new church was the high-tech sound system. Since we were recording the service for later broadcast on RTHK-Radio 4, it was wonderful to hear how clear and crisp our voices sounded. When Fr. Jovito preached his sermon, one could sense the congregation’s keen interest as he shared stories of his experience in the Philippines with HIV/AIDS patients and in Cambodia with landmine victims. He challenged the listeners to reach out to those who have given up hope, and to “get up” to serve the least and the lost in one’s own neighborhood. 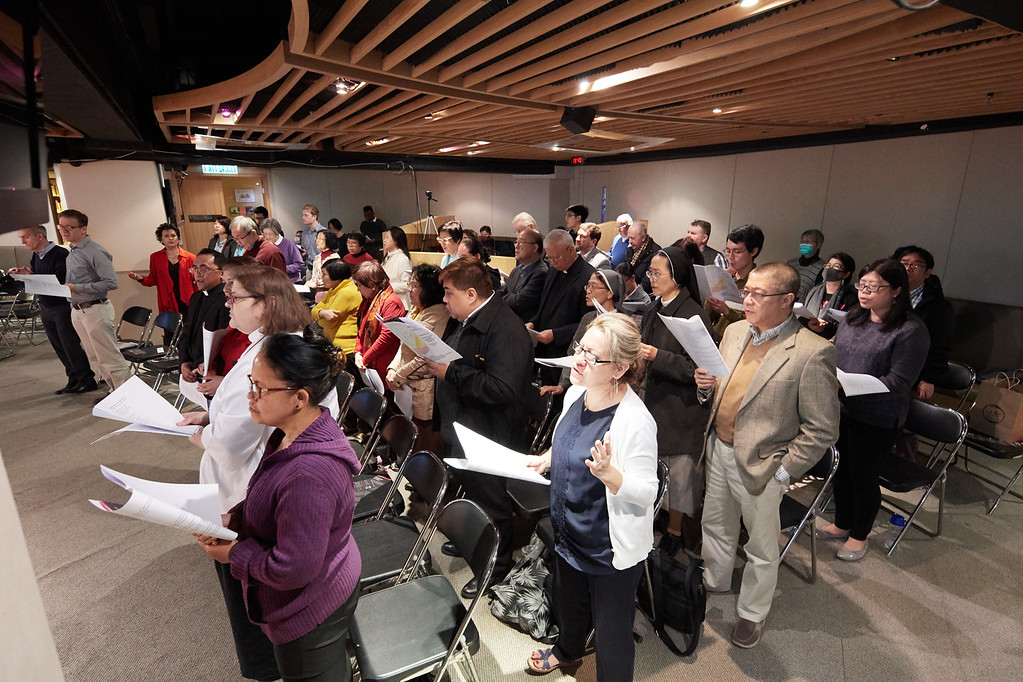 As the service ended, I stood by the exit to receive the offering. The donation was given to a Christian organization called STOP. The name stands for “Stop Trafficking of People” and works in partnership with the local community to end human trafficking in and through Hong Kong. I had come to know STOP at a justice conference held last year among the evangelical churches. It was a perfect choice for the offering to raise awareness on the issue of modern-day slavery and to highlight this worthy initiative from the Christian community in the city.

Later, I sent photos of the service to the editor of the Hong Kong Catholic newspaper. To my surprise, he asked me to write a short article to go with the pictures. I listened to the service again on the radio broadcast to recapture the important moments. So, after sending in my 500 words, my last task for the Week of Prayer for Christian Unity was completed. 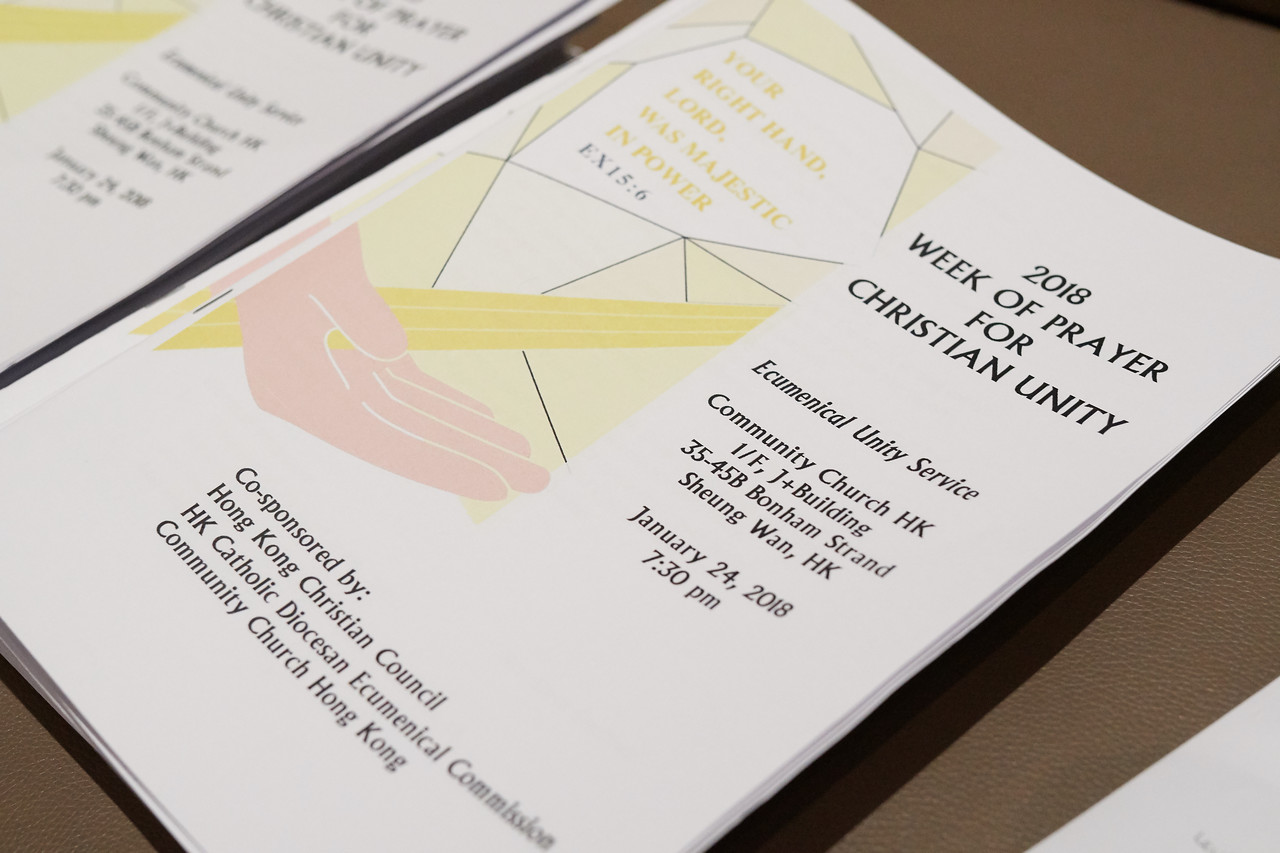 Looking back, I realize how much effort it took to plan this simple one-hour service. But it was worth it all because this is the hard work of Christian unity — to reach out to those beyond the ones we know in the body of Christ, to be welcoming and inclusive in small matters and large, to be global and local in scope, and to “sing a new church into being, one in faith and love and praise” (“Sing a New Church” by Sr. Delores Dufner).

In closing, let me thank you for your faithful support of the ecumenical movement that builds bridges with the world through Presbyterian World Mission. Your prayer support and financial gifts spread the gospel of Jesus Christ to the four corners of the earth, and most certainly in Hong Kong and China!