A letter from Michael and Rachel Ludwig serving in Niger

A neighbor with whom we’d been building a close relationship came over to bring us greetings the day after we arrived back at our house. After exchanging warm greetings we were walking back to the gate when the man remarked about one of the fruit trees in our yard that had begun to dry up over the past year. He told us in his language that while we were gone he saw the owner of our house cut off all the limbs of this tree, and it was in the state of death. But that only lasted three days—then it started sprouting new branches and leaves until now it was starting to look bushy. Then with a smile he remarked that it was just like the prophet Jesus who died and came back to life after three days. I said, “Wow, that’s great, you know Jesus?” He said, “I know a little, that he is coming back again to collect his followers.” Then he changed the subject as he was on the way out the gate, but I was amazed at this openness in our greeting. 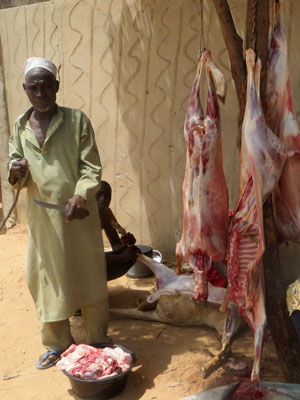 Our neighbor, shown here butchering rams for a festival, who has three wives and many children to take care of as he nears retirement age

For the past two years we’ve been walking with this man through tragedies in his family and a kidney surgery ordeal a few months ago. We’ve been praying for his large family and also for him to experience the peace, health, and love of Jesus. In gifts we’d given to his family at Christmas we’d broached the subject that God’s love shown in giving Jesus is the reason we are here to help, but we’d never spoken further with this family about faith. Now we feel like there is some new openness for us to share more about what we believe, and to learn more of what they believe in a deeper relationship.

We’ve been thinking a lot about trees and newness because it’s the rainy season in Niger. This is the time when all the trees that are customarily cut back drastically at the end of the dry season really come back to life, and some grow back with amazing speed. We see it’s also a time of energizing for our church partners, the Evangelical Church in the Republic of Niger (EERN), and ourselves. For us, we’ve just experienced two months of telling the story of our partners in Niger to churches back in the U.S. While the schedule can be grueling, it’s energizing to see people’s interest in this place, understand all the prayer and support these churches are engaged in, and reemphasize for ourselves the focus that God has given us for the work here. For the EERN, we’ve come back to see they are re-energized in their efforts of outreach to their country. Immediately they were excited to report on the success and difficulties of the first new churches they’ve established in their goal of creating a Christ-centered community in each of the 52 governmental districts where there is no church presence. They also strategically rearranged some key leaders while we were gone, are gaining extra training to expand their radio outreach, and have completed all their projects for rebuilding physically and relationally at the churches where there were riots in 2015. We can see the pruning and growth of new life from Jesus at work in ourselves and our partners in all these movements.

Going forward, we hope to discern the new possibilities popping up for the Community Heath Evangelism (CHE) training program the EERN is working on. Specifically, identifying a few key leaders who are of like mind and capable of the task of training. The national leadership can see that CHE is part of the new possibilities for energy and life in this new season because it has the potential for transforming the way the church does things, spreading out power by empowering disciples and working toward sustainable well-being for communities. In the Fall I’ll be teaching a class at one of the Bible schools on CHE and helping the EERN discern what leaders have the right education and passion to lead a national training program in the next year. 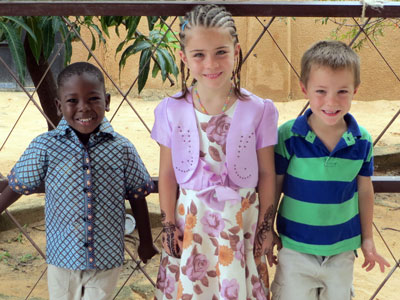 There’s another area of growth that our family has been working on, and so we’re happy to announce that our adoption of a 4-year-old boy from an orphanage in the capital has finally been completed! He has done a great job of being flexible with all the changes and has been very quick to pick up a lot of understanding of English. It was a blessing to have him travel to meet our family in the U.S., and now we’re in the middle of the real growing pains of adapting to a new routine at home and in home school with three children in three different grades!

As we move through a rainy season with all this growth and pruning, we pray for each of you to also be given eyes to see what gift of new life God may be working in you. We hope you will continue to stay engaged with Niger, praying for the efforts of the EERN and our family, connecting with us on things you’re interested in, and supporting this ministry with your financial gifts! We know all these forms of support are vital to our partnership in Niger, and so we invite you to also consider supporting other mission co-workers in our area or different parts of the 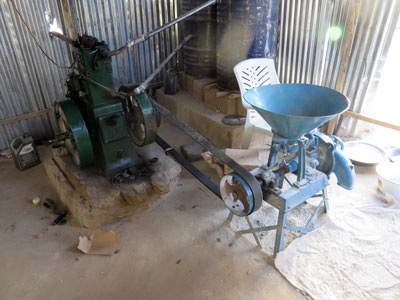 The grain-grinding machine, which was purchased with funds from U.S. Presbyterians, for a church rebuilding relationships with its neighborhood

world. If it weren’t for you and other mission-focused U.S. Presbyterians who have been active in support, World Mission wouldn’t be able to report that all the financial goals were met for the past year, and if this momentum continues our mission sending will have a healthy future. You can find out more at www.pcusa.org/missionconnections. We rejoice in this growth and in the truth that “It’s not the one who plants or the one who waters who is at the center of this process but God, who makes things grow” (1 Cor. 3:7 The Message).