A Letter from Esther Wakeman, serving in Thailand

I was glued to the news for two weeks as the harrowing adventure of the “Wild Boars” soccer team and their coach stuck in a cave about three hours north from where we live unfolded, praying and hoping that all would end well. I was awestruck when I learned that the diver who found the boys did so when he came to the end of his rope! He had taken a rope into the cave’s tunnels so he and his diving partner could find their way back. When he came to the end of it, he popped up out of the water, and right in front of him were the boys and their coach. John Volanthen, the diver, said, “I dive for passion, and always wondered if it would have purpose. The last two weeks was what I prepared for my entire life.”

At Payap University, where I work in Chiang Mai, Thailand, one of my main jobs is introducing students to our five core values; one of them is “Service through Vocation.” We ask students to reflect on their talents and passions, and invite them to consider the possibility that a loving God gave them these as gifts to use in doing the good works God has prepared for them to do, as we learn in Ephesians 2:10: “For we are his workmanship, created in Christ Jesus for good works, which God prepared beforehand, that we should walk in them.” John Volathen is a lovely and extraordinary example of this, and I enjoyed being able to use his words and example in the workshop I taught this semester.

As those of you who also followed this story know, all of Thailand, and many people around the world, rejoiced when all 12 boys and their coach were brought safely out of the flooded cave. It was a brilliant effort of humility, courage, and cooperation among people of many nations coming together on behalf of a few young lives. The story inspired a yearning for similar efforts to bring freedom to people trapped in other situations of danger here in Thailand, and around the world.

The rescue was also a superb picture of grace — precious people trapped in the dark and unable to get out on their own were sought, found, and brought into the light, where they could rest, be fed and be restored to their families and community. As Christians, we understand that God is on a mission to save us and to reconcile and restore all of creation under the Lordship of Christ. Just as John Volanthen experienced the deep satisfaction of being wonderfully useful in the rescue of the young Thai boys trapped in the cave for two weeks, we are each made for deeply satisfying work as we participate in God’s reconciling and restoring mission in the world. 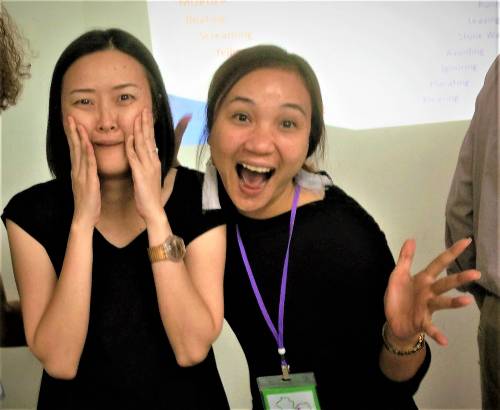 As participants in a two-week intensive training in the “Living Wholeness Framework” of Christian counseling and discipleship introduced ourselves, Ying told us that she became a Christian in 2001, when she was a student at Payap University. Ying is one of four Thai Christian counselors participating in the training. She and I are in the same “transformation group” part of the training, where we share how our hearts are being touched by what we’re learning. We are both being blessed deeply — our tears together reveal it! She’s had some lonely moments working in a counseling center as the only Thai and is so grateful to be getting to know three other Thai sisters who are also passionate about counseling and who are eager to serve the church using their gifts in counseling to join God and each other in God’s healing mission in Thailand. Another exciting development that will strengthen these young women and many other Thai Christian counselors is that conversation has begun on starting a Thai Christian counseling association. The workshop leader is active in the Asian Association of Christian Counselors and is initiating and supporting this conversation. 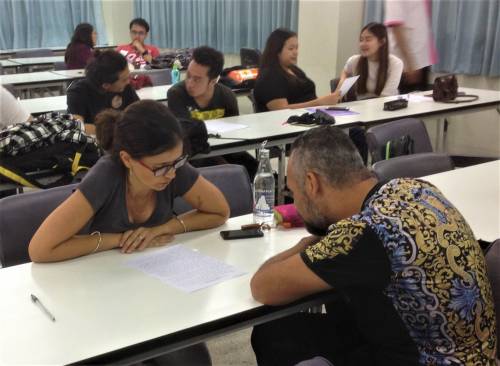 Students sharing their “life story” with each other as they consider our core value of “Delight in Diversity.”

Good progress is being made toward putting on the Association of Christian Universities and Colleges in Asia (ACUCA) conference in October on “The Internet’s Impact on Identity and Character Development of Students in Asian Christian Higher Education: Issues and Solutions,” which I shared in my last letter. I hope student and adult participants will both appreciate and apply what is known about the importance of joyful, face-to-face interaction in the development of identity and character in the 60 Christian schools that are part of this association across Asia.

I’m grateful for the passion God gave me to seek to understand the human heart, and to learn to cooperate effectively with God in nurturing disciples who are growing in love, joy, and maturity. I’m grateful to be a part of God’s mission here in Thailand, learning with the Christian community and teaching about how God made us, and how we can help each other heal and grow. Please join me in praying for the development of effective and widespread Christian counseling that will help the church grow and also serve society. There are many ways in which we get stuck in dark caves and need God’s grace and love shown through competent and caring teams to bring us into the light, give us rest and time to heal, and restore us to our families and communities.

Thank you for the part you play in God’s mission here through your prayers and support. Your partnership is precious to me.