A Letter from Gary and Marlene Van Brocklin, serving as Regional Liaisons for South Asia, based in the U.S.

Individuals: Give to E200365 for Gary and Marlene Van Brocklin’s sending and support

Congregations: Give to D507568 for Gary and Marlene Van Brocklin’s  sending and support

The church we are attending in California has recently finished a sermon series on “Living Hope,” based on the illuminating epistle of 1 Peter. We are stimulated by the excellent preaching here, while we continue to be steeped in the struggles of living as a Christian minority in South Asia. Bridging distinct cultures has often been stimulating to us, and this continues to prove true after four decades of frequently crossing these culture bridges.

We must admit that sometimes we felt overwhelmed by the needs and challenges of ministering amidst sharp religious and political tensions in countries such as India and Pakistan. But now, living close to family for the first time in forty years, those sharp tensions have lessened a bit in our hearts and minds, so we can be more objective and reflective on what it means to be a part of a despised Christian minority. So, the Apostle Peter’s admonition to use the Gospel power of our Living Hope to suffer wisely as Christians seems less of an overwhelming burden and more of an edifying challenge. Here are some examples of such Living Hope amongst our international ministry partners.

“Therefore, let those suffering in accordance with God’s will entrust themselves to a faithful Creator, while continuing to do good.” 1 Peter 4:19

One excellent ministry partner is the United Mission to Nepal (UMN). In April, Marlene traveled to Kathmandu, Nepal, where she met Rev. Cathy Chang, Presbyterian World Mission’s Regional Facilitator for Addressing Migration and Human Trafficking in Asia. Their meetings focused on projects of prevention of human trafficking along the very porous border with India. “According to a 2017 study by the Indian paramilitary force guarding the Indo-Nepal border, there has been a 500% increase in trafficking from Nepal to India since 2013” (The Hindu, July 1, 2018). The UMN prevention efforts have helped train villagers on the frontier to face the schemes of traffickers in non-violent ways. And already some vulnerable children have been snatched out of the hands of ruthless traffickers.

While in Kathmandu, Cathy and Marlene worshipped with a Nepali congregation that revealed the dynamism in the Christian Church in Nepal. It is among the fastest growing churches in the world, despite the recent anti-proselytization laws passed by the Nepali government. Some church leaders respond to the new laws by trusting their Faithful Creator to grow their 3-million-strong church into a body of 10 million in the next few years. This is in a country of only 20 million inhabitants. Amazingly, even when Nepali Christians are imprisoned, they count it as a joy that they have a roof over their heads, food to eat and an opportunity to share the Good News with other prisoners.

Last week, we were able to deliver greetings from Nepal to a pioneering missionary to Nepal, Betty Friedericks, at her home north of Seattle. She was delighted to hear an update on the state of the church in Nepal. We give thanks for the sacrificial lives of those who have gone before us. 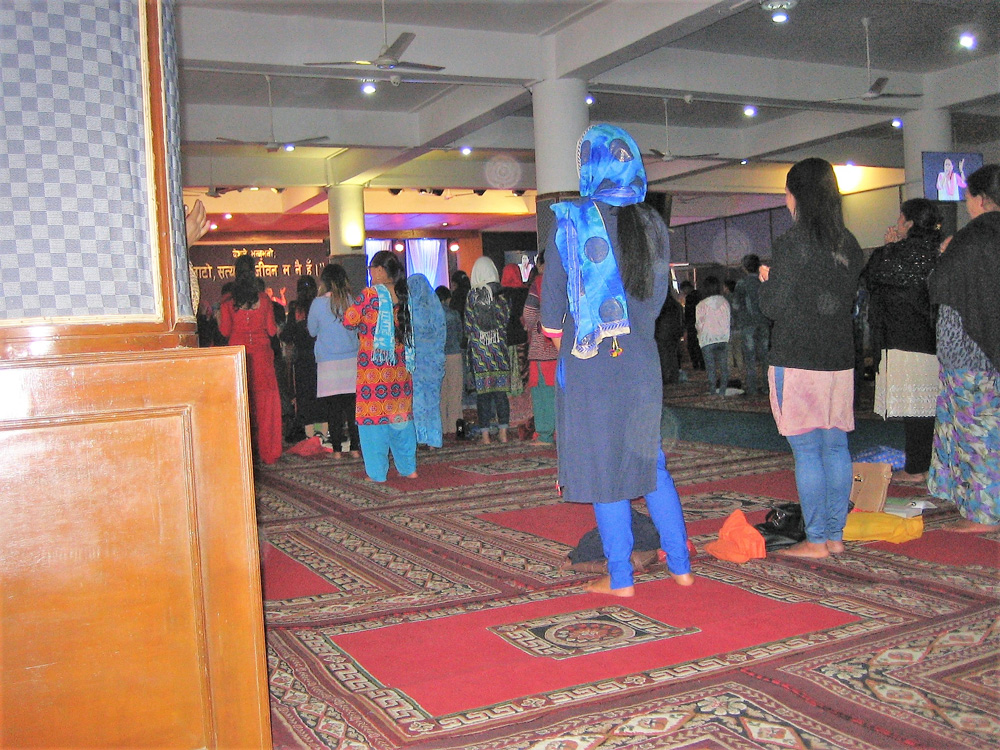 One of the international partners that is a fine example of “continuing to do good” in the midst of sharp tensions is Forman Christian University in Lahore, Pakistan. Forman is one of the most prestigious Christian institutions in Pakistan, but it too suffered governmental expropriation about 20 years ago. The governmental administration of Forman left it in such shambles that it has taken all these 20 years to bring back the physical plant to working order. Now, Forman enjoys a strong support base of generous Muslim and Christian alumni living within Pakistan and abroad. They are enjoying the bountiful blessings of their Faithful Creator as the students, staff and faculty take to heart the university motto “In love serve one another.” Recently, Gary attended a Forman Board meeting where Professor Saeed Shafqat was recognized, receiving a prestigious award from the Governor of the Punjab for his public service as an academician.

We celebrate God’s faithful care of the Javaid family with whom we worked closely for the entire time that we lived in Sri Lanka. The father, Indrias Javaid, was a key administrator at a Christian hospital in Pakistan when he was kidnapped and held for ransom by elements of the Taliban. Thanks be to the God of abundant grace, the whole family survived that traumatic event with stronger, deeper faith and are in the throes of emigrating to the U.S., where we will help them adjust to life here. God is good, and we are glad to share the blessing of religious freedom and economic stability with a South Asian family who through no fault of their own have been driven from their jobs and home to seek survival as strangers in a strange land. Now they will have the opportunity to have some strangers invite them into their particular part of the household of God.

We recently visited Mountain View Presbyterian Church in Marysville, Washington, where we saw a beautiful expression of the LORD’s community of abundant grace. A few years ago, some emigrating families from the Presbyterian Church of Pakistan arrived at their doorstep wanting to be part of their worshiping community. The congregation has welcomed them with open arms, and now several dozen people regularly attend their Urdu-speaking worship service on Sunday afternoons. We were quite impressed with many of the Pakistani families who hold down two to three jobs at a time and are making great strides to build a new life for themselves amongst other caring Christians. Cultural bridges are being crossed each week, and this international house of God winsomely displays a living hope in Jesus Christ.

We are thankful for the generosity of faithful friends such as you who allow us to serve the church of Jesus Christ in South Asia. Your continued prayer, concern and financial support are a great encouragement to us.