A Letter from Joshua Heikkila, serving as Regional Liaison for West Africa, based in Ghana

Built on the Gold Coast of Africa centuries ago, Elmina and Cape Coast Castles are stately white-washed fortresses with a history that needs to be remembered. Many Americans who come to Ghana make a point of touring these castles, but they can be unsettling places to visit. The beauty of the structures themselves, set amidst colorful fishing communities on the tropical Ghanaian coastline, is a stark contrast to the atrocities that took place inside.

Originally built by European powers like Portugal, England, the Netherlands, and Denmark for the trading of goods like gold and ivory, dozens of castles on the Gold Coast ultimately came to be used for the trans-Atlantic slave trade. During a 200-year period that lasted from 1640 to 1840, an estimated 1.2 million human beings were taken as cargo and shipped from Ghana’s castles to the Americas. (In total, roughly 12 million Africans, in an area stretching from Senegal to Angola, were captured, enslaved, and brought to North and South America.)

During the tour of Elmina Castle, the guide will take you to a bright, vaulted hall, emblazoned with words from Psalm 132 that Dutch traders used for Protestant worship. It sits directly above the dark and dank chambers where male slaves were kept before they were loaded onto ships for the trans-Atlantic journey. You will visit the governor’s quarters, kept cool by a sea breeze, with expansive views of the ocean. But a balcony on the back side overlooks the female dungeon, where the governors chose sex slaves from among the women being held for transport.

The pull between such beauty and such evil is difficult to handle emotionally.

Looking down from the upper floors of Cape Coast Castle. The “Door of No Return,” where captives were loaded onto ships, is located in the large dark archway. 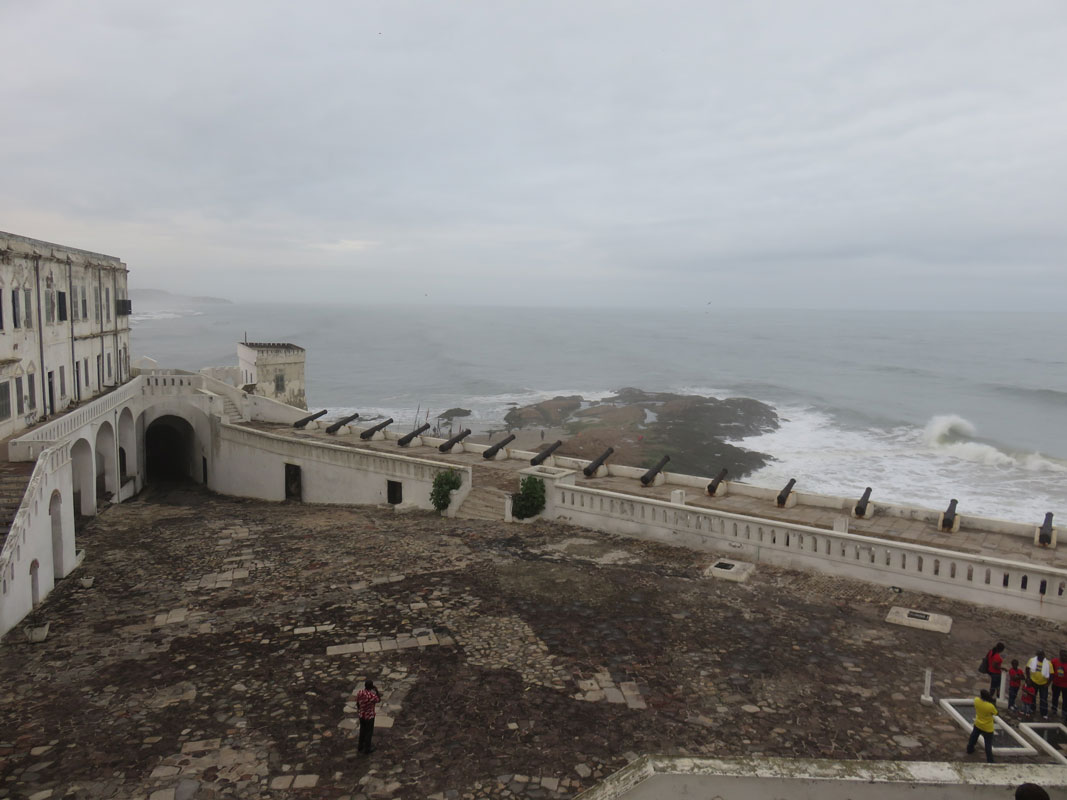 Image 1 of 5
Many people in Ghana today have an uneasy relationship with the castles. Some don’t like the association with the slave trade and would rather the places be known for their natural beauty and hospitable people. Some who are facing economic hardship look at the affluence of American visitors and — most likely never having learned in school of the deadly trans-Atlantic journey or the brutal institution of slavery — share their hopes of likewise traveling to Europe or America for work. Some acknowledge the atrocities that took place but struggle to understand how Africans could have joined together with Europeans to commit such horrors.

A number of years ago, Harvard professor Henry Louis Gates wrote an article for the New York Times, highlighting details of the slave trade that most people are unaware of. “Slavery was a business,” Gates explained, “highly organized and lucrative for European buyers and African sellers alike.”

“The sad truth,” he wrote, “is that without complex business partnerships between African elites and European traders and commercial agents, the slave trade to the New World would have been impossible, at least on the scale it occurred.” Gates’ article can be found here.

These complex business partnerships involved ethnic groups like the Asante, who were known to take captive neighboring peoples during inter-tribal warfare. They then shackled and marched these captives hundreds of miles to coastal forts, where the Fante people sold them to Europeans in exchange for manufactured goods. The Europeans traders then took the captives across the Atlantic, where they were sold into the slave economy. It was a commercial relationship that lasted on the Gold Coast for two full centuries.

There’s a plaque in Elmina Castle, put there in more recent times, that has a line that reads, “May humanity never again perpetuate such injustice against humanity.”

It makes me wonder: “What powerful business partnerships exist today that allow for the continued dehumanization and subjugation of people? What are the things that we are turning a blind eye to that require our attention and desperately need to be stopped? Will future generations look back with shame on us and think, how could they have been complicit in such atrocities?”

In recent years, young men from sub-Saharan Africa have trekked across the Sahara Desert to try to take boats to Europe, with hopes of a more promising future. The Mediterranean Sea, in fact, has been called a graveyard because of the thousands of migrants who have drowned in it. Young women are being trafficked into prostitution and domestic servitude in Europe and the Middle East because the opportunities for them at home seem bleak. While the forms of trafficking and servitude are now much different, both continue to take place in the present day.

If nothing else, perhaps the castles can serve as a reminder of how quick people like us can be to deny the humanity of others, and to even turn against our neighbors, when our own personal interests are at stake. The castles can be a reminder that we need to remain vigilant, because if we don’t, the human tendency to sinfulness will allow the poor and the vulnerable to be taken advantage of again and again.

Across West Africa, the Presbyterian Church (USA) is supporting church partners to improve the lives of their members and communities. Programs in education, health, agriculture, and development in places like rural Ghana and Niger are making better the lives of men, women, and children in the region. As well-being improves, individuals and communities are better prepared to address the societal forces that can degrade and dehumanize the people in their midst.

In the future, I hope to share more stories of the positive impact our partners are having in the region with help from the Presbyterian Church (USA). Thank you again for your thoughts, your prayers, and your financial support that allow us to engage with our brothers and sisters in West Africa, as together we work towards life in abundance for all of us.