A letter from Bill and Ann Moore serving in Japan

Individuals:  Give online to E200388 for Bill and Ann Moore’s sending and support

Congregations: Give to D504894 for Bill and Ann Moore’s sending and support

As part of our work both of us have the privilege of speaking in chapel services at Yodogawa Christian Hospital (YCH) in Osaka, which is a ministry founded by the Presbyterian Church (U.S.A.) and operated by our corporation in Japan called “Japan Mission in mission partnership with the Presbyterian Church (U.S.A.),” also known simply as Japan Mission. From Monday through Saturday at 8:30 in the morning well over 200 YCH staff and patients gather in the chapel for a brief service of worship to begin the day. As Representative Director of Japan Mission, Bill recently spoke at chapel on the occasion of the 60th anniversary of YCH’s founding. He spoke about the Japan Mission’s efforts from YCH’s early beginnings to provide compassionate and loving whole-person healing of body, mind, and spirit to witness to the love of God that we know in Jesus Christ, the Great Physician. He encouraged the staff to let their lights shine every day as they cared for patients and carried out YCH’s ministry of healing. 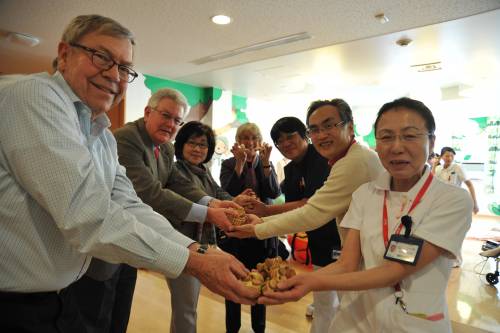 After the chapel service ended and the staff rapidly dispersed to their respective workstations, a man wearing pajamas remained behind. He was immediately identified to Bill as a patient, because in Japan it is the custom of inpatients to roam the hospital in their pajamas. The gentleman slowly walked to the front of the chapel, bowed deeply toward the cross and with tears streaming down his cheeks, softly uttered a prayer. Thinking that he was in distress, Bill approached him and asked if he cared to talk. It turned out that his tears were actually tears of joy and thanksgiving and that he had come to the chapel to thank God for the healing he had received. He entered the hospital with little hope for relief, but now that his illness was under control he had new hope for the future. God used Yodogawa Christian Hospital to give him his life back, so he was overcome with joy and felt compelled to thank the Lord. Like the one Samaritan among the ten lepers that Jesus healed, it was this one who came back to praise God and give thanks to the Lord.

It is experiences like these that fill us with joy as we lead Japan Mission in mission partnership with the PC(USA). The Board of Japan Mission, made up of Japanese Christians and members and ministers of the PC(USA), elected Bill to serve as Representative Director in 2013. Ann is also a member of the Board and we work together to move Japan Mission forward as a mission-accomplishing organization. 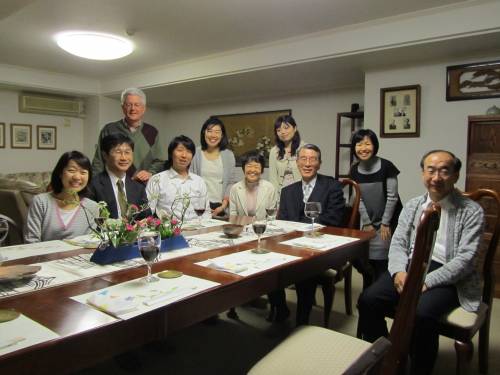 Staff of the YCH Chaplaincy visiting in our home

God is at work in Japan and it is exciting to see the results. In addition to operating Yodogawa Christian Hospital and directly supervising the large chaplaincy program there, Japan Mission relates to Christian schools, universities, seminaries, and welfare institutions that the Presbyterian Church (U.S.A.) has founded over its 156 years of witness in Japan. Also, we cooperate with the work of three Japanese denominations: the United Church of Christ in Japan, the Korean Christian Church in Japan, and the Reformed Church in Japan. Looking back over our century-and-a-half history, we thank God for having used Japan Mission in mighty ways to proclaim the gospel of Jesus Christ and to minister to the people of this land in God’s name. At the same time we look forward into the future and seek to discern how God is leading us into new ways of witness and mission. 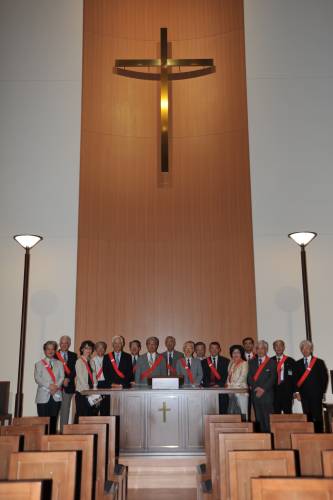 We are looking forward to being in the United States this spring and summer. Due to the challenges of beginning our assignment with Japan Mission, we are overdue an “Interpretation Assignment” during which we visit churches to share what God is doing in Japan. From the third week in April to the middle of June we will be based in Western North Carolina. After that we will travel to Southern California and be based in Pasadena through the end of August. We would very much like to visit with as many congregations as possible during this time, so please contact us by email at: william.moore@pcusa.org.

We feel very much blessed to represent the Presbyterian Church (U.S.A.) in Japan and we invite you to ‘come with us’ through your prayers, correspondence and financial commitment to this ministry. We are truly grateful to you all for your prayers and support, which give us the privilege of sharing the love of God in this land. While Japan is a relatively affluent nation, there is great spiritual poverty and hunger as fewer than 1 percent of the population know Jesus Christ. We are convinced that God is not finished working to bring all human creation in Japan to faith in the Lord. We are very much blessed to have a small part in God’s great mission.

May God bless you too as you serve and witness in the spirit of Jesus Christ.