A letter from Nancy McGaughey serving in South Sudan

Individuals: Give online to E200527 for Nancy McGaughey’s sending and support

Congregations: Give to D502951 for Nancy McGaughey’s sending and support

When I returned to South Sudan in early January, I thought March/April was so far away.  There would be lots of time to do the things I wanted to before returning to the U.S.A.  Now that time is almost here, and there is still much left on my list!

I did manage to get a trip in to Duk County, and to see more than just Poktop.  This is the first time I have been there on a Sunday and with help from the John Dau Foundation staff, I was able to find and join a worship service with Presbyterians there.  During the service I was able to present a banner made by members of New Hope Presbyterian Church in Springfield, Ill.  Later in the afternoon, I had the opportunity to sit with Pastor Paul and hear their story.  During the early days of the fighting in 2013/2014 they fled their village of Pajut and sought refuge in Poktop.  They arrived here to find the village deserted and homes burned down, but the church building was still standing.  They took the building as their own and have been worshiping here ever since.  Pastor Paul said, “When the crisis started, it was called one tribe against the other.  But it wasn’t the whole tribe that was fighting another tribe.  It was a fight between political leaders who happened to be of different tribes.  We wanted to live together in peace.   God calls us to practice forgiveness and live together in peace.  When we heard of our brothers and sisters suffering in neighboring counties, we invited them to join us.  Our church family now has members from both tribes.  We use both languages in our service so all can feel included.”    What an inspiring and humbling story.

“When the crisis started, it was called one tribe against the other. But it wasn’t the whole tribe that was fighting. It was a fight between political leaders who happened to be of different tribes. We wanted to live together in peace. God calls us to practice forgiveness and live together in peace.”
—Pastor Paul Pur Chol, Presbyterian Church of South Sudan, Poktop, Duk County 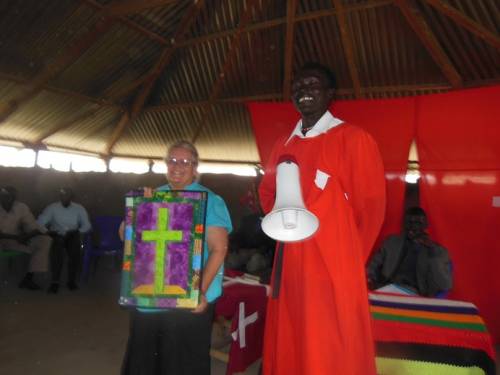 The purpose of my trip was to visit the nutrition program being run by our partner the John Dau Foundation.  I met Nyajima and her mother.  Nyajima’s mother had been told that if she did not take her daughter to Bor (a day’s journey away) she would die from severe malnutrition. But someone sent her to the nutrition center.  Her mother was skeptical, but soon gained confidence in the staff as she saw her daughter shed excess fluid and her appetite return.   “My daughter getting treatment she needed here in this area, and becoming healthy again, is the greatest miracle of my life.  I am grateful to the staff here and to those who have brought such a wonderful program to our area” she said.

During my two-day stay I was also able to visit Duk Payuel and the nutrition clinic in Duk Padiet.    I am in awe of the staff who are willing to live in these conditions (tents, temperatures above 110 degrees, flies, mosquitos) to serve their people.

A week later found me on the road to Bor again.  Unable to get a ticket on the helicopter going to Minkaman, I traveled by land cruiser to Bor (five hours on unpaved road).  We could have arrived an hour or more earlier, but my driver said he could go no faster “out of respect for your age”!  From Bor it was an hour in a speedboat across the Nile (probably my last boat ride on the Nile) to Minkaman.  But at least I was not traveling in a local canoe—I have been in these before and they are not the most stable means of transport.  The Nile is a beautiful river; it is but one of many things I will miss about this amazing country and its people. 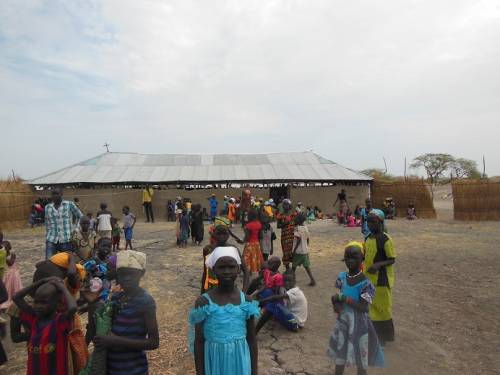 My destination was the Reproductive Health Clinic there, my purpose to investigate a maternal death earlier this month.  As is so often the case in South Sudan, there had been many missed opportunities to have saved the life of this woman.  My purpose was not to place blame, but to find out what could be done differently to prevent this from happening in the future.  We found many things, some as simple as posting the phone number for ambulance service, others like regular meetings of those working in reproductive health to share in-service trainings, challenges and resources.  Fortunately, after a very productive trip (I even got to practice nursing skills by taking blood pressures for 1½ hours during a very busy day) I was able to get a ticket on the helicopter returning to Juba and avoided another road trip.

I will be returning to the U.S.A. the latter part of April.  I will “officially” be on interpretation assignment May through July.  But it is quite possible you could talk me into sharing experiences of South Sudan beyond that date.  Before listing my traveling schedule, I want to take this opportunity to thank individuals and churches who have supported me through prayer and financially during my seven+ years in South Sudan.  I have been blessed beyond measure.  In the words of David, “my cup overflows.”  There is no way to express my gratitude but to say thank you and “May our Father bless you” as you have so generously blessed me.  I do not know what the future holds (retirement sounds a bit scary), but I do know who holds the future.

I do not have a phone for the U.S.A. yet but will get one soon after returning.  My e-mail address will remain nancymcgaughey1149@gmail.com.

July 21 – 31 Shenango Presbytery and New Wilmington Mission Conference
Please let me know if you would like to add on to any of these, or schedule another time.