A letter from Michael and Rachel Ludwig serving in Niger

How does “a church destroyed” recover from tragedy?  Our partners in the Evangelical Church in the Republic of Niger (EERN) have responded by following God’s call to become “a church rebuilding.”  They’ve discerned the need to focus on two areas: rebuilding their houses of worship and rebuilding relationships with their communities.  Recently I had a special chance to experience firsthand the hope being lived by this “church rebuilding.”  I traveled with some church leaders to encourage churches in the Zinder region of Niger, where persecution of Christians has traditionally been the strongest and where not many Westerners travel these days.  This region has not experienced the active conflict with outside terrorists that the eastern region of the country is undergoing.  However, it was hit hard last January by the riots over French religious cartoons, during which three EERN churches there were burned along with other Christian homes and businesses. 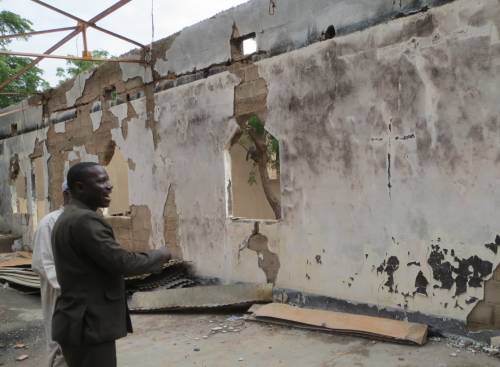 Now, almost a year later, these churches are still in the beginning phases of rebuilding.  In Niger’s second-largest city, Zinder, we visited a large church building standing in twisted and crumbling ruins.  The shape of a cross randomly scorched into the sidewall serves as testimony to the powerful way God is able to work even amid tragedy.  We listened to and prayed with the pastor who had been trapped in his office as rioters tore down the perimeter walls and set fire to church buildings.  He recounted how his prayers for rescue had been answered even as the rioters beat on the outside office door and put fire through the windows.  Eventually his motorcycle’s gas tank exploded in the entryway, which scared off rioters long enough for him to get out the door and through a break in the wall.  The congregation has started its rebuilding, with support from another partner church, by putting better walls around the church property, and it has rebuilt the office and a large meeting room that’s now functioning as a sanctuary.  The guard living at the compound still gets occasional threats at the gate, but he’s praised by the pastor for unflinchingly using these as a chance to tell bystanders about the saving grace he has received in Jesus.

The congregation in the small town of Mirriah is in worse condition—its mudbrick church structure was completely knocked down, the pastor’s house burned, and many food and construction supplies destroyed.  The congregation used to get their water from their neighbors and split the cost of electricity with them. Now, though, they’ve found the neighbors to be much less neighborly.  They’re now getting the cold shoulder because neighbors are worried about becoming targets themselves for helping Christians.  But the church is persevering, making plans for how to re-engage the community and re-establish their worship space. 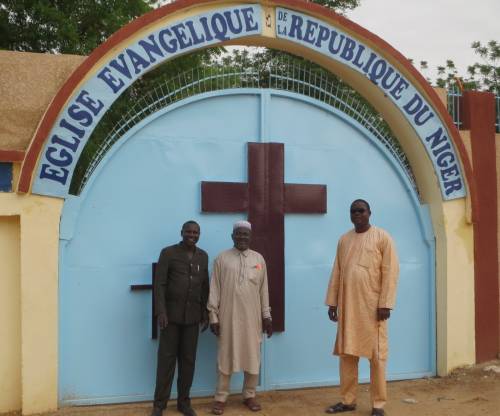 The president of the EERN, the pastor from Zinder, and another church leader stand in front of the new church gate

Donations from PC(USA) churches and individuals helped the congregation begin to reconstruct the church in November.  These contributions will help to provide a water source for drinking and for making cement blocks, and to establish a private line for electricity.  The church decided to use some of these relief funds to purchase a grinding machine as a way to re-engage the community.  Everyone in the community has to grind millet for their staple dishes either by pounding it into flour or by finding the few places like this that operate a grinding machine.  So not only will this start a small business for the church to help it pay for its water and electricity, but it also gives the neighbors a reason to come visit the church and restart relationships, seeing the church as a place that is providing something positive.

Another aspect of Mirriah’s rebuilding story came unexpectedly from an old man who spent most of our conversation with the church leaders sitting quietly on the edge of the circle.  In the 1990s he went to Nigeria to look for work.  Through relationships there he came to faith in Jesus, and then came back home to find his wives and family rejecting him for it.  But still he continued to grow in faith and became an evangelist in a neighboring town, where he started this church.  Eventually the church became an EERN congregation and the district sent them a new pastor.  Now in his 70s, this man continues to share the Good News of Jesus in the area while he lives in a small mudbrick room in the corner of the church property.  His hope is also to be a part of his church’s rebuilding by restarting his local Christian radio program, which had been dropped by the radio station because of fears after the riots and lack of finances.  But as several of the members had come to faith through it, the church feels it’s another important part of getting back to directly reaching out to their community. 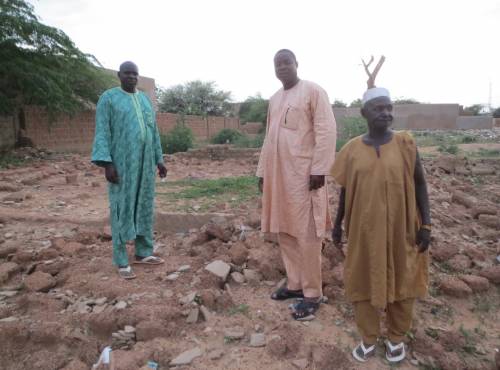 The new pastor, a national church leader, and the old pastor stand on the rubble of the Mirriah church

Our family is grateful for God’s abundant provision for us, especially when we see the difficulties of the Christians around us.  We feel privileged to accompany them in this time when there is so much potential for reaching out and rebuilding relationships that share the wholeness Christ brings to individuals and communities.  Amid our joy and learning, it’s still a struggle for us to be renegotiating the cross-cultural differences of living with the family of our guard as we approach the dry season and figuring out how to share scarce water between two families.  But we’re continuing to put together more language capacity and have had several family dinners when even our children were making sentences with vocabulary they’re learning.  We praise God for your support and prayers for our family, work, and colleagues.

We invite you to continue in this ministry with us, through your prayers and financial commitment to our sending and support, without which we could not do this work.  We also invite you to specifically be a part of the expanding outreach the EERN is undertaking as they seek to place an evangelist and church presence in 52 new places in the next five years.  An initial way you can help is through supporting the rickshaw taxi business they’re starting to provide jobs for youth and ongoing income to buy property on which new evangelists can live.  We mentioned this in past letters, but now they’re hoping to start the New Year with five taxis.  Each costs $2,500 to get on the road but can each generate $10-20 of profit a day.  To donate to the start-up costs you can send your contributions to Presbyterian Church (U.S.A.), P.O. Box 643700, Pittsburgh, PA, 15264-3700, and include a memo: Designated for EERN, E051746 “Niger Rickshaw Project.”

Thanks for being part of this relationship with our EERN partners as they rebuild houses of worship, rebuild relationships with communities, and build further on their opportunities to give glory to God while sharing the Good News of Jesus’ love.