Congregations: Give toD506665 for Choon and Yen Hee Lim’s sending and support

The 130th Anniversary of the Korea Mission was celebrated in April 2015. Horace G. Underwood, a Presbyterian mission worker, brought the Good News to Korea on April 5, 1885, on Easter. The Good News came through Incheon, and his prayer was heard in words something like these: “I arrived here on Easter morning. On this morning the Easter Lord who was raised from the death of the prison iron bars, which were destroyed, will destroy the Korean people’s bondage of iron chains so that they can gain freedom as God’s children.”

August 15, 1945, Korea gained freedom from Japan’s bondage of 36 years. This year Korean people celebrate the 70th anniversary of Liberation (Independence) Day of Korea. Seventy years ago Korea received special grace from God through the UN’s (especially the U.S.A.’s) help. So Korean people can never forget the U.S.’s mission work for the Korean peninsula and the freedom given to them. But there is still undone work: the reunification of the divided Korean peninsula.

For he himself is our peace, who has made the two one and has destroyed the barrier, the dividing wall of hostility, by abolishing in his flesh the law with its commandments and regulations. His purpose was to create in himself one new man out of the two, thus making peace, and in this one body to reconcile both of them to God through the cross, by which he put to death their hostility. He came and preached peace to you who were far away and peace to those who were near. For through him we both have access to the Father by one Spirit (Ephesians 2:14-18). 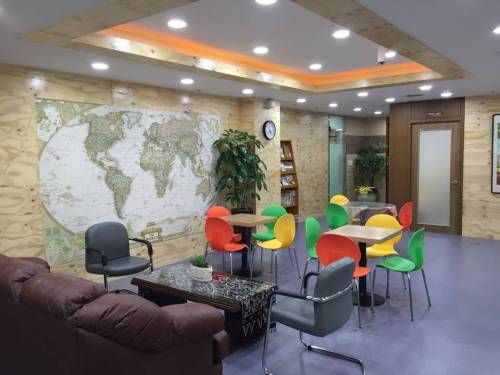 I am a Korean-American, and part of my ministry as Presbyterian World Mission’s regional liaison for East Asia is working on reconciliation and peace for East Asia, especially the divided Korea. I try to reconcile both North and South Korea through prayers, visiting North Korea, sending humanitarian aids, and educating youth and leaders of South Koreans for reconciliation and peace through forums and a reunification school. I go to North Korea two or three times a year to support the Korean Christian Federation (KCF), especially their bakery factory and their Chilgol Church, Pyongyang Disabled Children, Rason T.B. sanatorium, Pyongyang University of Science and Technology (PUST), etc. My major effort to support them is to keep the peace channel open as a bridge-builder.

Last year in November we moved our Korea Mission Office to the Christian Ecumenical Building in Seoul. We expanded our office to include a training and meeting room, the PR (Peace & Reconciliation) Network Café, and office space. We have a monthly forum on peace and reconciliation and a reunification school twice a year in the room. We have had a PR forum four times already, and each has been very well attended. During the summertime we plan to do a two-nights, three-days Peace Camp for college and seminary students.
On April 15 we had “Peace Talk Show” in the meeting room. Each month we have invited and listened to a speaker and then discussed the subject together. Our steering committee for the forum suggested we should try a different method next month. Rev. Lee, Moon-sook suggested the title “Peace Talk Show.” We didn’t know how it would go, but we all supported the idea and we tried it for the first time. Since it was a new method, we decided to select candidates from our steering committee. 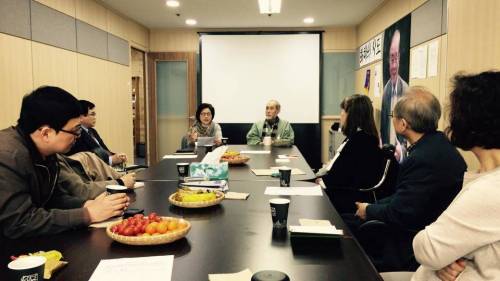 Rev. Lee was the emcee and Rev. Cho, Hun-chung, a former PC(USA) pastor, was the invited guest. Rev. Lee spoke about Rev. Cho’s personal history and experiences, which revealed untold stories: his background (his grandfather supported the Japanese government during Japan’s occupation of Korea and he apologized to us for that); his military duty in the Korean Army (he served at the DMZ and his friend committed suicide during his service; he himself asked why we fought each other since we were/are the same family); his life in U.S.A. (he met Rev. Dr. Rhee, Syngman, in 1980 in New York while he was Union Seminary and he worked with Rev. Rhee for North Korea and Korean people in the U.S.). His story moved and touched our hearts, and we cried several times. Especially when Rev. Cho shared with us about Rev. Rhee’s visiting North Korea in 1978 to meet his four sisters. Rev. Rhee’s father died during Japan’s aggression in Pyongyang (his father’s picture is in Korean church history as a martyr pastor).
Since 2015 is a significant year, please remember and pray for the 70th anniversary year of the end of World War II, the Japanese occupation of Korea, and the beginning of the Cold War dividing North and South Korea, and the 130th anniversary of the sending of our first missionary to Korea.
Again, I personally thank you for sending missionaries to Korea until now, because I am one of the Christians who became a PC(USA) missionary—in 1991—and continue to spread the Good News of Jesus Christ to North and South Korea now. As we face the biggest financial challenge in Presbyterian World Mission’s history, your financial support and prayers are greatly appreciated.

Together in mission,
Yen Hee and Choon Lim