Register today for the June 23 (2pm EDT) online Matthew 25 event that will look at hunger and food insecurities.
Make A Donation Click Here >
Home › What We Do › Where We Work › Co-workers › Light Dawning

During the fall of 2016 I’ve had the privilege of taking continuing education classes at the Near East School of Theology (NEST) in Beirut, Lebanon.  The classes are technically part the NEST’s Sabbatical Program made available to pastors and other church leaders from Europe and the United States every other fall semester.  Along with regular NEST students, we are studying the Contemporary Eastern Church and Introduction to Islam.  The Pastor’s Group also benefited from weekly seminars on a variety of relevant topics facilitated by both Christian and Muslim religious leaders ranging from “Women’s Voices in Lebanese and Middle Eastern Islam” to “Divine Hospitality:  Theology of the Other in Christianity and Islam” to “The Lebanese Political and Ecclesiastical Scene.”  Included has been the opportunity to visit with various church ministries carried out by the Middle East Council of Churches, the Armenian Union of Evangelical Churches, the National Evangelical Synod of Syria and Lebanon and others.

Visits to both Christian and Muslim worship services and a Sunni Islamic Court have been especially enriching and enlightening. 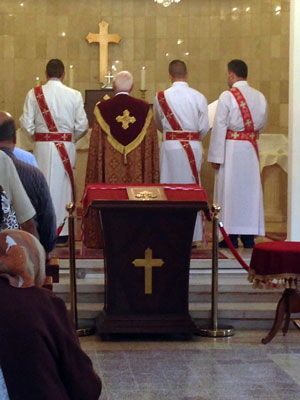 In late September, while with a visiting PCUSA Delegation, I spoke with Assyrian Christian Iraqi families living as refugees in Lebanon—13 families making up the nearly two million refugees that Lebanon has received since 2011. All of these families owned businesses in their Nineveh Plain communities before ISIS overtook their towns in July 2014.  All of their children were in quality schools before they were uprooted, moving four different times before finally finding haven in this southern Lebanese town.  One father shared that his extended family is now scattered to five different countries—a once closely knit community torn apart by violence over which they have no control.  Instead of going to his business that is now gone, this father wonders every day whether or not he’ll be able to find day labor to provide for his family—labor that is fiercely competed for between both Iraqi and Syrian refugees, but also impoverished Lebanese citizens.

But it was as we worshipped on a Sunday morning in early October with the Ancient Assyrian Church of the East that I could begin to understand at an even deeper level the terrible cost of this community being torn apart—first through the impact of the 2003 US-led invasion of Iraq, and then through the advance of ISIS through Mosul and the Nineveh Plain.  This is a community of faith that emphasizes grace, welcome and an open Communion Table.  Throughout the service, members shared the peace of Christ with one another and with visitors.

The Church of the East traces its commitment to monotheism back to the biblical reference of Jonah’s reluctant assignment to the ancient Assyrian city of Nineveh (near today’s Mosul, Iraq), and its Christian beginnings back to early Jewish communities living in this same area since the Babylonian captivity of 600BC.  These communities were receptive to the early Christian message as the Apostle Thomas (and others) traveled along the old trade routes to India and beyond.

The Assyrian Church began to take on a more organizational structure following the Council of 410, where they were given official recognition by the Roman Empire’s Christian community.  However, they are the only living Eastern Church that took substantial shape outside of the direct influence of the Greco-Roman Empire and culture.  Under the third Islamic Caliphate—the Abbisid Dynasty (750-1258CE)—the Assyrian Church was favored because of their heavy emphasis on the humanity of Jesus and because they did not use icons in worship.  And so the church grew to over 80 million adherents throughout the areas we would know today as Iraq, Iran, India, Thailand, Mongolia, Tibet, and into China.  Their reach lasted until the Mongol Invasions of the 13th Century.  Until 2003, they still had substantial communities in Iraq (and there is still an Assyrian Church presence in Iran and Syria).

Now, this community that has so long been tied to their ancient lands, extending Christ’s grace and welcome to those around them, understanding their faith not in abstract terminology, but through practices that bring the community together, now this community is being scattered to the four winds, seeking refuge in countries where they are welcomed, not knowing whether the current efforts to re-take Mosul and the Nineveh plain will ever result in their ability to return home.  Today, their numbers in the region are estimated to be around 100,000.

As I sit with the story of this faithful church community, I listen with different ears to Isaiah’s great prophecy found in Isaiah 9:2-7.  Most of these words we sing as part of the Handel’s powerful “Messiah” every Christmas:

“The people walking in darkness have seen a great light; on those living in the land of deep darkness a light has dawned…Every warrior’s boot used in battle and every garment rolled in blood will be destined for burning, will be fuel for the fire.  For to us a child is born, to us a son is given, and the government will be on his shoulders.  And he will be called Wonderful Counselor, Mighty God, Everlasting Father, Prince of Peace.  Of the greatness of his government and peace there will be no end.  He will reign on David’s throne and over his kingdom, establishing and upholding it with justice and righteousness from that time on and forever.  The zeal of the Lord Almighty will accomplish this.”

But there is one line in there that doesn’t make Handel’s oratorio—it’s verse 5:  “Every warrior’s boot used in battle and every garment rolled in blood will be destined for burning, will be fuel for the fire. “   These words come almost immediately after the promise of light dawning on a people living in great darkness, and immediately before the powerful proclamation of how this light shall be known—Wonderful Counselor, Mighty God, Everlasting Father, Prince of Peace.”  This promise of One coming who will bring a governance of unending peace is given in the context of war and great loss of life.

We continue to give thanks for the gift of YOU in our lives.  What a privilege it is for us to serve alongside of Christ’s church in the Middle East and to do so in partnership with you.  Thank you for your gifts of prayer, encouraging emails, financial support, and presence through visits and shared ministry.  We look forward to continuing this work with you in 2017.  We’ll be traveling and speaking in the States July-September 2017.  Please let us know if you’d be interested in having us come to visit with your church or presbytery.