I wish I had a picture of the scene: Bright orange ping pong balls. A meandering single-file line. Hands, voices, and over-the-shoulder glances endeavoring to safely deliver each ball from the first basket to the second, from one end of the line to the other, backwards. A hushed, focused rhythm. But that’s not how things started.

The eager, self-nominated leader at first misjudged the height of the ceiling, and as he tossed the balls overhead, they ricocheted in unexpected directions. Once he corrected the trajectory, he started moving quickly — too quickly — tossing first one ball, then another, while the person behind him was still working on passing the previous one along. The people at the back of the line grew restless as ball after ball fell to the tiled floor with a hollow pong, pong, pong, none making it past the first four people in the line of 17.

Eventually, from the chorus of competing voices calling out to him, the leader heard some advice: take your time, make sure the person behind you is ready before you send that ball.

From that moment on, things began to flow. Down the line, members with less mobility were positioned close enough together to pass the ball without it dropping. The tension and noise in the air dissipated, and calm voices were easily heard: Ready? Just a moment. OK, now I’m ready!

Only about half of the ping pong balls made it to the final basket, but the failures as well as the successes provided for a lively discussion. “What did you notice? How did you feel?” I asked the class. It was the first session, and their responses pointed to the primary topics we would cover in a course I taught during the second semester of 2017 with my Colombian colleague Rev. Jairo Barriga. “We had to adjust our tactics once things got underway,” observed one person, “and we learned what worked. We might have been more successful if we’d done more planning at the start.” Another commented, “Communication was the key to avoiding mistakes.” And a brave soul confessed, “It was hard to know that I couldn’t control the entire process; I just had to trust others to do their part and focus on my own.” 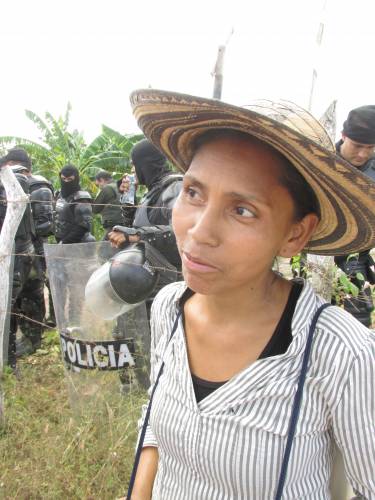 Norma, secretary of the El Tamarindo campesino association, with anti-riot police standing by to enforce the eviction in 2015.

The students were all campesino farmers who used to live and work the land in El Tamarindo, a farm just outside of Barranquilla. The Presbyterian Church of Colombia has accompanied them since 2012, joining in their struggle to have their rights and dignity respected in the face of a large and politically well-connected company which claimed ownership of the land and heartlessly evicted them just three days before Christmas 2015. We designed the course, “Building healthy communities,” for them, and focused on communication, community dynamics, conflict mediation, and group decision-making processes, because these campesinos are on their way to new land and new opportunities to continue working together to build a more hopeful future. 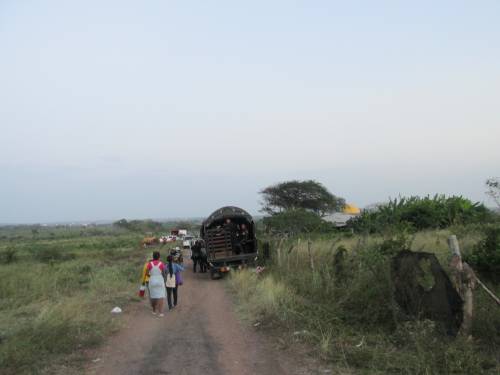 Campesina women walk through the farmland they are being forced to leave in El Tamarindo, December 2015.

Some of them will be living and working on a small farm obtained by the local presbytery. Others will be moving to a larger farm being offered by the Colombian government as restitution for the displaced campesinos who are registered victims of the armed conflict. After years of uncertainty, it looks like 2018 will be a year of new steps and new opportunities for these campesinos, and I am grateful to have the opportunity to walk alongside them on the journey.

During one class, we reflected on these verses from Ecclesiastes (4:9-10): “Two are better than one because they have a good return for their hard work. If either should fall, one can pick up the other. But how miserable are those who fall and don’t have a companion to help them up!” Two strengths of this particular group of campesinos are their unity and organization. They make each other crazy sometimes, but they also keep each other company, and help each other stay focused on the goals they share. Together they have faced the hazards and injustices of forced displacement and inefficient government agencies, but because they stuck together, they were able to continue insisting on their civil and human rights. And now they are looking toward a new and hopeful future, thanks be to God!

As 2017 draws to a close, I give thanks that I, too, am surrounded by a company of faithful friends and supporters who encourage and accompany me along the way. Thank you for this opportunity to serve God in this place, at this time. If you have not already made a commitment to this work, please prayerfully consider joining with me and our partners in ministry in being a part of what God is doing in Colombia.

As we prepare for the new year, please know that you are in my prayers, as I trust I am in yours. We may not know what the future holds, but we trust in Christ’s presence. The light still shines in the darkness, and the darkness will not overcome it! May the light of Christ be rekindled in each of our hearts, and move us to share it near and far.