Make A Donation Click Here >
Home › What We Do › Where We Work › Co-workers › Joys, Sorrows and Challenges

Individuals:  Give online to E200412 for Larry and Inge Sthreshley’s sending and support

Congregations: Give to D505045 for Larry and Inge Sthreshley’s sending and support

Larry and I send you our greetings from Kinshasa and wish all of you happy holidays with your loved ones and friends as 2015 draws to a close. 2015 has been a year of joys, sorrows, and many challenges, but we have much to be thankful for.

January started off with a bang—quite literally.  The second week of January there was civil unrest in Kinshasa with violent demonstrations against the government related to proposed changes in the constitution for presidential term limits. The subsequent crackdown on these demonstrations had us and our colleagues working from home for several days.  We noted that that we had become a bit complacent in our “crisis preparations” after a few years of relative calm in Kinshasa. And when the Internet and phone were cut, we realized just how dependent we were on these technologies these days. 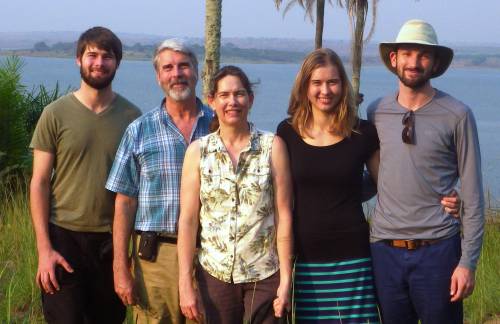 In early Spring I observed that my father, Carroll French, could no longer pick up the phone in his room at the nursing home when I called and he was increasingly confused. I sensed his days with us were drawing to a close and I needed to go see him.  In late April of this year I was able to spend 10 precious days in Nebraska visiting with my father and sister.  I was able to “play” the piano for my father one Sunday and some favorite hymns such as “Great is Thy Faithfulness.”  I haven’t played the piano in years, but he enjoyed it.  I told him he was getting some of his money back on all those piano lessons, and we both laughed.

I returned to Congo in early May just in time to welcome 11 summer interns who came to work with IMA World Health for three months.  We really enjoyed the energy they brought with them and helping them in their research pursuits.

It was an especially great joy to have both our children visit over summer!  Our son, Michael, spent a couple weeks with us in Kinshasa on both ends of doing an internship in the Kasai province with a local group called PRODEK.  Our daughter, Lisa, and her boyfriend, Hugh Green, came for two weeks in July.  In those two weeks we were able to get in a trip to Zongo Falls, a day on the Congo River, and a typical Sthreshley family “working vacation” to the Kasai with a night at Lake Munkamba. Hugh was a great trooper as he “navigated” the Congo with us.  Lisa now lives in Atlanta, Ga., and works for Emory School of Medicine on several health-related projects.  Michael is finishing up his senior year at the University of Hawaii at Hilo.

The end of the September Larry and I returned to the States to attend the Congo Mission Network and meetings at IMA headquarters and were able to spend a little time in Virginia with Larry’s brother and his mother, who is 93. We also did a two-and-a-half-week mini itineration speaking in churches.  It was very encouraging for us to meet with so many of you who are interested in Congo and to be able to share the joys and challenges of living and working here.  We were able to connect with 18 of our supporting churches and wish we could have done more. We hope to do another mini itineration next fall and meet with those of you with whom we were unable to connect this year. 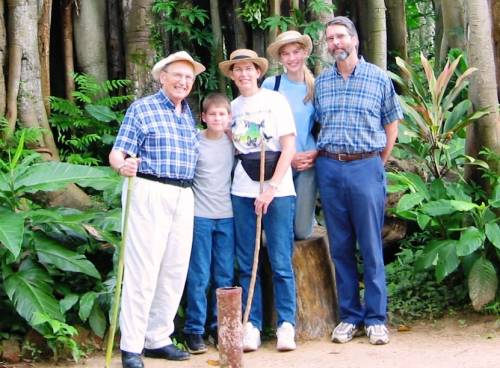 In the last week of our stateside trip I received word from my sister that my father’s health was declining rapidly.  I flew to Nebraska and was able to be with my father and siblings a little less than 24 hours before my father passed on October 8.  His departure from this world leaves a big hole in our hearts, but his spirit is now soaring with my mother’s and the angels in a place where there is no more pain and suffering.

Larry continues in his role as a PC(USA) missionary seconded to IMA World Health.  He is the IMA Country Director for Congo and Chief of Party of the ASSP project, which in English stands for access to primary health care.  This five-year project covers 52 health zones and delivers health care to approximately 9 million people.  It is financed by the British and Swedish governments. IMA also manages the USHINDI project in Eastern Congo, which addresses sexual and gender-based violence and also several other small health projects. I continue to work on the nutrition component of the ASSP project and still give oversight to the management of the Methodist Presbyterian Hostel/Guesthouse. Our work is often challenging but always rewarding and we have a great group of colleagues with whom to work.

It continues to be a privilege for Larry and me to serve in Congo on behalf of those who support us both financially and through prayer.  We are very grateful for your support and invite you to continue on this journey with us in the New Year.  I am reminded of the last prayer I heard my father say, which he started with “Father God, you have been good to us” and I can affirm that even in our sorrows and challenges this year, God has indeed been good to us.

For the Lord is good; his steadfast love endures forever, and his faithfulness to all generations  (Psalm 100:5).