Make A Donation Click Here >
Home › What We Do › Where We Work › Co-workers › Saved by a Banner?

A letter from Josh Heikkila serving as Regional Liaison for West Africa, based in Ghana

In the fall of 2012, while visiting the U.S., I collected quite a few gently used church banners from congregations in the Twin Cities Presbytery, which over the course of 2013 I distributed as gifts to congregations of our church partners in West Africa.  The banners ended up in Ghana, Togo, Nigeria, and Niger, I think in more than three dozen different congregations in all.  They proved to be a big hit.

As Regional Liaison for West Africa I help our denomination build and sustain church partnerships in the region.  I really like the banners because they are a small but significant way of expressing that partnership.  They serve as a visible reminder to our partners that we have brothers and sisters around the world who are thinking about us, praying for us, and looking for ways to help us, and who also learn from us as we live out our calling as disciples of Jesus Christ. 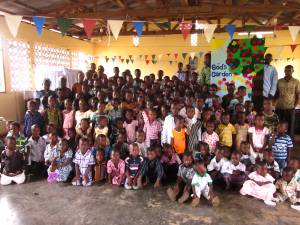 There is an interesting story about the banners that ended up in Niger that I want to share with you.

In January of this year some political tensions in Niger led extremist groups in that country to attack churches and Christian-owned businesses and homes.  In all it’s believed that more than 50 churches of various denominations were burned on Friday and Saturday, January 16 and 17, many of them in Niger’s capital, Niamey. It was a small faction that incited the violence, and in many places moderate Muslims who are neighbors and friends of the Christians and churches came out to defend them against the attacks. Although what happened is troubling and unfortunate, the fact that Muslims came out to protect their Christian neighbors is a sign of the good interfaith relations that have been built in Niger.

The PC(USA) partner in Niger, the Evangelical Church in the Republic of Niger (EERN), has been a leader in peacemaking and interfaith relations in the country. However, two of their churches in Niamey came under attack that weekend.  One was set ablaze and completely destroyed, while the other escaped mostly unscathed. Both of these congregations had banners hanging in them that came from the Twin Cities Presbytery.

I’m told that at the second congregation a mob of young men arrived on motorcycles to set the building on fire, but neighbors came out to defend the church.  The mob was insistent that the place needed to be burned, so a compromise was reached.  The mob pulled out the pews, the musical instruments, and the banner, and all of them were piled in the street, lit on fire, and destroyed.  In exchange for this symbolic action, the mob spared the church building.

I’m sure when our church women, children, and youth made these banners from pieces of felt, they figured they’d hang on a wall to enrich the life and faith of the congregation. While most banners eventually get put in a closet and forgotten, these ended up in West Africa.  I’m sure that no one ever imagined that one day they might actually help spare a church from persecution and destruction. But that is exactly what happened!  We’ll never know for sure, but maybe without that banner to light on fire, the church would have been burned to the ground instead.

One hymn I’ve always liked so much is “How Firm a Foundation,” and in particular, I like the way the hymn writer makes reference to Isaiah 43:

When through fiery trials your pathway shall lie,
My grace, all sufficient, shall be your supply;
The flame shall not hurt you; I only design
Your dross to consume and your gold to refine.

I find the last verse of the hymn especially relevant here:

The soul that on Jesus hath leaned for repose,
I will not, I will not desert to its foes.
That soul, though all hell should endeavor to shake,
I’ll never, no never, no never forsake. 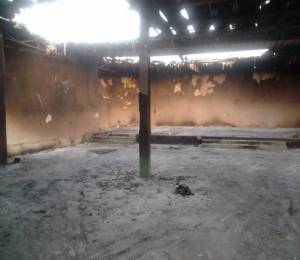 The inside of one of EERN’s burned churches in Niamey, Niger (photo credit: Issaka Moussa)

From our brothers and sisters in Niger, I can relay to you that it was not easy for them to make it through that difficult weekend.  As their churches, homes, and businesses burned, many felt overwhelmed by fear, and by a sense that those who had once been their neighbors were now their persecutors. In the midst of it all, some even felt abandoned by God.  But over time, as the church in Niger reflects on scripture, they are once again strengthened by their faith.  They know God is with them, and that even in a difficult place like Niger the church will survive and thrive.

I want to thank all of you for supporting me as the West Africa Regional Liaison—with prayers, letters, and financial resources.  This support helps us in the Presbyterian Church (U.S.A.) to walk alongside the Evangelical Church in the Republic of Niger more closely and together with them to be the disciples of Jesus Christ that God is calling us to be.   I also want to thank the congregations in the Twin Cities Presbytery who first gave the banners that went to Niger.

The church in Niger currently needs help rebuilding the churches and manses they lost that weekend. They need continued support for their work with development and poverty reduction, and with peacemaking activities.  If you would like to contribute, you may do so through the extra commitment opportunity E051746, at this link, https://www.presbyterianmission.org/donate/E051746/.