Share God’s love with our neighbors-in-need around the world through One Great Hour of Sharing.
Make A Donation Click Here >
Home › What We Do › Where We Work › Co-workers › With Whom Will We Stand?

In Santo Domingo, the capital of the Dominican Republic, there is a giant statue of Friar Antonio de Montesinos. He is depicted as calling out, hand raised beside his mouth to call to all who will listen. His text on a Sunday in Advent of 1511 was from Mark, “the voice of one calling in the wilderness,” and it was very appropriate for the message he was called to deliver to the gathered Spanish colonists. 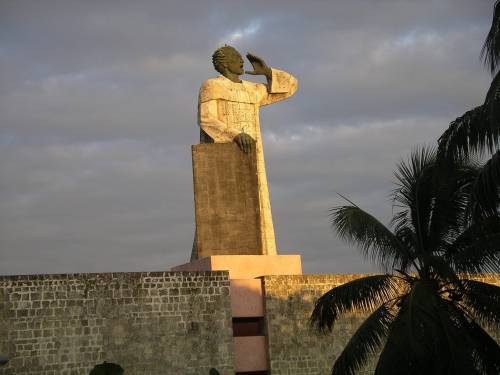 Statue of Antonio de Montesinos in Santo Domingo, calling the faithful to action

The Caribbean island of Hispaniola (now divided between the Dominican Republic and Haiti), was among Columbus’ first stops in his first voyage.  This was the site of the first encounter between Europeans and the indigenous peoples in this hemisphere, and it ended in the total decimation of the indigenous of Hispaniola and many other islands. This encounter between the indigenous and European Christians, sailing under the protection of the crown and the Church, is well known in the Caribbean and throughout Latin America as “the conquest under the cross and the sword.” [1] The importation of African slaves added to and deepened the tragedy.  The very soil and water of Hispaniola, of Cuba, of Jamaica and of countless other islands bear witness to this human tragedy. Every Caribbean schoolchild knows the story. Few North Americans or Europeans feel the deep contradictions inherent in this story as it is contextualized and “felt” in Latin America and the Caribbean.

But this active complicity with a cruel and violent political and social order was not the only current that ran through the Church at that time. For in these same lands Dominican priest Antonio de Montesinos—19 years after Columbus’ first landfall—preached his prophetic Advent sermon, denouncing the enslavement and cruelty imposed on the peoples of the Caribbean.  It was Montesinos’ sermon that convicted and galvanized Bartolomé de las Casas to give up his privilege as a Spanish landowner—and with it, the owning of people—and become the great protector of the indigenous people. Likewise de las Casas records the story of the Taino chief Hatuey who fled Hispaniola for Cuba and was burned at the stake for leading a rebellion of Tainos and enslaved Africans against the Spaniards.[2]

See, I am sending my messenger ahead of you, who will prepare your way; the voice of one crying out in the wilderness: “Prepare the way of the Lord, make his paths straight” (Mark 1:2-3).

Antonio de Montesinos, a Dominican friar, delivered a provocative sermon to Spanish
colonists gathered in a small church on the island of Hispaniola on the Sunday
before Christmas, 1511. He shocked and angered the congregation; in time, they succeeded
in having him sent back to Spain (Bartolomé de las Casas, in his History of the Indies).

So begins the history of Christian mission in the Western hemisphere.  We must ask ourselves, “How do we engage in ‘mission’ in this hemisphere—with our brothers and sisters of this Caribbean region—a place where the first ‘mission trip’ ended in genocide?” Last January a group of seminarians and young pastors from Louisville Presbyterian Seminary and from the Protestant Theological Seminary in Matanzas, Cuba, gathered together for an intensive course on the “doing” of mission in our separate and joint contexts. We began here, at this intersection of cultures and histories—a past that contained great darkness, but also great light. Together we struggled with the stories from this history as we sought to contextualize our present walk together as brothers and sisters in Christ and as churches that seek to be true partners in God’s mission to the world. 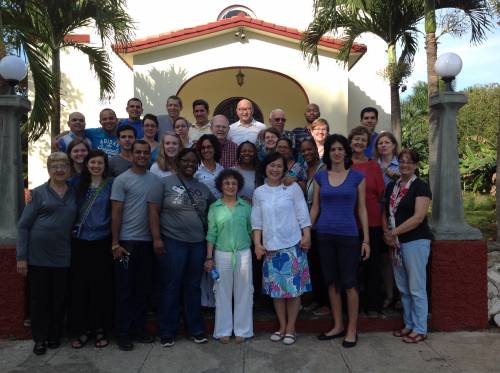 At Advent we are asked to “prepare the way of the Lord,” for the coming of the Christ child. In doing so, we must make choices. With whom will we stand when the majority is too often on the side of injustice? Will we choose, like Montesinos, to trouble the waters, to be a voice crying in the wilderness and to accept the consequences? Montesinos was sent back to Spain, for the colonists would have nothing of his message.  Will we choose like de las Casas, who spent his life speaking on behalf of the indigenous of this hemisphere, from Hispaniola to Cuba to Mexico to Peru? These two chose to ally themselves with those who had been dehumanized, enslaved, oppressed and killed. And it was at a high personal cost.

So many in our world today are in similar straits, both in our own communities and in those around the world.  How may we “make straight the way of the Lord” in these circumstances? That is the task of Advent, as we await the coming of the Prince of Peace. We must choose, so that we, following the example of Jesus, might proclaim the good news of God and the coming-near of God’s reign.

May we choose wisely, faithfully—despite the cost that such discipleship entails.

A heartfelt “thank you,” mil gracias, to all of you who remember me in prayer and through finances support this ministry with our church partners in the Caribbean region. If you and your congregation are not already supporting a PC(USA) mission co-worker, won’t you be part of this ministry? I recently was informed that my own support stands at 63 percent funded for this year. Won’t you help me get to 100 percent? I would so appreciate your help.

Many blessings on each of you as we await the coming of the Prince of Peace.