Share God’s love with our neighbors-in-need around the world through One Great Hour of Sharing.
Make A Donation Click Here >
Home › What We Do › Where We Work › Co-workers › Agents of Reconciliation

“I still am not so sure about eternal life,” said the man named Juany, “but I do know that this church saved my life!” I was listening to the stories of the five or six people gathered in a church sanctuary in Cuba. It was a “newcomers” class for people who had been attending the Presbyterian-Reformed church in that town, exploring Christian faith. All were adults and, unlike many such classes in our own congregations, these people had not grown up hearing Bible stories. They had not spent a lifetime attending Sunday School. They had not celebrated Christmas or Easter. They knew Jesus only as a historical figure, if at all.  The pastor asked each person to introduce themselves—for my benefit—and to explain what had brought them to this moment of searching.

In God,we are one people with both a hope
and a future. —Cesar Moya.

Juany’s story was perhaps the most dramatic of the group because Juany is an alcoholic and his life was a mess. His wife had left him, taking the children with her. He had trouble at work. Every aspect of his life was falling apart. He was desperate and that desperation had led him to a meeting of Alcoholics Anonymous held in the Presbyterian-Reformed church of his hometown in Cuba. The church, seeing the effects alcohol was having on the people of their community, had begun the AA meetings as a community service. Juany was one of many adults and young people who first crossed the church threshold in search of help and hope.  And Juany was not disappointed. He struggled with his addiction in the company of others, was supported through times of falling back into old ways, was encouraged through the stories of others. And, over time, he began to put the pieces of his life back together. It happened here, in this church building that he had passed thousands of times in his life without ever entering. Juany experienced “good news” in this place and, little by little, arrived at new questions—What compelled the people of this congregation to reach out to others? Who was this Jesus, whose life and death and resurrection had special meaning to this group of people?  Questions about his own life, his own relationship to God. 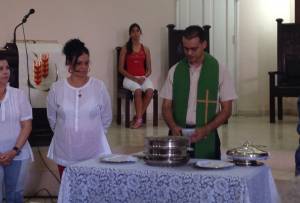 Rev. Marlon Irrarragorry, of the Presbyterian-Reformed Church in Cuba, celebrates The Lord’s Supper in his congregation

Reconciliation takes many forms: being reconciled to oneself; being reconciled and restored to family and community; being reconciled to God. It is usually a process that is “…the beginning of a new life, [one] that confronts the past and points toward the future. It is a new creation that gives evidence to the presence of God.”  In many different ways the Presbyterian-Reformed Church in Cuba has been and continues to be a positive force for reconciliation within Cuban society and between Cuba and the U.S.

The Presbyterian-Reformed Church in Cuba regularly selects a biblical text and a theme to guide the church’s reflection. This year and next the text is Isaiah 58:9-12 and the theme is “A church that practices service and reconciliation.”  Their commitment is to be faithful to their calling as Christians in their own country, to serve and to reconcile within their society and, with us, between our two countries and peoples. It is our calling as well, one given by the same Lord, the same Spirit, through the same baptism and celebrated around the same table of Communion. That is our opportunity in this new moment of openness and change within Cuban society and between our two countries. It is one that we can embrace joyfully, as we have for over 50 years, accompanying the church in Cuba and our own people in a ministry of reconciliation that can bring new life to both our peoples. For, in God, we are one people with both a hope and a future[DS1].  May we remember it.  May we believe it.  May we live it. 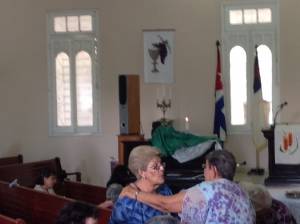 Sharing the Peace of Christ

As we celebrate World Communion Sunday and this Peacemaking season in the PC(USA), won’t you join me in prayer for the Presbyterian-Reformed Church in Cuba, for their ministry with their own people, for our joint ministry and witness as “reconcilers” between our two peoples?  The Table is set. Come join the banquet!

Give generously to support our ministry together.  Pray fervently.  Be agents of reconciliation wherever God places you.  May the Prince of Peace show us the way.