A Letter from Jeremy and Luta Garbat-Welch, serving in Malawi

We have said many times that life in Malawi moves at a slower pace than life in the U.S. This is seen in many different aspects of life: Sometimes it’s an expression of people’s attitudes towards time, and the fact that a person might not show up when they said they would, but rather some hours (or days) afterward. Sometimes it is reflected in how people talk: They call on the phone to say, “I am here,ˮ when really they are still five minutes away; Or they call to say, “I am coming just now,ˮ which I usually think means, “I’m almost there,ˮ but truly means, “any second now I will get dressed and head out.ˮ Sometimes “life moves at a slower paceˮ means that our plans for meetings and travel get interrupted or changed by the various other things that cut into people’s lives, such as funerals, last-minute wedding notifications, and meetings with other people higher up. 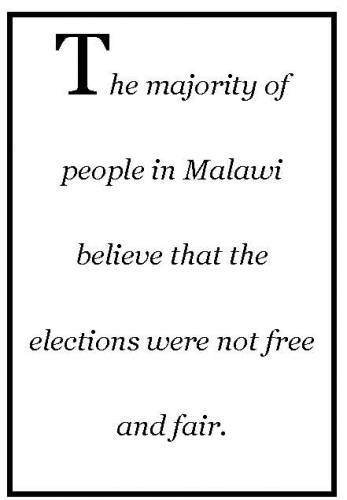 This past year we have encountered a new event that interrupts schedules and slows things down: political demonstrations. Since the Presidential elections half a year ago, the majority of people in Malawi believe that the elections were not free and fair. Particularly, they have targeted the leader of the Malawi Electoral Commission (MEC), asking that she stand down. Every few weeks, there has been a demonstration to call for her resignation. This means that on dozens of occasions, businesses and schools across the major cities, especially here in Lilongwe, have closed down. At the same time, thousands of people march from one part of town to another to demand that the MEC head resign.

The courts received an official request to nullify the elections, held numerous hearings to see evidence and to speak to witnesses, and finally, after eight months of hearings and deliberations, gave their verdict last week: there were indeed many irregularities! They have declared the election null and void and have given a deadline by which the re-election must be held. This triggered a celebration for many, but not all. More demonstrations are planned, demanding that the MEC Commissioner step down now that it is clear there were significant irregularities. There are also planned demonstrations by the party in power, saying that this is not justice and that the court ruling needs to be appealed. Recently, various looters have been taking advantage of these protests and have spread out into the neighborhoods near the planned demonstration routes, stealing and causing property destruction. The last few times this occurred, the edges of the neighborhood we live in were targeted.

People have become more and more tense and cautious whenever a new protest is announced, worried about what might happen this time. The Clinical Pastoral Education (CPE) program at Kamuzu Central Hospital (KCH) asked me to teach a couple of lessons to their new batch of students. I taught one week on Listening and the next on Feelings. The first week took place just before the courts announced their decision. I led an exercise where I mentioned a topic or event and then asked the students to name three feelings that they felt when I named the topic. One topic was politics. Words like worry, fear, disappointment, frustration, and anger were expressed. The second lesson was the week after the court announced that the elections were null and void. I repeated the exercise, and this time “politics ˮ sparked words like hope, happy, excited, as well as nervous and worried. For some, things are more hopeful now that the courts appear to be just and resistant to bribery and manipulation. But for most, the situation is still tense and uncertain.

As we plan to return to the U.S. for our Interpretation Assignment and work to get a few major things done before we go, it is hard to be gracious at interruptions to our already busy schedule. It is easy for me to become frustrated by all of this and see it merely as a pointless interruption in a smooth routine. We do not live in the exclusive part of town where people are protected by ten-foot fences and double lines of razor wire; we live near one of the major roundabouts that nearly all of the protests have passed through. We have to decide, just like the parents of our children’s classmates, whether or not to send the boys to school on a protest day. Just like everyone else, we need to adjust our schedules and our lives to be flexible with the unknown changes that every day can bring. 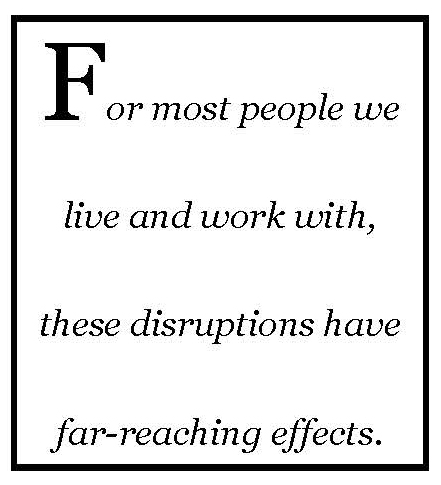 As we talk with neighbors and friends who see their country struggling with corruption, poverty, and anger directed at the leaders, it’s a reminder of my continued privilege. These nationwide political demonstrations and other such events mess up my day and put me behind schedule, but I have a safety net provided by work, a steady job and income, reserves in the bank, stellar health insurance, and the knowledge that I have family members more stable than myself that I can call on in an emergency. The reality for most of the people we live and work with is that these disruptions have far-reaching effects. A hard rain that wipes out the ancient roof on their house; a pest that eats half the harvest; the boss saying that since electricity is out so much, they are going to stop paying people full-time since there is no way to work anyhow; not enough oxygen machines in the hospital for all who need them; school fees suddenly getting bumped up 25% and making a good education hard to provide; or someone stealing their bike and making it much more difficult to get to work. I am indeed blessed that relatively few things interrupt my life. I am blessed that I even have a work meeting to worry about rescheduling.

This is one of the many blessings that comes from living and working alongside our mission partners. The missiology of the PC(USA) is one of mutuality and partnership. We are sent to work as one of many on the projects and ministries our partners hold dear. We are called to live with them, to learn from them and minister alongside them. At times this is difficult as we struggle with the privilege that we unavoidably bring with us. After all, I know with every demonstration that if things really get rough, we will be evacuated; this is not a benefit that those we minister with can share. But we are grateful for this missiology that compels us to learn from the lived experience of being with a different people in a different place than the ones we were trained in.

And so in this busy season of uncertainty, I pray that we can all find the peace and grace we need to take a deep breath, and remember that we are still blessed and that God is still providing, even when our day takes a sudden sharp turn into temporary chaos. Please pray for the nation of Malawi as its citizens and leaders continue to work through this election process. We will soon be packing up for six months in the U.S., a busy time of visiting churches, friends and family. Please pray for health in this busy season and safety in our travels. We look forward to seeing many of you this summer, to be able to share in person more stories about the ministries we partner alongside. As always, thank you for your prayers, emails, letters, and financial gifts. They are what makes this work possible.