Christmas Joy Offering – Supporting our leaders: past, present and future.
Make A Donation Click Here >
Home › What We Do › Where We Work › Co-workers › Honoring Unsung Heroes

For even the Son of Man did not come to be served, but to serve, and to give his life as a ransom for many. (Mark 10:45)

Maria Ikan was a pious churchgoer of the Bailen Evangelical Church that was planted by early Presbyterian mission and eventually evolved into the United Church of Christ in the Philippines (UCCP) Bailen. She was happy in her faith practice as it was until a calling came in the form of a dream when she was 30. In her dream, she saw a brightly illuminated golden ball in the sky, and as she stared at it, the ball broke open, revealing Jesus sitting at the center and looking at the fields below where sheep were grazing. And Jesus said, “Do you see those sheep? They are like people yearning for food that comes from the word of God.” As she heard this message, she exclaimed, “I am here Lord.”

From that moment on, for the next 60 years, Pastor Maria Ikan tirelessly served God in various places, and was renowned for her efforts in sharing God’s living word in the provinces of Cavite and Batangas, south of Manila. She started a children’s Sunday School program and was a beloved teacher of children and youth. She traversed two rivers and walked for miles to reach remote areas so that they could study the Bible. She was assigned to churches that were dying or facing major challenges, and there she would stay with member families and help them grow in faith and in numbers.

Even at 65, when she formally retired, she was assigned to an outreach ministry in a remote area of Guyong Guyong, which was not accessible by vehicle. Pastor Maria patiently walked to the area, and neither the heat of the tropical sun, nor torrential rains, nor flooding rivers stopped her from fulfilling her mission calling.

Pastor Maria Ikan was one of the eight Unsung Heroes that the UCCP honored during its quadrennial General Assembly held May 24, 2018. This year was a bigger celebration than usual, as it coincided with the UCCP’s 70th Founding Anniversary.

The eight servant leaders were nominated by churches for having demonstrated exemplary service to God’s ministries with heartfelt devotion and selflessness, for having gone beyond the call of duty, and doing so without pomp and public attention. Along with seven other distinguished church workers, Pastor Maria Ikan was honored as an UCCP Unsung Hero of church ministry service. 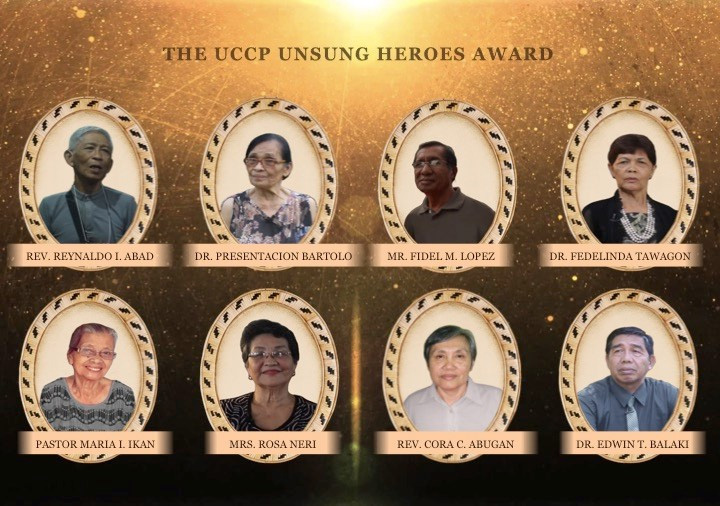 Together with our team at the Youth Advocates Through Theater Arts (YATTA) that serves as a creative voice for churches and communities in the Philippines, the Young Adult Volunteers were tasked to organize and manage the program and celebration for the UCCP Unsung Heroes Awards Night. It was a spirit-filled evening, made more inspiring by the testimonies of people touched by the faithful work of the eight.

Pastor Maria Ikan passed away in April, three days after a team came to her home to share the news of her recognition by the church and to interview her family and co-workers about her amazing work through the years. Though she was already weak at this time, she wanted to come to the awards night in May. Her daughter, Dorcas (a diaconal minister), and son, Jezer (also a pastor), received the recognition on her behalf from Bishop Jaime Moriles during the awards night. In tears, her son reminisced that his mother was so dedicated, that even at ninety, she was ready to serve God: “We all had to tell her that she has done so much and to encourage her to rest.”

In her citation, the words were aptly crafted in this way: “The UCCP honors Pastor Maria Ikan for her exemplary service as a pioneering missionary in the provinces of Cavite and Batangas; for inspiring others that there is no river too deep to cross and no mountain too high to climb; for the sharing of the Good News of Christ’s love for all for her tireless evangelism that helped in the formation of several local congregations; for inspiring others and serving as a model for many church workers and lay people all over the South Luzon Jurisdiction.”

Thank you, God, for the life of Pastor Ikan, lived in humble service and for your glory. And we thank God for all of you who continue to hold us in your prayers. Your steadfast support, financial and otherwise, allows us to strengthen and celebrate the life and works of church workers such as Pastor Ikan.