A letter from Tom Harvey serving in England

Individuals: Give online to E200358 for Tom and Judy Harvey’s sending and support

Congregations: Give to D506421 for Tom and Judy Harvey’s sending and support

First, we want to thank you for your faithful support of us as your mission co-workers. Through our continuing work at the Oxford Centre for Mission Studies (OCMS), we are blessed to serve within the rich mission tradition of faithfulness to Christ and his Kingdom. That service continues, but it does now face major challenges. Now more than ever we need your prayers and support.

In April we received word that our position would no longer be funded at current levels due to the severe shortfall in mission funding. Due to the importance of our work at OCMS the PC(USA) is retaining us as mission specialists, but no longer as mission co-workers with Presbyterian World Mission. What this means is that we personally and OCMS generally are now responsible to raise the full salary support for the position of academic dean of OCMS, the position that Tom fills. 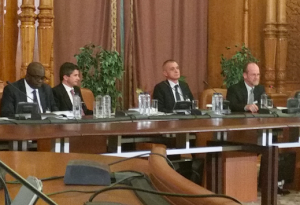 As you know, OCMS is not an ordinary academic institution.  Our students are church leaders, evangelists, missionaries, ministers, and development workers from nearly 40 countries around the globe. Most come from poor nations in Asia, Africa, and Latin America, and nearly all of our students are dependent on OCMS generous bursaries to meet their fees.  From its founding OCMS has relied upon the generous support of churches and mission agencies to continue its work. Presbyterian World Mission has partnered with OCMS by underwriting the position of academic dean through the generous gifts of Presbyterians like you.  For that relationship to continue, we will be working with Presbyterians around the globe to secure funding for the vital position of academic dean at OCMS.

Support for this position is all the more crucial at this critical juncture in the life of OCMS.  Dr. Wonsuk Ma, who has served faithfully as executive director of OCMS for the past nine years, has announced that he will retire in 2016.  His dedicated service has elevated the impact and stature of OCMS globally.  During his tenure we have seen the student body grow by nearly 20 percent.  Further, he has been a catalyst for OCMS’s growing leadership role in global theological education. Under his guidance OCMS has become a leader in mission publications through Regnum Books and, most notably, through the 28-volume Edinburgh Centenary series, which focuses on nine themes identified as being key to mission in the 21st century. With Dr. Ma now moving on, Tom not only serves as academic dean, he is the key transition officer to ensure a smooth handover to the new executive director.

Another major project has been to study the problem of government corruption that afflicts so many societies these days.  The global fight against corruption is now at the top of the world’s development agenda.  Anti-corruption study and reform are central to the development strategies and assistance programs of multilateral and bilateral development agencies, as well as the work of global and local NGOs. Tom has initiated a project through OCMS that aims to address and provide ways to reduce the prevalence of corruption. In-depth research on the nature and extent of corruption and the role played by Christianity in selected countries will allow researchers at OCMS to design and implement innovative and culturally relevant remedies to combat it. This research will also examine the serious gap between Biblical injunctions of good governance and the prevailing social norms in the targeted countries. The goal is to provide societies with higher standards of integrity and higher levels of sustainable development, and to show where the church is acknowledged as an example and an agent of social transformation and integrity. 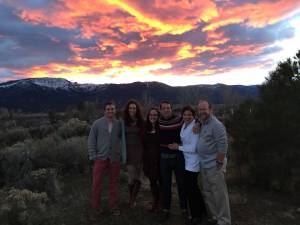 Tom recently spoke at the “Legislation, Ethics, and Religion: An Approach from the Context of Religious Freedom”conference held at the Palace of the Parliament, Bucharest, Romania.  The conference reunited about 120 leading scholars from prominent universities from Romania, United States, and the European Union. The conference, initiated by the Conscience and Liberty Association in cooperation with the Legal Committee of the Chamber of Deputies of the Romanian Parliament and in partnership with the International Religious Liberty Association and the Institute for Peace Studies in Eastern Christianity, brought together prominent personalities from the national and international academia who specialize in political science, philosophy, law, and theology.  Tom’s address was entitled “Faith and Its Indispensible Link to Truth, Ethics and the Rule of Law.”

In terms of the family, we love our new home just outside of Oxford on the edge of Wytham Woods.  Last year our landlady informed us that we would have to move from our home in Oxford along the canal.  By May of this year we still hadn’t found a place to move into, but Emma was able to spot an ad for a lovely three-bedroom cottage in historic Wytham.  Though a bit of a bike ride into the city centre (30 minutes), it is a quaint village of stone cottages, thatched roofs, and fields with sheep and cattle.

Joe and his bride, Susan, have moved to Boulder, Colorado, where Joe has begun his doctoral research in Behavioral Economics.  Susan has secured an excellent position in pediatric nursing in nearby Aurora.  Paul has taken a position in Dubai, United Arab Emirates, as a middle-school counselor.  They will all be flying in for Christmas, so we are looking forward to a festive Christmastide in our cozy cottage.

With the changes in the PC(USA) and at OCMS, this year represents a major challenge both for OCMS and for us as we go about raising the funds to provide for Tom’s key role as academic dean of OCMS.  We ask that you would join us in prayer as we move forward in God’s good providence through his people. Further, now more than ever, we need your continued faithful financial support of us at this key time in the life of OCMS.

As mission specialists, funds may continue to be directed through the PC(USA) to support our work.  As is strict policy with the PC(USA), you can rest assured that financial gifts designated for our sending and support will go toward our work and will not be diverted.

With much thanks for your ongoing prayers and support,
Tom and Judy