A letter from Martha Sommers, serving in Malawi

Individuals: Give online to E200526 for Martha Sommers’ sending and support

This September, I had the joyous opportunity of hosting my so very dear friend, Mphatso Nguluwe, for 10 days. She came from Malawi to the USA by the invitation of the PC(USA), as part of the Presbyterian Peacemakers Program. She was one of a number of international peacemakers who shared their experiences and wisdom in presbyteries around the country. Thankfully, she was able to join me in Chicago for fun before she started her itinerary, which included Kentucky, Iowa, Missouri, New York, New Jersey, and California. 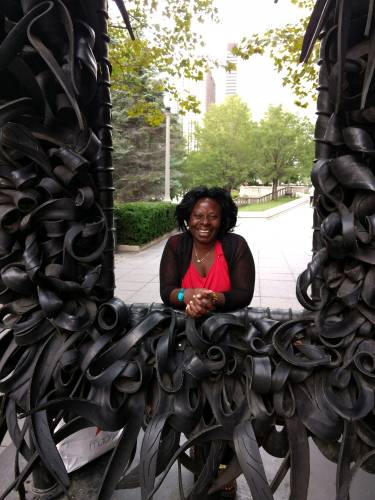 We had so much fun as she reconnected with some of my friends and family here, and I was able to share more people dear to me with her. I have learned so much about how to share family and friends from Mphatso since we became good friends back in the year 2000, while we both were working in Ekwendeni, Malawi. There were the trips to her home village near Nkhata Bay to visit her mother and family. So much sharing of stories and ideas under the stars, eating batara fish that her aunt roasted over the open fire, and picking the strings of mangoes out of our teeth after feasting on these fruits that the children had gathered up. Some friends made us meals here, yet I am better at eating out than cooking while in Chicago, with its endless great restaurants. Many long sweet chats occurred while eating at a variety of ethnic restaurants. It was fun to get together with Salome Chasnoff, who first connected with Mphatso when Salome interviewed her for the documentary “Brink of Survival” back in 2009. We laughed as, true to her profession, Salome first asked questions on issues. Then, she and Mphatso shared stories of children and grandchildren. Salome has children by birth and adoption, and now has the joy of three of her children and their families living near her and her husband. Mphatso is single and the adoptive mother of 10 children, and now a few grandchildren.

There were also days downtown, including shopping. We had fun finding clothes on sale to keep Mphatso warm and stylish, for the northern part of the USA in October is colder than the tropics. Shopping in large stores is a bit different from Malawi’s markets—bargaining is not part of the department store experience! 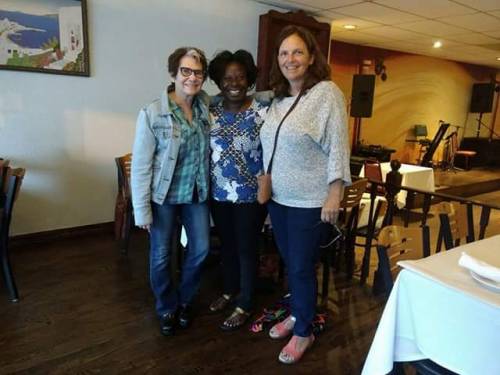 Mphatso Nguluwe with Salome Chasnoff and me.

Then, the final weekend, instead of escaping to Lake Malawi, we escaped to South Haven, Michigan, on the eastern shores of Lake Michigan. My niece, Natalia White, and her friend, Madeline Finn, were conducting a special workshop to celebrate my sister Mary’s birthday that included watercolor and intensive movement sessions. Mphatso shared that she found the weekend’s inclusion of the rest and rejuvenation that she needed to be perfect.

Mphatso’s present role with PC(USA)’s partner, the Synod of Livingstonia, is as medical director of their health department. The Synod of Livingstonia provides healthcare to close to 500,000 people. Ekwendeni and Embangweni hospitals, their health centers, and community healthwork are within the synod’s health department. Mphatso was asked to assume this position because the hospitals and health systems are going through very difficult times, especially financially. The hope is that she can turn the situation around, as she was able to do with the Synod of Livingstonia’s AIDS project, which now is the country’s leader in combatting AIDS and forced child marriages. 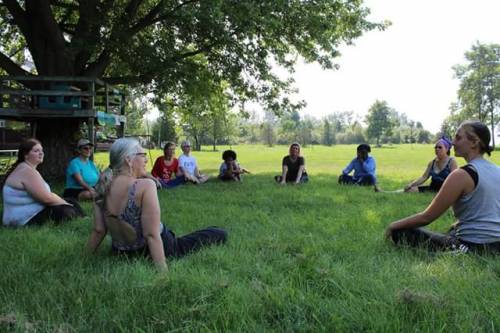 Breathing and Stretching before our Movement Session (Photo by Madeline Finn).

I spoke with Mphatso as she was returning to Malawi and asked her to send me some insights to share. She wrote,

“I had a great time in the USA meeting different people and having to share with them. Sharing in a land of plenty that in my country we use what we have and sometimes what we don’t have. People get better in spite of us. Our instabilities are made whole by the grace of God who in our weaknesses he makes us strong. The most surprising thing is that everything is so big from a teaspoon to a glass of water and even the ice is big. There are too many choices which can make one confused.

“So many times, I think we have taken for granted that people in the US know what is going on in small, quiet, and peaceful countries like Malawi, but being here I have realized that I was wrong. I feel it’s countries which are at war and those with mineral resources that are known. So there is a need to get the message out.

“Churches (in the US) are big and beautiful but empty. There was a time when energies were geared towards building churches and melting steel, but I feel that time has come where we need to melt hearts and build people.

“Despite the churches being half full, those in them are so warm and passionate for the Lord. This makes me realize that it’s not about the numbers but the quality. Those in the church are eager to serve the Lord with their hearts, souls, and minds and are overflowing with his love.”

As we approach Thanksgiving, I am especially thankful for each of you, and for the PC(USA)’s partnerships around the world that bring people together in love. If you are able, please continue to give financially to my ministry. I look forward to returning to Malawi after spending the holidays in the USA and speaking at churches.