A holiday letter from David Cortes-Fuentes and Josey Saez-Acevedo, serving in Cuba

Individuals: Give online to E200519 for David Cortes-Fuentes and Josey Saez-Acevedo’s sending and support

Congregations: Give to D507587 for David Cortes-Fuentes and Josey Saez-Acevedo’s sending and support

When David and I received this CD as a Christmas gift, it became one of our Christmas favorites. We both love it because it speaks of God’s Good News that is brought and left for all humanity through the birth of a little baby boy. Reminding us of the Good News that came forth in an obscure manger in Bethlehem to a people stripped of their faith, needing a Savior. Christmas is celebrated by many around the world, each with their own traditions. Yet the essence of the Christmas message remains the same, Good News for all humankind. This is true for Cuba as well. Although some may think that this message might fall on deaf ears in Cuba, be assured it has not.

Our Christmas experience in Cuba has been quite different than the experiences we had been accustomed to in the United States and in Puerto Rico. It is very quiet, with no Christmas greetings, Christmas music or TV shows, and no holiday store displays. And there are virtually no public displays of Christmas, except in churches, some individual homes and, of course, in tourist areas.

The good news, on the other hand, is that we are not bombarded with all the commercialism that one has to endure in the States. When we have returned to the States it just seems that “Christmas” arrives earlier each year. Not in Cuba. The Christmas holiday as we know it in Cuba is very different. How can we make sense of this when we come from a westernized worldview of the Christmas holiday?

Well, this took some research. We started by asking some of our closest Cuban friends. We were told that the official reason the Christmas holiday was suspended in 1968 was it interfered with the sugarcane harvest season. However, the Christian holiday of Christmas survived another nine years as a paid day-off holiday, primarily for secular reasons. Yet, many families discretely celebrated Christmas during these years of ban. In 1991, when the Soviet Union fell, Cuba’s religious designation changed from atheist to secular. Four years later in 1995, the Catholic Church (which is the official Christian church in Cuba) called for a greater respect for the Christian holiday of Christmas—this after the Cuban government banned any public displays of Christmas trees and nativity scenes, other than in tourist areas. In a radical gesture of goodwill in honor of Pope John Paul II’s visit to Cuba in 1997, Fidel Castro reinstated Christmas as a national holiday. Although Christmas is a national holiday, there is not much national celebration. Christmas is overshadowed by New Year’s and the celebration of the Triumph of the Revolution coming into power (January 1, 1959), which happens to coincide with the first of January. 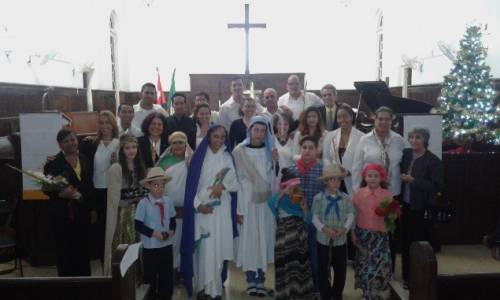 Nevertheless, the traditional Advent/Christmas pageants, musicals, potlucks and the Christmas Eve Services are celebrated throughout the island by Christian congregations. They are, however, low-key and less extravagant, in part because of Cuba’s economic situation. Our first Christmas in Cuba, David and I gathered with several families who stayed at the Seminary for a shared meal on Christmas Eve. We shared a simple dish of pork, a green salad and boiled root vegetables. We contributed with a traditional Puerto Rican rice dish, pigeon peas and rice (a dish known as arroz con gandules). These were our gifts to each other: the joy of being together, sharing at the table and playing dominoes.

We have seen some homes display Christmas lights on their balconies and windows and have been told this is because of the influence of many more Cuban-Americans travelling to the Island to visit with loved ones. By adding their own traditions and customs, the Cuban people have embraced this celebration and adapted it to fit their needs. But Christmas traditions have never been lost for the Cuban Church. Now that the Cuban people are attending church again, more people are also embracing the celebration and traditions of Christmas. One tradition that has endured the test of time has been the Epiphany Day celebration (Three Kings’ Day), which is celebrated on January 6. Although Epiphany is not a paid holiday, if it happens to fall on a weekday, the families celebrate it the weekend before by giving sweets and small gifts primarily to children. Epiphany is a tradition celebrated by both Cuba and Puerto Rico (and other Latin American countries), which makes us feel very much at home.

The celebrations and traditions commonly shared by the Christian world are also very much alive in the Cuban Church. Its joy and excitement are palpable. They too, continue to receive the Good News announced by the angels. The Reformed-Presbyterian Church in Cuba has received the Good News of the birth of our Savior for more than 120 years of their existence. In spite of the many years of silence because of the public ban, the Good News could not be silenced. The Good News continued to be spoken and shared, discreetly, quietly, nevertheless shared in worship and homes. It is because of God’s persistence and the Cuban Church’s resistance, persistence and resiliency that today David and I are so blessed to be part of the new sense of hope in the Cuban Church. Good News, Good News, an Angel Continues to Bring Good News!