A Letter from Janet Guyer, serving in Malawi

Individuals: Give online to E200351 for Janet Guyer’s sending and support

Congregations: Give to D506385 for Janet Guyer’s sending and support

Happy Thanksgiving, and now Advent. As I look back on my much-too-long silence, I see that there were many things to be grateful for in the past year, although it was a challenge to be grateful for some of them. Through it all, my thanksgiving is that God was there even when I didn’t clearly realize it. Here is a thumbnail sketch.

On New Year’s Eve 2017 and January 2018 our parents died, three weeks apart from one other. My brother and I were not expecting this, so, needless to say, 2018 started out with a massive shock. Fortunately, the memorial service that was going to be held for my father at McCormick Hospital in Chiang Mai, Thailand, where he worked for 37 years as a missionary, was scheduled for four days after Mom died, so his memorial service became a memorial service for both. Thanks to support from the PC(USA) World Missions Office, I was able to travel to Chiang Mai in time for the service. The hospital did a wonderful job pulling together pictures and putting together a history of both mom and dad’s mission service. Friends from way back when attended, including Pa Sri (Aunty Sri), whose photo of greeting mom and dad when they arrived in Chiang Mail in 1952 is a heart-warming tribute to their friendship. While in Chiang Mai, I decided that I was so shattered that I would stay two weeks and see some old friends. It was wonderful. 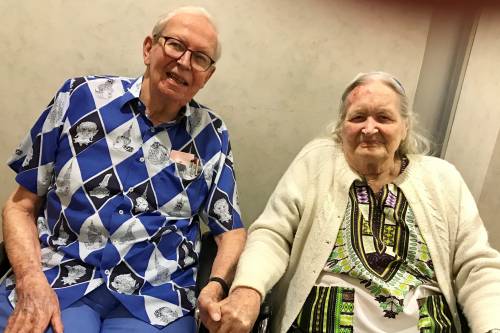 About two weeks after returning from Thailand, the Director of the Africa Office called and asked if I would be willing to make some changes in my job description. Would I be willing to move up to Mzuzu in northern Malawi, Livingstonia Synod, to work primarily with the Synod’s Women’s Guild Department? I agreed, and we decided that I would spend 30% of my time as Interim Facilitator for Women’s and Children’s Issues and the rest of the time as a Program Associate for the Women’s Guild Department.

In April I took a trip to Zimbabwe to work with folks there. It was good to see everyone. I ask your prayers for our friends in Zimbabwe. Between the new government, a terrible drought, and a strike of both the senior and junior doctors because of untenable work conditions, life in Zimbabwe is tough, to put it mildly.

April to July were spent trying to find a house in Mzuzu. In the end, God came through again. The Men’s Guild was building a nice house on the Synod compound but had run out of funds to finish it, so only the chickens were living there. World Mission and The Synod of Livingstonia Men’s Guild came up with a solution. WM advanced the money to finish building the house, and I am now living here rent-free until the advance is paid off.

The challenge then was to finish it. There were months of, “It’s almost finished, just give us a couple weeks,” until I just had to move into it in mid-July since I had to vacate my house in Lilongwe. Again, I can say that I saw God’s hand in this all. Four young friends came over to Lilongwe for a couple days and we got the house all packed up. Then they travelled up to Mzuzu with me, hoping to help get everything unpacked. However, there was only one set of shelves in the pantry, one small cupboard in two of the four bedrooms and no storage in the others and yes, no cupboards in the kitchen. Needless to say, not much got unpacked.

Another sign of God’s hand at work was finding a delightful young man, brother to one of the Men’s Guild members, who was out of work, loves animals and was willing to come live in my house while I was away. Ginger the Cat and I were both relieved that Ginger would be well taken care of.

The day before leaving to go to the US, there were so many people who dropped by just to say, “Hello … Good bye … We can’t wait for you to get back and are looking forward to working with you.” It was an overwhelmingly warm greeting/farewell from neighbours and others who live in the compound.

In the U.S. I was based in Pasadena at the House of Rest, which is a home for missionaries and church folks when they are in the U.S. But first I travelled to Louisville to attend the Presbyterian Women’s Gathering with Rev. Debbie Braaksma, the WM Director for the Africa Office. It was great to see the interest of the women in our presentations, and I loved chatting with them over dinner.

The next major event was the memorial service for my parents in the U.S. A big thanks goes to the First Thai Presbyterian Church in Covina, California. They asked how I wanted the memorial service to go, what I wanted to do, and they planned the rest. This church is home for many friends from Thailand who have moved to the U.S. The service went very well. People shared happy memories of my parents, some of which were new to me. I was deeply touched that the Medical Director of McCormick Hospital took the time and expense to fly to California from Thailand for the day, and then flew back again. As the days went by, the sadness slipped back in, as that memorial service felt like I was saying my last farewell to my parents.

That brings us to a long stretch of time in the U.S., where I had surgical replacement of both knees. If you have had the surgery, you will know that everything seemed to take longer than expected. Finally, in April I was able to travel back to Malawi. About eight hours of the trip were pure torture; the rest of it was quite comfortable. I rested for a couple days in Lilongwe before the five-hour car trip back up to Mzuzu.

So here I am, slowly settling into my house and settling more quickly into the Women’s Department. As far as cupboards go, I just had four new cupboards put into the kitchen (they were promised for July). Since a friend from Lilongwe moved back to Greece, I was able to buy a couple of her cupboards and dressers. I hope that by Christmas the boxes will be gone.

There is so much more to share. This is just a beginning. In the next few weeks you will be receiving more news as I work to bring you up to date.

Thank you for your continued interest, prayers and communications. May God continue to be with you, bless you and guide us all.

Greetings in Christ! As the interim director of Presbyterian World Mission, I am grateful to have the opportunity to thank you for your continued support of PC(USA) mission co-workers.

The enclosed newsletter bears witness to some of the many ways in which God is at work in the world through long-standing relationships between global partners and the PC(USA). These partnerships are nurtured and strengthened by the presence of mission co-workers in over 40 countries; you are an important part of this partnership too, as you learn about and share how our church is involved in global ministry; as you pray for our partners and mission co-workers; and as you take action to work with others for God’s justice, peace and healing.

I write to invite you to continue joining us in partnership in three ways. First, your prayers are always needed. Please pray that God will continue guiding the shared work of the PC(USA) and global partners as we engage together in service around the world. Pray, too, for mission co-workers, that they may feel encouraged in the work they are doing under the leadership of global partners.

Second, please consider making a year-end gift for the sending and support of at least one mission co-worker. There is a remittance form at the end of this letter and an enclosed envelope so that you can send in a special year-end gift.

Finally, I encourage you to ask your session to include one or more mission co-workers in your congregation’s mission budget for 2020 and beyond. PC(USA) mission co-workers’ sending and support costs are funded by the designated gifts of individuals and congregations like yours; your gifts allow Presbyterian World Mission to fulfill global partners’ requests for mission personnel.