Register today for the June 23 (2pm EDT) online Matthew 25 event that will look at hunger and food insecurities.
Make A Donation Click Here >
Home › What We Do › Where We Work › Co-workers › Glory to God

A Letter from Judy Chan, serving in China

The 500th Anniversary of the Protestant Reformation was not forgotten in Hong Kong. Asian Christians may seem far removed from the events of Europe in 1517, yet churches of every background marked the anniversary year with worship services, theological discussions, seminars, publications, and even an overseas trip for unity. Let me highlight three events of the Hong Kong Christian Council that took place in 2017.

The first was an ecumenical trip to Germany and Italy in late May to early June. The Hong Kong Catholic Church initiated the idea as a concrete way to journey together, reflect on the Church’s past, and walk the second mile for the Church’s future. There 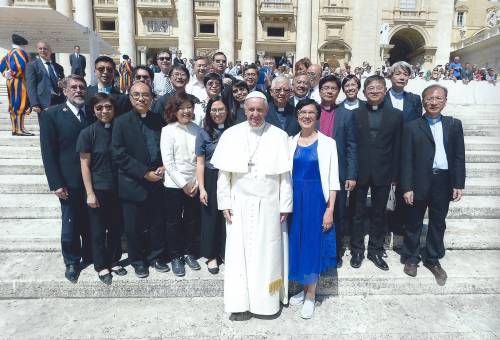 were 24 participants in total from both Protestant and Catholic churches. The itinerary included visits to Wittenberg, Augsburg, Trent and Rome. One highlight was attending the weekly public service conducted by Pope Francis in St. Peter’s Square. Afterwards, the delegation had a chance to present a gift and take a photo with him. They reported that the Pope asked them to please pray for him. One of the Hong Kong Anglican bishops responded, “Please pray for China!” The Holy Father assured them, “I pray for China every day.” After the trip, Rev. Po Kam-cheong, HKCC General Secretary, recalled the Chinese saying, “People before plant a tree, the people afterwards can enjoy the shade.” It is our hope that we all plant the seeds of unity and later they will bear the fruits of love and peace. 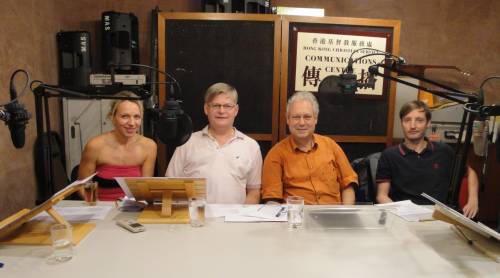 Another activity closer to home was a radio service on RTHK, Hong Kong’s public broadcaster. For the past seven years, the German-speaking Lutheran Congregation in Hong Kong has organized a Sunday worship in English to air on Reformation Sunday. This ecumenical broadcasting ministry is sponsored by the Hong Kong Christian Council, and I serve as the Producer. On October 29, we were delighted to hear traditional and contemporary Reformation hymns along with an inspiring liturgy from the Lutheran World Federation. The theme of the service was “Liberated by God’s Grace.” We were reminded of different aspects of the theme that are still relevant today: Salvation– Not for Sale; Humans Beings– Not for Sale; Creation– Not for Sale. The pressing issues of human trafficking and environmental protection are international problems that likewise require God’s grace and the church’s response. The pastor of the German-speaking church, Rev. Volker Thiedemann, had arrived in the city only one month earlier. Still, he delivered a heartfelt message to Hong Kong on Martin Luther’s four “Solas”: Sola Scriptura (by Scripture alone), Sola Fide (by Faith alone), Sola Gratia (by Grace alone), and Solus Christus (by Christ alone). 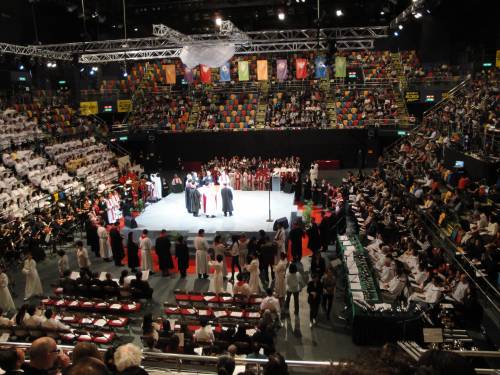 The latest event was the Commemoration Service of the 500 Years of Reformation on October 31. This grand finale was co-sponsored by the Hong Kong Lutheran Federation and the Hong Kong Christian Council. While many Hong Kongers were celebrating Halloween, nearly 3,000 Christians gathered at the Queen Elizabeth Stadium for a spectacular evening of choral music, praise dance, congregational singing, prayers, preaching and Holy Communion. Many afterwards commented that they were so thankful to attend the service and that the Lutheran Church had opened the event as an ecumenical celebration for all Christians. And, indeed, the promises of Psalm 46 which we sang in Martin Luther’s hymn “A Mighty Fortress” are as essential today as they were five centuries ago.

God is our refuge and strength,
a very present help in trouble.
Therefore we will not fear, though the earth should change,
though the mountains shake in the heart of the sea;
though its waters roar and foam,
though the mountains tremble with its tumult.
God is in the midst of the city, it shall not be moved;
God will help it when the morning dawns.

Let me thank you for your concern and care for Hong Kong, China, and our ministry at the Hong Kong Christian Council. Please continue to lift up our work through your financial support and prayers. Global events like the 500th Anniversary of the Reformation are precious opportunities to lift up what we hold in common as the worldwide body of Christ and to humbly contribute our unique gifts as individual members of it. Soli Deo Gloria!

With all best wishes,
Judy Chan