Individuals: Give online to E200529 for John and Gwenda Fletcher’s sending and support

Congregations: Give to D501278 for John and Gwenda Fletcher’s sending and support

It was, as usual, a rather busy day and I was rushing to get to the morning surgery clinic.  It didn’t help that now someone was pulling me aside and wanting me to stop and talk with her.  At first I was all about my rush to get to clinic, but gradually I began to realize that this was somehow more important.  The young woman asked if I might remember her.  She explained that almost 20 years ago she had been a patient at the Good Shepherd Hospital and I had taken care of her.  She thanked and praised God because her life had been saved by the Congolese Presbyterian Church (CPC) medical program.

You might recall that in the beginning of the well-known story in Matthew (Matthew 14) about the feeding of the 5,000 there is a verse, which is often overlooked: “When Jesus landed and saw a large crowd, he had compassion on them and healed their sick.”  The CPC, through their network of hospitals, seeks to provide that compassionate healing ministry to a population largely without access to medical care.  This was precisely the compassionate care that was provided to the young woman who now had hold of my arm. 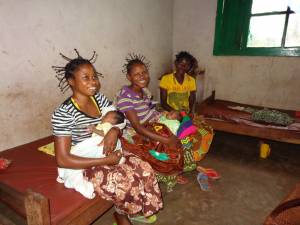 She (I will call her Tshibola) had fallen ill as a child just 6 years old and the treatment given to her by traditional healers and by the health clinic in the remote village where she lived with her family only served to worsen her condition.  Tshibola’s mother realized that her only choice was to take her daughter to the Congolese Presbyterian Church mission hospital, Good Shepherd Hospital, in the distant village of Tshikaji.  They arrived after a long and difficult trip.  When a careful evaluation had been completed, it was clear that she needed emergency surgery.  When Tshibola had been stabilized and prepared for surgery, we prayed with her and her mother, and she underwent life-saving surgery.  After a long recovery period and complete healing she came to know Jesus Christ as her Lord and Savior and felt God calling her to become a doctor so that she could minister to others just as we had ministered to her.  That is why she had pulled me aside.  She wanted to tell me that she, now a doctor, was the little girl God saved so long ago, and that she was a Christian doctor serving the population of the Congo in her community.  Praise the Lord!

Rev. Zacharie Mboyamba, who oversees the CPC medical program, spoke to me about the importance of Presbyterian World Mission (PWM)’s emphasis on the alleviation of poverty, one of three “Critical Global Issues” identified in PWM’s strategic directions.  The others are Evangelism and Reconciliation.  Health care falls under the poverty category because poverty leads to ill health and ill health leads to poverty—a vicious circle.

As Pastor Mboyamba explained, Congo’s families are living at the margins, with little room to cope with adversity.  Illness and injury can easily drive them into unsurvivable poverty.  At the same time poverty itself increases the risk that they will be injured or become ill, and once they fall ill they will not have money to pay for care and will be unable to seek medical attention.  Pastor Mboyamba says that health care ministries are vitally important because “in the Congo it is easy to die—but hard to stay alive.” 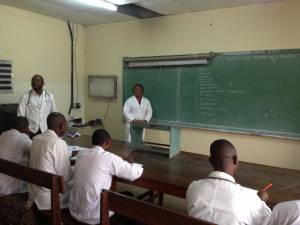 I thank God that through partnership with the CPC I can participate in the healing ministries of the CPC as a medical educator and as a physician helping to provide healing—compassionate, loving healing as Jesus described in Matthew—to the people of central Congo.

We have been in the U.S.A. since December 2015 and we have enjoyed very much meeting many of you as we travel around the U.S.A. speaking in churches.  We have enjoyed getting to know many of you we had not met before and connecting again with others we have not seen for some time.  It has been a great joy for us to see how committed you are to supporting the work in the Democratic Republic of Congo (DR Congo).  Sometimes the work and the problems seem too big and too difficult, but we can take comfort in the words from Isaiah 40:31: “Those who hope in the Lord will renew their strength.  They will soar on wings like eagles; they will run and not grow weary, they will walk and not be faint.”

As many of you are aware, during 2014 Presbyterian World Mission experienced a significant shortfall in funding for support of mission personnel.  Due to this shortfall World Mission was unable to replace retiring mission personnel and had to prematurely end the service of other mission personnel.  When churches and individuals were alerted to the shortfall, there was a strong and very encouraging response.  We pray that this response will be sustained, allowing the important mission of the church to continue.  We thank you for your continued faithful financial gifts that provide for our support.  Please continue to support us as we prepare to return to DR Congo. Thank you also for your prayers; without your prayers and your support we would not be able to continue to serve in the DR Congo.