Register today for the June 23 (2pm EDT) online Matthew 25 event that will look at hunger and food insecurities.
Make A Donation Click Here >
Home › What We Do › Where We Work › Co-workers › My Middle East Springsteen Pilgrimage

A letter from Scott and Elmarie Parker serving in the Middle East, based in Lebanon

Individuals: Give online to E200504 for Scott and Elmarie Parker’s sending and support

Congregations: Give to D507569 for Scott and Elmarie Parker’s sending and support

From Scott:
I’m a big Bruce Springsteen fan.  There’s something about his working-class ethos that I love.  Over the years I’ve made about seven road trips, or “pilgrimages” as I like to call them, to see Bruce in concert.

During October 2015 I made a different kind of pilgrimage:  I spent two weeks living with families in Northern Iraq who lost their homes when ISIS (pronounced Da3sh in Arabic) took over Mosul in 2014.  About half of that time was spent at a Presbyterian church in Kirkuk that houses about 15 displaced families (around 65 people).  I slept in the pastor’s office, showered with a hose in the utility room, and since it was dangerous for me to be in public unattended, spent a lot of my time with the families that now call the church campus home. 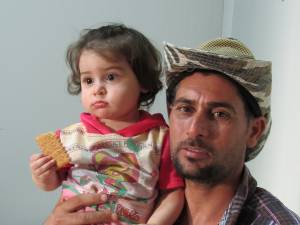 Father and daughter now living in an IDF (Internally Displaced Families) camp in Erbil, Iraq after ISIS forced them from their home in Mosul

The families living at the church took turns providing my meals, each time escorting me to a different “home.”  Families of four to six members live/eat/sleep in converted Sunday school classrooms (most still adorned with Minnie Mouse drapes).  I would typically be offered a seat on one of four beds pushed against the wall, and a plastic fold-up table would be brought in to make the dining room transformation.

The father of one of these families, Feiss, is about my age with two kids.  His wife works with the preschool run by the Presbyterian church, even though they are—like most of the families at the church—Assyrian Orthodox.  This is a gift, given that unemployment in Kirkuk is sky-high.

My first meal with Feiss was a breakfast, after his wife and kids had left for school.  He directed me to a seat on the nicest bed with a particular gleam of pride in his eye.  This was a feast, even by Middle East standards.  Breads, meats, egg dishes, and bowls of olives, cucumbers, yogurts and jams.  Turns out that Feiss, in his former life, was a restaurant owner (I made a mental note:  “Jackpot!”).

Feiss had his own restaurant in Mosul; now, nothing.  While some people evacuated the moment that ISIS/Da3sh attacked, most families remained.  They were convinced that the U.S. could and would crush ISIS in a matter of days.  That didn’t happen, so they and hundreds of thousands were forced to surrender their property to the so-called Islamic State and leave with nothing but the clothes on their backs.

And they came to Kirkuk—where the Presbyterian church gave them a home.  Before August 2014 they were strangers; now they are family.

Feiss showed me pictures of his dream house—which was almost complete at the time that ISIS/Da3sh took it; and his restaurant—which still operates in Mosul, but as somebody else’s property.  “When I was younger, I spent all of my time working so that my wife and daughter would have a home and a future,” he says.  “I would come home when she was already asleep.  A year ago Da3sh took my home away.  But now I have time with my family. 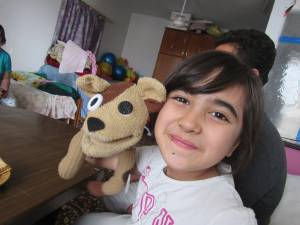 Rocko and one of the kids who lives on the Kirkuk church campus.

We talk about when they fled Mosul.  Some church members had figured out that by pointing out the homes of other church members to Da3sh/ISIS, they could stay and keep their homes and incomes.  Feiss called these people “traitors.”  “We could have stayed by giving up our faith in Jesus Christ, or by having Da3sh take away our dignity by killing or rape.  We left with our faith and our dignity.”

Feiss shares with me his fears for his daughter and son:  “Is there any future for them here in Iraq?  Would it be best to leave for another country?”

I share with him Elmarie’s and my interest in exploring how Presbyterians in the U.S.A. could work with the Presbyterian church in Iraq to help displaced families like his to start new small businesses.  He likes this idea, but later identifies the fear and hesitation he feels.  What if one day he is able to return to his home village but now has roots and a business somewhere else?  While some families are hoping to emigrate to another country, Feiss still hopes someday to return to the home of his birth.

As we talk, I can’t help but think about Bruce Springsteen—the dignity of hard work; the love of one’s home; the hope of passing on a good life to one’s children; the pain of being held back from the basic human goals of working a job and providing for one’s family.

Funny how I had to go all the way to the Middle East to find the heart of those ideals.

From Elmarie:
In October 2015 Scott lived and shared life with many families in Northern Iraq who had been displaced by the advance of I.S.I.S. over the summer of 2014.  He spent time with Christian, Yzidi, and Muslim families—all who had lost everything in this human-made catastrophe.  In this letter, he has shared the story of one family with whom he spent time.  We invite you to discover other stories at www.findaworld.org. Scott also has four videos that share the impact of the frontline work carried out by our church partners. Please contact us at eparker.rl.isli@gmail.com to request the DropBox links.  They are suitable for use in worship, education settings, and can be shared as a link on websites or social media.

We are exploring with our partners in Lebanon, Syria, and Iraq how Presbyterians in the United States can partner with them to help families begin again—especially small businesses that can help families sustain themselves in the present and begin again to envision a future for their children.  This is an absolutely essential step to help them find a way to stay in their ancient homelands.

While hundreds of thousands are trying to seek refuge in other countries, the reality is that less than 1 percent of those who have been displaced from their homes ever make it through the rigorous and limited resettlement process to make a home in the West.  This means that millions of families are often stuck for generations in refugee camps, especially if there is no way for them to return to their home countries and begin building a new future for their children.

Our church partners in the Middle East do not want this outcome for the displaced families they are currently aiding—Christian, Yzidi, and Muslim.  They want to contribute to laying the foundation for a sustainable peace through job creation for adults who have had their businesses stolen or destroyed and through education for children who have lost access to their schools.  We invite you to stand with the church in the Middle East to help strengthen and expand this kind of work.

We thank you for your partnership that allows us to represent you and your concern as we work alongside our partners in the Middle East during this challenging season.  We value your continuing prayers, visits, correspondence, and financial support.  This is what allows us to stay and continue in this service.