A Letter from Choon and Yen Hee Lim, serving in Korea

In response to President Trump’s threats of “Fire and Fury” to North Korea in a recent speech, tensions around the Korean peninsula have dramatically escalated. Up until that time, tension had been gradually rising with the two countries’ back and forth threats.

In the midst of these tensions on the Korean peninsula, we have determined that there are peacemaking steps that we can take. At the beginning of July, I took a two-week trip with our partner churches in the National Council of Churches in Korea (NCCK), during which they shared their peace treaty campaign with partner churches in Europe. They called upon their church partners to put pressure on their governmental representatives to move the international diplomatic community toward dialogue with North Korea. 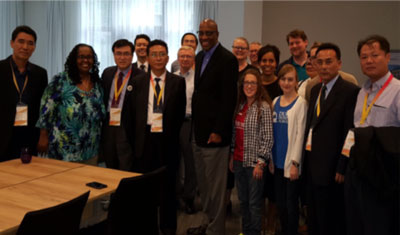 On the trip, we met with four delegates from the only Christian organization in Pyongyang, the Korean Christian Federation (KCF), who took part in the World Council of Reformed Churches’ (WCRC) Assembly in Leipzig, Germany. Stated Clerk J. Herbert Nelson and other delegates from the PC(USA) attended and met the officials. We discussed the campaign for a peace treaty and shared thoughts on how North Korea is responding to comments from the new South Korean president’s and the new U.S. president’s administrations.

The most important work we did at this meeting was collaboratively composing a prayer for peace in hopes that God will help to resolve the Korean conflict and reunify the peninsula through peaceful means. Every year, the KCF and the NCCK collaboratively prepare a joint prayer and worship liturgy for the August 15 anniversary of liberation from Japanese occupation and the beginning of Korea’s division into two zones and eventually two nations. This year, Yen Hee and I followed the liturgy as we worshiped in an ecumenical service at the Jun-Nyong Methodist Church in Seoul, Korea on August 13.

During the WCRC Assembly, we also planned a peace trip to South Korea that will take place from October 31 to November 8. At our 222nd General Assembly (2016), the PC(USA) approved publicly supporting the victims of the No Gun Ri incident. To express such support, the Office of the General Assembly (OGA), together with the Presbyterian Mission Agency (PMA), planned a visit to the No Gun Ri Peace Park and other peace-related places in South Korea. Associate Stated Clerk Robina Winbush and Area Coordinator for Asia and the Pacific Mienda Uriarte have invited 18 delegations from OGA, PMA, and Korean churches to take part in the peace trip. These delegations will visit the Border Peace School, the Korean National Assembly, and the War and Women’s Human Rights Museum. This museum brings to light the experiences of “comfort women”—women who were forced into sexual slavery by the Japanese military during World War II.

In addition, the delegations will be conducting a peace forum with partner churches—the NCCK, the Presbyterian Church of Korea (PCK), the Presbyterian Church in the Republic of Korea (PROK)—and the Peace Press Conference, among other entities. But the major event of this peace trip will be to visit No Gun Ri Peace Park, where our delegation will apologize to the victims of the No Gun Ri incident and their families during a memorial worship service. 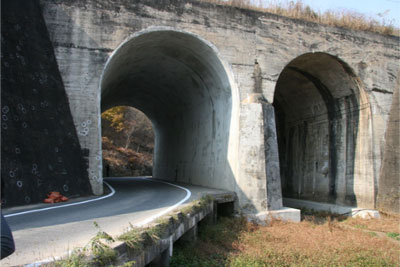 Under the rail tracks, the villagers hid in the two underpasses in No Gun Ri.

The No Gun Ri incident involved U.S. forces coming upon a village called No Gun Ri as they moved south away from the oncoming North Korean forces. On July 23, 1950, the U.S. soldiers told the villagers of Jugok-Ri to evacuate in preparation for the coming North Korean forces. On July 26, the evacuees were stopped by another division of U.S. soldiers who searched their belongings for weapons and then ordered them up onto some railroad tracks. Soon after, several U.S. fighter planes swooped in, strafing and bombing the village group. The villagers left the railroad tracks and headed to a bridge near the No Gun Ri village under which they intended to hide. U.S. soldiers set up a perimeter on both sides of the bridge and began firing into the group under the bridge. The attack lasted for three days and four nights, ending on July 29. In committing this atrocity, U.S. soldiers were obeying orders from their superior. As a result, more than 300 villagers were killed, most of whom were women, children, and the elderly.

To move into the future, we must remember and come to terms with the past. As the biblical prophets revealed, we must love our country enough to remember its misdeeds. Only by telling the truth can we move to reconciliation that opens new possibilities for peace.

On November 2, 2017, Dr. Nelson will be among the delegations at the No Gun Ri Peace Park delivering the apology to the victims and their families in person.

We’d like to end our mission letter with the Bible verse we used during the ecumenical worship service in Seoul on August 13, 2017: “Let us therefore make every effort to do what leads to peace and to mutual edification” (Romans 14:19). We pray that God will make us agents of peace in this troubled world.

Please continue to pray for peace and reconciliation on the Korean peninsula and for our Korean peace trip. Furthermore, please support us financially so that we can continue to work towards peace.