For the past seven years, I (Choon) have been serving all of East Asia — Japan, Taiwan, Hong Kong, Mainland China, North Korea, and South Korea — as a regional liaison. I began to visit China in 2000 with Rev. Jeff Ritchie, who served as a coordinator of evangelism in the Presbyterian Church (USA) and later as associate director of the Outreach Foundation. Jeff and I have done mission in China together for about 20 years. The China Christian Council (CCC) has a three-self policy: self-governing, self-supporting, and self-propagating. Since the CCC is one of Presbyterian World Mission’s partner churches, we respect their policy. We place a high priority on our relationship and friendship with the church in China. We try to do a China trip once a year. Furthermore, we work to equip China’s churches. For example, we provide study Bibles for lay leaders and seminary graduates, and we send mission co-workers like John McCall to provide continuing education for lay leaders, seminary students and pastors. The PC(USA) plans to continue to contribute to the quality of theological education in China. 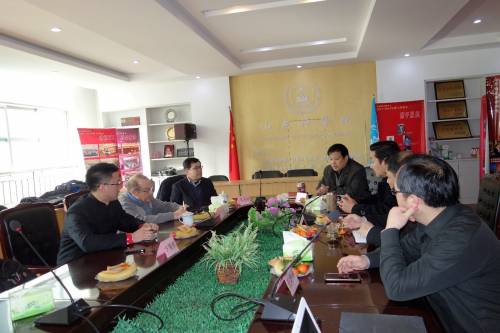 Meeting at the Shandong Seminary in Shandong Province, China. Jeff Ritchie appears second from the left, and I sit to his left. In the back is Gao Ming, director of the seminary. Choon & Yen Hee Lim mission co-workers serving in east asia

The Presbyterian Church established its Board of Foreign Missions in 1837, and China was its first foreign mission field. It was also the largest mission field for Presbyterians. “For over one hundred years, ‘China Missions’ was the single largest item in the benevolent budget of the General Assembly,” wrote G. Thompson Brown. At least 1700 American Presbyterian missionaries served in China between 1841 and 1949. Although it had been the largest mission field of the Presbyterian Church, the founding of China in 1949 ended the missionary era. Missionaries were expelled; churches were forcibly united to be one; and finally, during the Cultural Revolution of 1966-76, all churches, mosques, and temples were closed. In 1979, as China began to open itself to the world again, the churches in China started to reopen. With 1.4 billion people now, China has the largest population in the world. About 40 million (registered) Christians live in China. Since 1980, the Presbyterian Church has worked with the CCC.

In October 2018, I had an opportunity to visit many churches and organizations in China with Presbyterians from the US. I visited the Amity Foundation (NGO); Union Seminary; Jiangsu Seminary in Nanjing; Suzhou Seminary in Suzhou; Jiangyin People’s Hospital in Jiangyin; Harbin Seminary in Harbin; Shandong Seminary in Shandong; and the National CCC office in Shanghai. During this trip, I saw that Christians in China are eager to worship God and learn the Bible. When I preached in Mandarin at the Hallelujah Church in Harbin, a church of 10,000 members, every seat was filled, with some left standing. I truly felt God’s presence there. 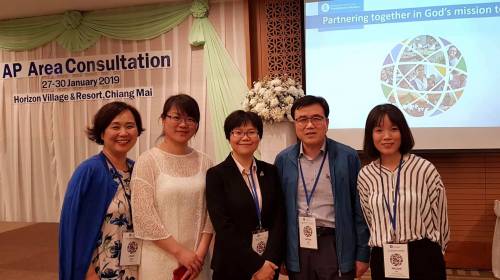 On January 28-29, PC(USA) World Mission held an Asia and Pacific global partner consultation in Chiang Mai, Thailand. More than 50 representatives came together to discuss the effectiveness of current partner relationships, what it means to be partners in God’s mission today, where God is calling us to put our energy, and what resources are needed to move forward.

Mission happens through relationships. The meeting in Chiang Mai was the first international global partner consultation in Asia and the Pacific region. Even representatives from our partner church — CCC Associate General Secretary Rev. Dr. Manhong Lin and CCC staff member Ms. Jingqin — participated in this meeting. A director of the church relations department of the Amity Foundation, Rev. Shen Zhanqing, also attended. With the Amity Foundation, the PC(USA) has two programs now, the Young Adult Intercultural Program and the Diakonia Training Retreat, both of which occur biennially. 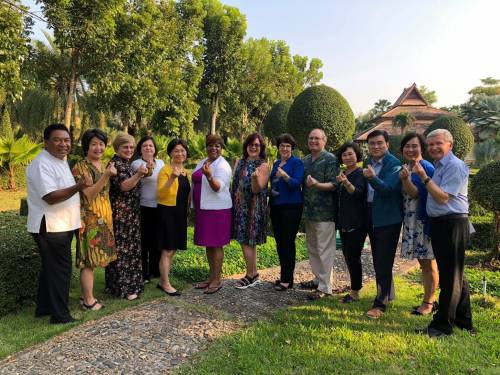 During the consultation, the Rev. Dr. Diane Moffett, president and executive director of the Presbyterian Mission Agency, challenged the participants, saying, “As with many of our congregations, mid councils and other groups, Matthew 25 is a natural fit for our partners in the Asia Pacific as they labor to eradicate systemic poverty, dismantle structural racism and build creative vitality within the congregations and communities they serve.” Matthew 25 tells Christians how to take care of the poor, the homeless, and the prisoner, etc. Like churches in the US, the churches in China face many of these issues. Many in the west of China suffer from severe poverty. There are 56 people groups in China that sometimes struggle to live together in harmony. To create vitality within the congregations and Christ-centered communities in China, the churches need to show hospitality to those who are sick, to prisoners, and to strangers. While we serve and bless others, God gives us abundant blessings to serve others more, and to serve them joyfully.

As we strive to fulfill God’s mission, we should continue to engage with the churches in China to build strong relationships and equip them in this challenging time. I trust that almighty God will sustain and keep the people of China in God’s hand. Thanks for your prayers, encouragement and financial support that allow us to see God’s Kingdom in East Asia and beyond.