Building a Life of Faith. Support the Pentecost Offering.
Make A Donation Click Here >
Home › What We Do › Where We Work › Co-workers › A Garden of Students

Congregations: Give to D507524for Kay Day’s sending and support

As you rake the final leaves and make preparations for Winter, I am enjoying roses in bloom. I have cultivated a bush in my front yard which bore 28 buds at one count, some fully blossomed and other buds just sprouting, At the same time classes have begun; a new academic year has started. As I passed the rosebush on the way to class the other morning, I was struck by the comparison of those flowers to my students.

The seniors are much like the roses in full bloom. I think of Angelique, who was the youngest of her class and, when she arrived, was more immature than any of the other students. I sometimes wondered if she had the strength to survive, but in this last year she has become confident and capable. She has mastered English; how well I remember that during her first year she would not even speak. She has preached in English twice in the last two weeks and not only was her English good, but her message was thoughtful and appropriate and mature. 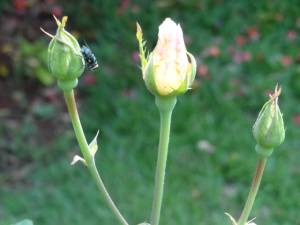 Then I think of the juniors who are like opening blossoms. They still have maturing to do, but they are developing so beautifully—like Jerome. He entered the Protestant Institute of Art and Social Science (PIASS) with confidence because his father is a pastor. He was certain he had his father’s style and that that was enough, but as he has studied and learned, he has grown. He has learned to ask questions and slowly is developing a style of his own. He is finding his own voice to express his sense of call as his time in the classroom expands his vision of ministry. He is beginning to blossom into his own person.

Gady, in the second year, also the son of a pastor, was so tentative last year. It seemed as though he was here because his father willed him to come. I know his father was proud of Gady’s decision, but I wondered if it weren’t more his father’s decision than his own. Yet this year he is beginning to open up, like a maturing bud. He is demonstrating confidence and beginning to question in a constructive way. He is finding his own place and opening to God’s direction. 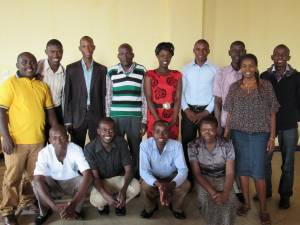 The first-year students have not even had a month of classes. They are still overwhelmed and uncertain. Several of them arrived later than the other students and that has caused them to be even more hesitant. The married students have had to leave their families behind and are now living in the dormitory with other students. Some have come from remote areas and are struggling with the “city” life of Butare. They are reluctant to say much of anything, especially when they have to do it in English, a language in which they cannot yet express themselves with confidence. We are working together on English this first month, to give them more confidence. They are tight buds, just sprouted.

Please pray for this garden of students who are beginning this new academic year. Please pray for me, as I work to give them the English skills and the preaching skills they need to grow and flourish. My prayers are with you as we come to the last sixth of this year. May you also continue to grow and blossom in Christ’s love.

As 2015 ends, please receive my deepest thanks for your continued support for my ministry.  Your prayers, your frequent greetings, and your financial support keep me grounded and make it possible for me to serve here in God’s mission.  If you have not so far provided financial  support for this work, would you please consider doing so?  Thank you!  God’s richest blessings in the new year.

Kay (Cathie to the family)