Building a Life of Faith. Support the Pentecost Offering.
Make A Donation Click Here >
Home › What We Do › Where We Work › Co-workers › A Four-Day Rally

Congregations: Give to D507524for Kay Day’s sending and support

Envision with me. The official Presbyterian brass band had driven the three hours from Kigali into the mountains of Kilinda to lead the procession of pastors to the open-air ordination service. Seven new pastors would take their vows as a culmination to the annual four-day evangelism rally. The procession was greeted by a line of traditional drummers who led greetings and ovations with precision and flair for the close to 4,000 congregants gathered round a basketball court, sitting on plastic chairs, wooden benches and the ground. 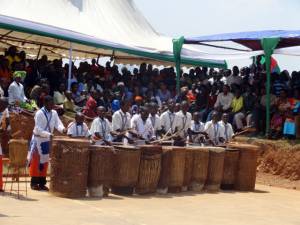 The rally had begun on Thursday with teachings in the mornings as the faithful crowded into the local Presbyterian church on the opposite hill from the rally site. Teachings included spiritual and practical matters, from discipleship-making techniques to money-making projects for a congregation to become self-supporting. From there the participants hiked across the valley to the hilltop hospital and school, the site of one of the first mission stations of the church, where lunch was served at three different locales, and then the crowd moved to the basketball court, which had been converted into a rally site, with a platform for speakers and tents and chairs and benches for the comfort of the participants. A powerful sound system had been installed so the neighboring residents of hill and valley could hear and come. Over the four days of the rally the numbers grew steadily to the Sunday climax. The afternoon/evening rallies included singing and dancing in praise to God, choirs from various churches, a visiting choir from neighboring DR Congo, and preaching, followed by altar calls and prayers for the sick. The singing and dancing went late into the night. The joy of praising increased by the hour. Nights were spent in guesthouses, in church members’ homes, in school dorms, on mats on floors in classrooms, anywhere a resting place could be found. This “camping out” was half the fun of the rally—old friendships renewed and new ones begun, to widen the circle of the church. Participants had come from all sectors of the country, from all presbyteries of the church. This was a national rally. 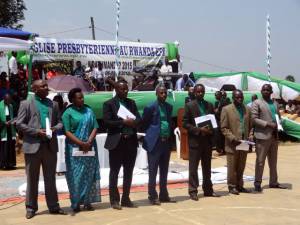 Sunday was the high point. It was a more formal worship service, the center of which was the ordination of the new pastors. These six men and one woman had their bachelor’s degrees in theology, and they had two years of internship in local churches, under the supervision of presbytery presidents. They were ready to make their formal commitment to the church and to God. They had been seated, scattered among the congregation. After a powerful sermon on Matt 28:19-20, the theme of the rally, the presbytery presidents were instructed to “search for men and women who could go and make disciples.” They gathered them from among the people, symbolic of their calling from among the church. The ordinands stood in the center of the rally, along with their spouses. The drums led the ovation as each candidate promised to faithfully serve. Then they were robed and joined the pastors in the congregation, becoming one of us. I was especially proud since these were the first of the students I had taught to be ordained. What a joy to see the fulfillment of their work and of your prayers for my students. You were a part of all of this because of your support for me and for the work here in Rwanda. Thank you, for myself and on behalf of my students. I encourage you to pray for them as they begin their formal ministry and to continue your prayers and support of me and the work here.

May God richly bless you in your ministries as well.