A Letter from Esther Wakeman, serving in Thailand

In a few days I will celebrate the 40th anniversary of the day I first arrived in Chiang Mai, Thailand. What an adventure it has been.

During the first 10 years, I taught English to high school students at Prince Royal’s College, and learned a lot about the English language, and Thailand, in the process. I also met my husband, Rob Collins, a widower with three children, married him, had twin sons, and moved out to a village, where Rob was pastor for two years. Those were the best of times and the worst of times. No screens on the windows, new northern Thai dialect to learn, realizing parenting was a huge challenge for me — but being blest with a whole village to help love my babies, and to teach me how. I also learned the northern Thai language, which has given me an open door into people’s hearts. Then we began commuting every year to Fuller Seminary in Pasadena, CA, for the school year, where I began graduate school, and Rob became a full-time parent and homemaker. During the summer we’d return to Chiang Mai and renew our connections here.

During the second 10 years, I completed the MDiv and a PhD in clinical psychology at Fuller and added a daughter to our family. We returned to Thailand full-time, and I provided pastoral care for pastors in our partner church, the Church of Christ in Thailand. I also had a mid-life crisis, which led to a period of deep healing, emotionally and spiritually. I experienced the reality of God’s presence with me and was able to feel the truth of God’s love and goodness, and my belovedness, in new and myriad ways. This began the adventure of trying to be an “apprentice to Jesus”— as Dallas Willard puts it — to walk with him, learn from him, grow to trust him more, and, I think, become a little more like him year by year. You’ll have to ask Rob about that one; and I’m well aware I’m still not very far along the path.

During the third 10 years, the president of Payap University, Dr. Boonthong Poocharoen, invited me to come on staff as chaplain and assistant to the president for religious affairs. After a year and a half in that role, I became a vice-president. One of my administrator colleagues actually commented to me one time that I was the administrator who didn’t know what she was doing — and in many ways, I think she was right. Culturally and psychologically, I was deeply challenged in my role, but I tried to depend on God for wisdom, learned a lot through experience, and formed relationships that have lasted to the present. Rob and I enjoyed dinner at our favorite Italian place last night with a colleague who has since retired, whom I was able to support and encourage during a very dark period of her life. I was a safe and confidential person with whom to share, in a culture where there are almost no secrets. There is a Thai phrase for friends who have stayed by our sides during difficult times, “difficult friend.” My friend calls me her “difficult friend.” I’m honored.

All of Rob's siblings visited us at New Year's — the day market was a fun adventure. 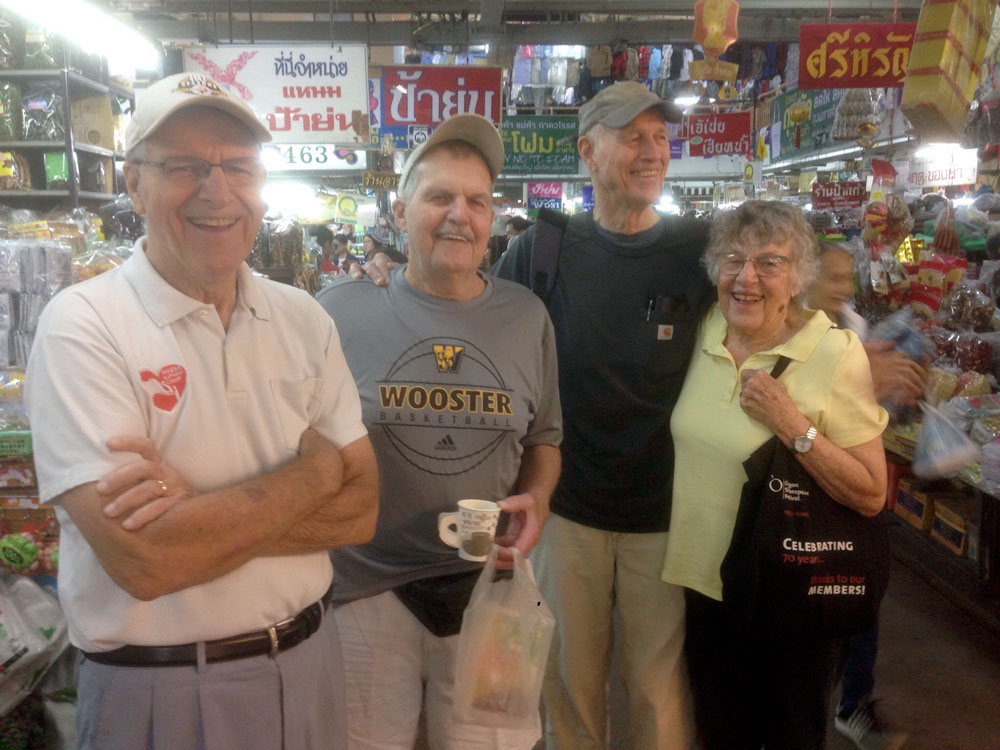 Image 1 of 3
During the past 10 years, I served under three more presidents, and became the person in the administrative cabinet who had been there the longest! I proposed five core values or principles for Payap University that are rooted in the Christian faith and developed a curriculum based on them that includes many of Steven Covey’s 7 Habits of Highly Effective People, many of which align well with Jesus’ teaching. Most of the time, in the workshops where students are learning these core principles they are given the opportunity to reflect on how the values apply to their own lives. For example, in exploring “Service through Vocation,” students ask their friends to help them think about what they are talented in — they have fun talking about that with each other. They also think about their passions, what makes them feel really alive. They consider their personal core values, and they think about what needs or groups in the world they feel a special concern for. The answers to these questions help them consider how they might use their talents, passions, and values to meet the needs they care most about. And I ask them to also consider the possibility that God designed them to do good works. God planned for them from the beginning (see Ephesians 2:10) and gave them the talents and passions they have so that they will find great fulfillment in doing the work for which God made them. This is “Service through Vocation” — serving where God calls us and fits us for the work.

As I reflect on the past 40 years, my heart is full of gratitude for the amazing adventure in which Jesus has called me to join him. He gave me talents — language ability, listening skills, learning and teaching abilities. He also gave me passions: I always liked riding motorbikes and driving a bit adventurously, being a sounding board who helps people hear their own hearts and serving as a facilitator to help them connect their hearts to God’s. I love academics, the teachers and thinkers. And I love college students — so full of life, growing into adulthood, learning greater responsibility, and being launched into the world to create the history of their generation. I’m grateful for the opportunity to serve in this vocation. And I am deeply thankful for so many of you who have helped support this journey with your friendship, prayers, and financial gifts, whether over many years or few.

I’m not planning an end to this adventure yet. My administrative responsibilities ended almost two years ago, and that has afforded more time for the one-on-one discipling relationships and conversations that I love the most. Payap plans to put more energy into our international programs, and I’m having more opportunity to counsel students and staff in those programs. I’m also still teaching Pastoral Care and Counseling in the McGilvary College of Divinity. We will be adding a counseling emphasis to our MA in theology over the next few years, and I’m glad to have been asked to coordinate that project and to develop short courses for church leaders in pastoral counseling.

Thank you for your interest and continued support. Please continue to pray for Payap University. All universities in Thailand are competing for fewer and fewer students due to effective family planning. Please pray for wisdom and courage for our leaders, and that God will continue to bring the students to us whom he has prepared to hear about his love.