Make A Donation Click Here >
Home › What We Do › Where We Work › Co-workers › Bridge-Building, Mediating, Reconciling

There is so much division in our world now—among people groups, among political parties, among school friends, and even among church believers. I have been convicted again by the Apostle Paul’s challenge to the church at Corinth:

“So if anyone is in Christ, there is a new creation: everything old has passed away; see, everything has become new! All this is from God, who reconciled us to himself through Christ, and has given us the ministry of reconciliation; that is, in Christ God was reconciling the world to himself, not counting their trespasses against them, and entrusting the message of reconciliation to us” (2 Corinthians 5:17-19).

My role in 2016 has been one of bridge-builder, mediator and reconciler. It began in February with a trip to China to help establish a strong partnership among seminaries in Jiangsu Province and Shandong Province in China and Louisville Presbyterian Theological Seminary (LPTS) in the U.S., with Presbyterian University and Theological Seminary (PUTS) in Seoul, South Korea. It was a pleasure to travel with longtime friend and mission colleague Jeff Ritchie, whom I met at LPTS in 1984. After this initial trip the bridge-building began. The General Secretary of Shandong Church Council, Rev. Gao Ming, visited Seoul with a group in September and I met with them in order to make connections with seminaries and churches in Korea. I also had the privilege of visiting Jiangsu Province again in October with a group from University Place Presbyterian Church in the U.S.A., and introduced them to Dushu Lake Church there. The two congregations have decided to form a sisterhood and will continue to engage with each other. I especially enjoy the work of bridge-building between congregations across divides of language and culture.

In May I had the opportunity to share at the Forum for Reconciliation in East Asia about my experiences in North Korea, especially about the Korea Christian Federation (KCF) in Pyongyang. The KCF has been a global mission partner of the PC(USA) since 1978 when Rev. Dr. Syngman Rhee, a Presbyterian minister, visited there. Christians in the U.S.A. and South Korea ended up collaborating to support the building of two churches, Bongsoo Church and Chilgol Church, as well as the Bongsoo Bread Factory in Pyongyang. I shared with the participants how we as Christians can still reconcile with North Korea, even though tensions are high, and there are currently confrontations on the Korea peninsula. Chris Rice, representative for Northeast Asia of the Mennonite Central Committee, had invited me to speak at the Forum. Chris also serves with the Peace Reconciliation Network for North Korea, which meets twice a year (February and August) in our Korea Mission office of the PC(USA) in Seoul, where seven organizations have shared information and knowledge about how to work together to support humanitarian aid to North Korea.

I have visited North Korea at least twice a year for four years now, even during periods of high tension on the Korean peninsula. Communications are at a deadlock between the two countries now, so I have become a mediator in order to channel messages among the churches in South Korea and KCF in Pyongyang. In September North Korea was hit by a very strong storm that resulted in the worst flooding in 60 years. The northern part of North Korea suffered more than 500 deaths, and the storm destroyed more than 50,000 houses. We sent humanitarian aid to the area and flour to Bongsoo Bread Factory during my October mission trip to the region. Without agape, unconditional love from Jesus Christ, we cannot support North Korea. So I carry that love in my heart and share it with people in North Korea unconditionally. Please pray for me, that I will have courage to carry this love to them in any circumstance. 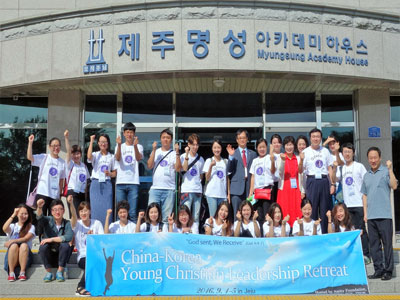 In September of this year we held our first China-Korea Young Christian Leadership Retreat on Jeju Island in South Korea. We needed lots of patience and care in order to hold it. We invited 15 young adults from China through the Amity Foundation and 15 participants from South Korea through our two partner churches, Presbyterian Church of Korea and Presbyterian Church in the Republic of Korea. Our major goal was to train the next generation of young leaders and provide networks for them. The retreat grew out of the successful China-Korea Intercultural Exchange Program in 2015. 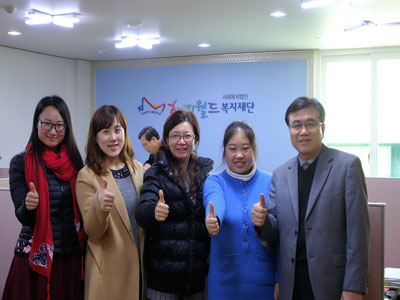 With Chen Ting, first from the left, at the Social Service Center in Seoul

Even though the two programs were in the beginning stages, we could identify the fruit of participants’ growth. For example, as a young adult from Nanjing, Chen Ting participated in both programs. Through the three months of the exchange program in Korea, Ting experienced the various churches and denominations in Seoul, learning about the social services of the church, and the necessity of reconciliation and peace in Korea. When she returned to China after the program she traveled to North Korea through a travel agency in order to experience the life of North Korea. Then Ting came back to South Korea to participate in the China-Korea Young Christian Leadership Retreat in September. During the retreat she was able to meet young Christians from various places in China and South Korea and had deep discussions about how the Korean and Chinese churches should work together in the future. Now she is currently in the process of entering the Master of Christian Education degree program at the Presbyterian University and Theological Seminary (PUTS) in Seoul, South Korea (I wrote a recommendation letter for her). She will begin classes in March of next year. As we witness her growth through the two programs and consider her future direction we expect that these programs will play a significant role in bringing new leaders to work for reconciliation and peace between the two countries in Korea and China and beyond. She will be a Chinese Christian leader—Christ’s ambassador—carrying the ministry of reconciliation. Let us continue to pray for her.

Yen Hee and I deeply thank you for your faithful and unshakable prayers and support over more than 20 years. We humbly ask you to continue with us. We look forward to experiencing many more years of collaborative reconciliation with you in God’s mission for the Kingdom of God.

As we celebrate together the birth of Jesus who is our Savior and Immanuel, may God richly bless you and give you vision, power, and courage for God’s glory. Amen.