Register for the next Matthew 25 Online Event – Eradicating Systemic Poverty: Global Issues
Make A Donation Click Here >
Home › What We Do › Where We Work › Co-workers › At Play and At Work

A Letter from Cathy Chang and Juan Lopez, serving in the Philippines

Congregations: Give to D507588 for Cathy Chang and Juan Lopez’ sending and support

Merry Christmas! The official build-up to Christmas has already begun, amidst full days of play, school and work for our family. Christmas season in the Philippines starts in September, and we are in full swing for the next four months. The second quarter has nearly concluded at our daughter Aurélie’s elementary school, since June is the start of the school year. She started Tae Kwon Do in July and already completed the white belt level. She plays almost every day of the week with her good friend across the street. Aurélie enjoys Sunday school and, like her father, loves playing board games. When we have free time, we play at board game cafés.

The rainy season will end soon, and thankfully we didn’t suffer as much this year, with school cancelled only a few times. The tropical storms passed by other coasts not close to us. In early July, Juan participated in awareness training for natural disasters and prepared our house and family with survival tactics and backpacks. Survival skills are a major concern for most people. Talking with the neighbors reminds us of the constant threats upon Filipino lives. When the earth shook in August as a result of earthquakes to the south of the Luzon, some people were moved to tears by fear and recurring trauma. Some devastating earthquakes have happened in the Philippines in the past 20 years.

While Juan and Aurélie have their routines of school and play in which I (Cathy) participate when I can, I worked and traveled intensively in August, September and October. August was filled with writing: adapting the sexual education curriculum for adults in the United Church of Christ in the Philippines (UCCP); drafting project proposals for international partners; and writing the “Horizons” November/December feature article. I also had many learning and teaching opportunities. At the Silliman University Divinity School Church Worker Convocation, I challenged nearly 300 church workers to re-examine the impact of social media on their ministries, their relationships with God and one another. At a Train the Trainer event, I served as both student and teacher alongside UCCP church leaders learning how to teach a sexual education curriculum to church members. Healthy perspectives on sex and sexuality begin with whole selves and whole relationships, and I believe this curriculum can support the prevention of sex trafficking.

September and October afforded opportunities to develop regional friendships and identify potential partners throughout Asia. In September, I joined the Presbyterian Women (PW) Global Exchange in Indonesia, where I met many Christian sisters and learned how they build bridges of understanding in their multi-faith world. October brought a short but full stay in Yangon, Myanmar, where I participated in a consultation about forced migration and labor trafficking.

In the face of an ever-increasing workload, the sustaining forces of play and self-care often get neglected. We know that play is a gift from God and if we are to continue addressing injustices associated with armed conflict, forced migration and human trafficking, we must embrace it. This is a constant lesson, learned not only from our family but also from our new friends throughout the region.

As an introvert, I would prefer to retire to my room at the end of a full day, but when I have played with friends, my energies are restored. Lingering to enjoy a few more laughs at the end of a meeting with church leaders can also help us enjoy the day and our joint work. It’s helpful to laugh and remember the joy of bringing hope and life to otherwise challenging situations. In some moments, I have discovered the wonders of play. During the recent PW Global Exchange, each women’s meeting often concluded with singing and dancing with moves similar to the “Electric Slide.” A belated birthday celebration, views of the moonlight, a visit to a world-famous Buddhist temple and religious jokes eased the tension from a full day of presentations about forced migration and labor trafficking.

The concerns of interreligious and armed conflicts are the on the minds and hearts of most Filipinos. Due to the situation in Marawi, the country is very tense. Since the Battle of Marawi started on May 23, 2017, the region of Mindanao has been under martial law. There has been incessant fighting between the Maute group, Abu Sayaf and the Filipino army.

The Lumads (meaning “natives” in Cebuano) and the Moros (Muslim natives called Moors in Spanish colonial times) were the first victims of the siege. They have been abused by both sides, are displaced and face a humanitarian crisis. The refugee centers are overwhelmed, with many dying of disease due to the lack of resources. The groups lost their livelihoods and homes and have been living in refuge centers since the siege began. Martial law in Mindanao has brought bombing and discrimination, compounding the groups’ vulnerability. Some schools for the Lumads have been bombed or closed for fear that they might hide rebels or spread anti-government propaganda.

In response to this Marawi situation, Juan and Aurélie attended the first “Save our School” national conference at Diliman University of the Philippines. The goals of this gathering were to promote keeping the school open and protecting it. Sadly, martial law has disrupted students’ right to learn. Since the beginning of the Marawi crisis, many Lumad school students have sought refuge on the UP Diliman campus. Many organizations have been working to address students’ struggles.

As a family, we have combined work and play to raise awareness of the Marawi situation and to advocate for vulnerable groups. Dubbed “Gamers for Good” on our fundraising T-shirts, we participated in an event at one of our favorite board game cafés. Some seek to extend direct assistance to evacuation centers. Donations are always welcome, but require caution. For example, we learned that it is taboo for Lumads to reproduce human beings in dolls or toys, so many donations needed to be returned. In addition, some well-meaning but culturally-unaware groups hid Bibles in donation packages for the Moro groups (Muslims), creating even more discrimination and harassment.

Update on the Marawi siege: All but one of the hostages from Dansalan College have been freed. Two of the main leaders were killed in an attack carried out by the Philippine army. While these realities might indicate victory, the ongoing work of rebuilding the region and addressing the roots of this conflict remains. Martial law is in effect until the end of 2017. Please pray for this region, its leaders and the children, and for government leaders who must rebuild communities and reestablish trust and cooperation.

We remain grateful for your prayers for the ever-growing network of churches, migrant-serving organizations, and church leaders throughout Asia, as well as for our family, especially as we attempt to achieve the balance between work and play. We are thankful that God that has brought us together to partner in mission service, sustained by your love, support and financial gifts throughout our first term that will conclude in 2019. Please consider adding your support through financial gifts. Looking ahead to June-September 2018, we are planning to visit the U.S. to speak to churches. If you are interested in hosting us for a visit, please contact us at cathy.chang@pcusa.org.

Aurélie learns about Manuel Quezon on a field trip. 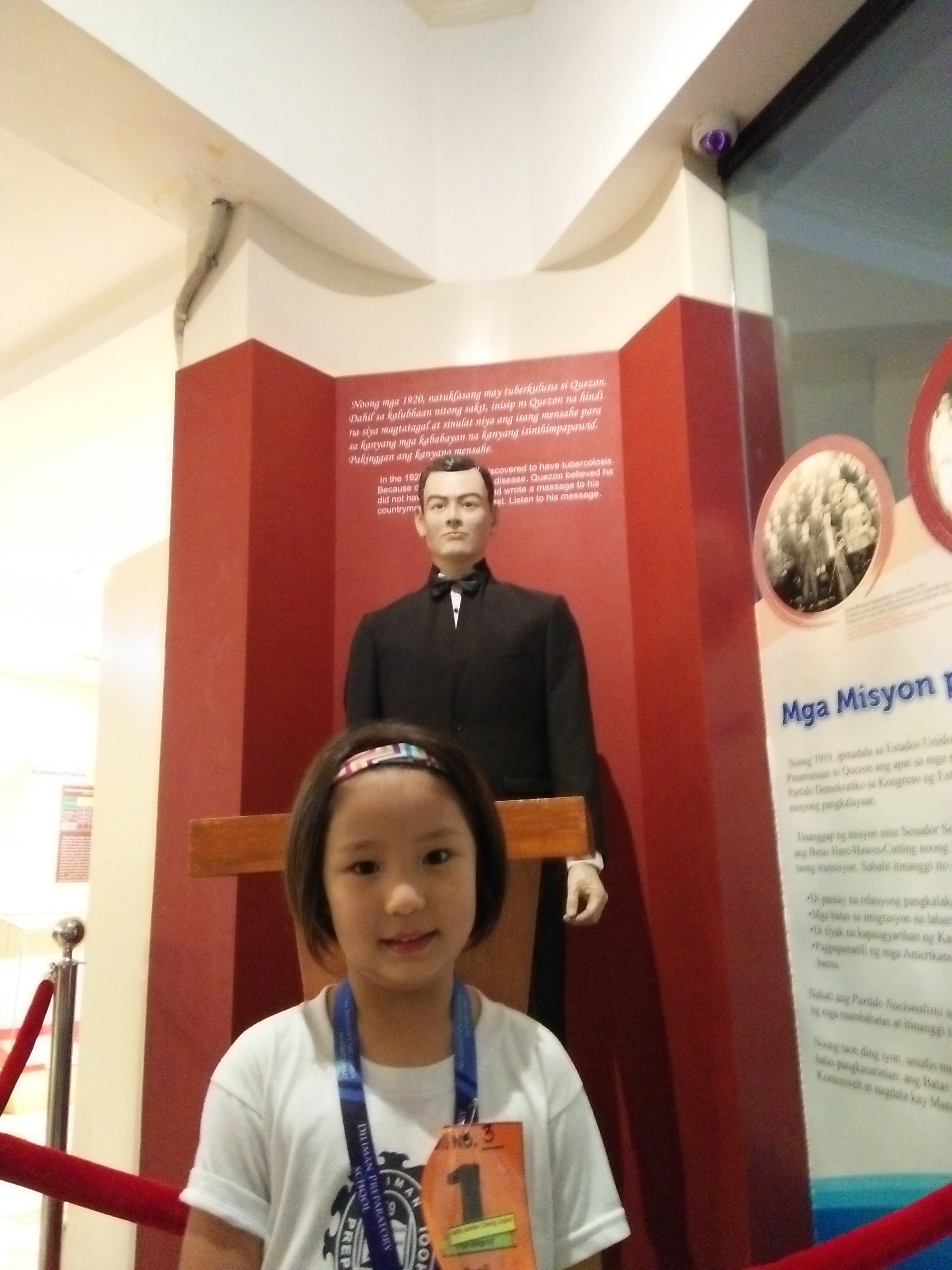