As a young Korean American I studied at Louisville Presbyterian Theological Seminary (LPTS). While I was studying there as a freshman I met Jeff Ritchie, who was doing a sabbatical year at the furlough home as a PC(USA) missionary to Korea. Jeff approached me to have a conversation so that he could practice the Korean language. Since we have the same birth year and have a common ground for God’s mission, we became friends naturally. A year later he went back to his mission work in Korea, but I didn’t know that this encounter would begin a long journey together for God’s mission.

Providentially I went to Korea as an exchange student in 1985 because LPTS established a sisterhood with the Presbyterian University and Theological Seminary (PUTS) in Seoul. I was the first student from LPTS to go to PUTS since the exchange program began. As I arrived at PUTS I called Jeff to let him know of my presence in Seoul. Later he asked me to go on a mission trip to an island off of Korea during summer break. This offer affected not only my future work, but also my faith in God. He offered me an opportunity to preach at a small church in Mo-do Island, in the southern part of Korea, but at that time I had not taken any courses in preaching nor had any preaching experience. With ceaseless prayers and preparation I delivered a sermon at the church. After the worship service a woman shouted out, saying she had been healed by my preaching and asked me to pray for her by laying my hands on her. I had not done it before, but relying on God completely, I prayed. After her, all the members of the congregation asked me to pray for them.

Among about 50 members there were three young adults. One young man who managed a generator for electricity, another young man who had just finished his military duty and was working on his father’s seaweed farm, and a young woman whose parents owned a restaurant on the mainland. Their prayer requests were like this: the two young men wanted to be pastors and the young woman wanted to be a minister’s wife.

After the prayers I went to the evangelist’s house. As I went into his room he suddenly kneeled down and asked me to pray for him. His request was to go to a seminary (he had graduated from a Bible school) and become a pastor. Also another request was to get married. Anyway, I prayed with all my heart even though there were some doubts in my mind because of his situation and appearance. He wore heavy eyeglasses due to an injury from an accident that took the eyesight from his left eye completely, and with the right he could barely see. His face had some scars, too. 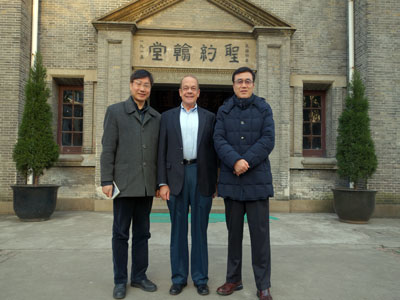 With Jeff at St. John, established in Jiangsoo Province, China, in 1915

After I finished all the courses at PUST in Korea, I went back and graduated from LPTS. Years passed, and eventually my wife, Yen Hee, and I were invited to serve as PC(USA) mission co-workers in Korea. We began our service with our church partner, the Presbyterian Church of Korea (PCK). Only later did I find out that Jeff Ritchie had recommended me when the PCK was looking for a mission co-worker partnership! After we came to Korea as mission co-workers in 1991 the president of Honam Theological University and Seminary (HTUS) asked me to teach Clinical Pastoral Education (CPE). So I taught it once a week at HTUS for five years. One day after I finished the class, a pastoral student asked me whether or not I remembered Ok-rim Lee from Mo-do Island. She was the young woman I’d met and prayed for. He told me that she was his wife. Later he became an associate pastor of the Island Medical Mission. I asked him if he knew anything about the two young men I had met on the island. He told me that one graduated from HTUS and the other one graduated from Holiness Church Seminary.

Concerning the Mo-do Church’s evangelist… One day I was invited as a lecturer for a pastors’ Continuing Education Seminar near Kwangju. Entering the place, I heard someone calling my name with a loud voice. I turned and saw a man wearing heavy eyeglasses running toward me, showing me his name tag. It was Rev. Sung-nam Chen, who had indeed become a pastor. He also told me he was married and has two children. While rejoicing with him I also silently confessed my little faith to God. 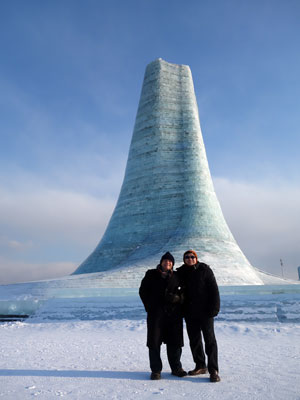 With Jeff at Harbin, China

Through these experiences my faith has built up to completely relying on God. I truly believe God can do all things through Christ who gives us strength, and I have practiced this in my life. Now I have been a mission co-worker more than 25 years. I don’t fear to deliver sermons in any circumstance or environment. Also I believe the power of prayers and do practice it in English, Mandarin, and Korean, even though my skill in these language is poor. I am so happy that I met Jeff Ritchie all those years ago, and that through our encounter and engagement, and with God’s help, my faith has grown. From the bottom of my heart, I deeply thank him for his steadfast friendship and his unshaking love toward me and God. I also deeply thank you who have supported our ministry more than 25 years with steadfast and unshaking love and care.

As Yen Hee and I continue in service to God and to the Presbyterian Church of Korea, as well as with our partners in China, Taiwan, and Japan, I invite you to continue on this journey with us with your prayers, your correspondence and your financial support. Through God, all things are possible.