A Letter from Burkhard Paetzold, serving as regional liaison for Central and Western Europe and Facilitator of work with the Roma people, based in Germany

Individuals: Give online to E200392 for Burkhard Paetzold’s sending and support

Congregations: Give to D506900 for Burkhard Paetzold’s sending and support

There were sheepherders camping in the neighborhood. They had set night watches over their sheep. Suddenly, God’s angel stood among them and God’s glory blazed around them. They were terrified. The angel said, “Don’t be afraid. I’m here to announce a great and joyful event that is meant for everybody, worldwide …” (Luke 2:8 -10, The Message)

“God’s kingdom is like yeast that a woman works into the dough for dozens of loaves of barley bread—and waits while the dough rises.” (Matthew 13, 33, The Message)

Dear friends,
When I was a child in East Germany in the 1950s, oranges were hard to get. This was still the case when we had our own small children in the 1970s and 1980s. But in all those years one of the special things about Christmas was that we were able to buy oranges! We labeled them “Christmas quota oranges” and they came from Cuba. We rather loved them for their juicy sweetness even though they had a leathery surface and chewy flesh inside. And we learned later those oranges were originally a variety not meant for eating, but for juice production.

I always think of those chewy leathery oranges when I think of Christmas before the Wall came down. This year we celebrated the 30th anniversary of the fall of the Wall. At the same time we have also celebrated thirty years of being able to get wonderful oranges not only at Christmas but almost all year round — just as we now can get so many other foods from global markets.

It is both interesting and sad that our way of enjoying our Christmas in the Global North depends in part on our many advantages in global trade at the same time when we ignore global trade issues. There is coffee, chocolate, dates, figs, exotic nuts, and the list goes on. Going back even further into my childhood, I remember how, nine or ten years after the end of World War II, you could still see the inscription Kolonialwaren ,“colonial merchandise” on some older shops.

In October this year I started to think again about oranges and “colonial merchandise” in a very different way. 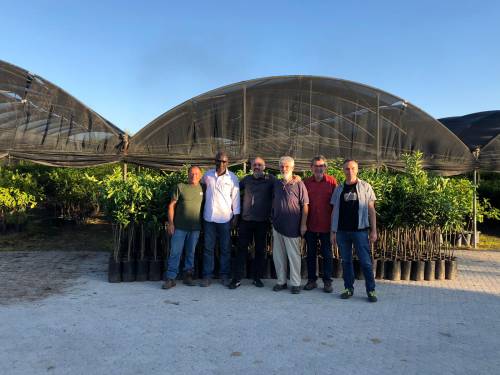 Luciano and Burkhard meet with friends from Mediterranean Hope and local gardeners in an orange tree nursery that supports an organic and fair-trade orange project in Calabria, Italy.

What happened is that in October I visited Calabria in southern Italy with my PC(USA) Area Coordinator, Luciano Kovacs. In Calabria, we visited a project of Mediterranean Hope (MH). I think I have already told you about this amazing program of the Federation of Protestant Churches in Italy (FCEI) that supports migrants and refugees.

In 2017, I first became aware of their work on the Italian island of Lampedusa where Christian activists walk alongside newly arriving boat people or, sadly, sometimes help bury the boat people who have drowned. On Lampedusa, I also learned about Humanitarian Corridors, a program of the Italian churches which has already brought over 2,000 vulnerable refugees to Italy on a legal pathway without them having to pay a fortune to smugglers or having to risk their lives. In the two years since I visited this ministry on Lampedusa, I saw how Humanitarian Corridors has influenced other European churches to start their own program, and has just launched a Europe-wide initiative to extend its influence even further.

When I visited Calabria, I learned that Calabria is very different from the touristy, glamorous and history-laden Italian cities in the north of Italy. In that region, a majority of locals face a fairly desperate economic situation, and in Calabria, migrants are exploited in a way that looks a lot like slave labor.

In an attempt to address all the facets of migration, Mediterranean Hope has recently started a project to support migrant laborers picking oranges in the Calabrian countryside. Many of them come from Africa and are exploited by local farmers. However, most of the local farmers are facing a desperate economic situation themselves, partly because they depend on multinational corporations and mafia cartels to buy their oranges. Unfortunately, the farmers end up passing on the economic pressure they suffer by reducing the wages they pay to their migrant laborers — people who are the weakest of the weak.

Returning home, I noticed that, among the big corporations that ultimately buy these oranges, are the same German supermarket chains that I sometimes shop at. So, you understand, I now see my Christmas oranges with very different eyes.

Our friends from Mediterranean Hope showed us the makeshift houses of the migrant workers. They live in dilapidated refugee camps without running water or toilets. Some of them do not have legal status in Europe and so just sleep out in the forest, hoping no one will find them. We learned about accidents that happen when migrant workers have to ride their bikes for long hours, in the dark, on narrow roads to get to work or return from work to their huts and tents.

Mediterranean Hope has joined hands with a local non-profit organization named SOS Rosarno that works with small cooperatives which grow organic oranges and pay their employees (90 percent of whom are migrant laborers) a living wage. The churches help to connect them to shops in other parts of Italy where customers want to be in solidarity with the migrant workers. (It’s interesting that the prices for oranges in those shops are not much higher than in major supermarkets.)

Mediterranean Hope is also working with local elected officials in this poverty-stricken region who fight against exploitation as well as against xenophobia, racism and economic injustice.

Can I ever enjoy oranges or orange juice from my supermarket again when I think of the exploited laborers I met? Don’t I have to challenge or perhaps even refuse to buy from those big food chains? Isn’t a role of our ecumenical movement to raise awareness about the plight of those who produce and harvest the oranges as well as of those who consume them?

Of course, what I have just said is relevant not only for our oranges, but also for our coffee, and tea, and chocolate, and many of the goodies we enjoy at our Christmas table.

Isn’t it God’s plan to invite everyone into his kingdom, including producers and consumers, all of humanity? Isn’t that what the angel meant who said: “Don’t be afraid. I’m here to announce a great and joyful event that is meant for everybody, worldwide …”?

And isn’t our role to put the yeast into the dough not only during the Christmas season but throughout the year?

So, I’m wondering, will you join me and drive the extra mile to shops where you can find fair-trade goods and pay the extra penny in places where you know the producers will get a fair wage — and tell this “good news” to your neighbors?

I can assure you the oranges and coffee and tea and everything else you buy will taste so much better when you help make Christmas a blessed and joyful season for everybody, worldwide …

You will enjoy your Christmas as our family did in East Germany when oranges, even our leathery and chewy oranges, were something very special!

Peace and blessings to all of you,