Register today for the June 23 (2pm EDT) online Matthew 25 event that will look at hunger and food insecurities.
Make A Donation Click Here >
Home › What We Do › Where We Work › Co-workers › A Legend in Her Own Time

A letter from Judy Chan serving in Hong Kong

A Legend in Her Own Time

That’s what veteran missionary Doris Caldwell Rhoades said when asked if she would go work in Hong Kong in 1957. Doris had been appointed as a mission worker to China in 1947 by the Presbyterian Church. She completed her language study in Mandarin and began her ministry in the rural province of Soochow at the Church Workers’ Training Center. She was forced to return to the U.S. in 1951 after the Communist Party came to power and all foreign missionaries were expelled.

Then the opportunity arose to use her training as a social worker to serve Chinese refugees who had fled over the border to Hong Kong. Indeed, the city had been a British colony since 1841, but Doris saw the chance to serve needy people who wanted to return to China as much as she did. Despite her anti-colonial sentiments, she agreed to go for one or two years—and ended up staying for 26 years as Director of the Christian Family Service Centre. She retired back to the U.S. in 1984.

I met Doris and her husband briefly in Hong Kong in 2004. They had been invited to the 50th anniversary celebration of the Christian Family Service Centre and stopped by to visit the Hong Kong Christian Council. This spring I heard that Doris had passed away on March 19 at Pilgrim Place (Claremont, Calif.) at the age of 97. 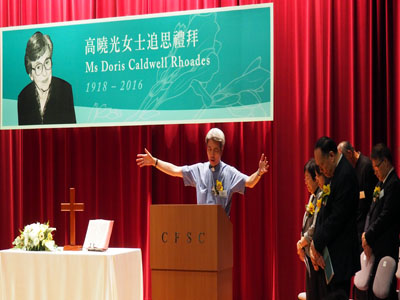 A memorial service was held in Hong Kong in early May in the auditorium of the Christian Family Service Centre now located in Kwun Tong. Sitting next to some of her dear friends, both Chinese and American, I was deeply impressed to hear more about her life and service to Hong Kong and to God. When she took over the work from the founder, Presbyterian missionary Muriel Boone, the Centre was still small and new. Over the next quarter century social services expanded to meet the demands of thousands upon thousands of refugees and poor residents. That foundation laid by Presbyterian missionaries lives on in the Christian Family Service Centre, which is now a well-developed multi-service agency reaching out to manifest the love of God to families and people in need (http://www.cfsc.org.hk/). 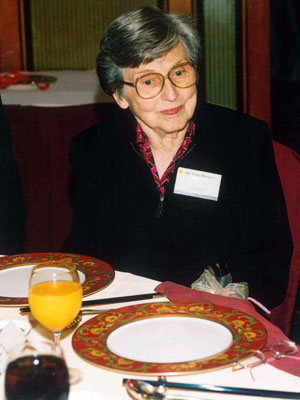 I give thanks to God for the life of Doris Caldwell Rhoades and all those outstanding Presbyterian missionaries who have come before me. I did want to work in a colony when I arrived here in 1994. With God’s grace, I pray that I may serve the church and people of Hong Kong, China with as much devotion, commitment and love as Doris did in this colony that has returned to the motherland since 1997. Thank you, Doris. You will always be remembered and honored in China through the many lives you touched for the glory of God!

Our challenges in mission are different, but the task remains the same—to witness to God’s peace, justice and compassion through the cross of our Savior Jesus Christ. I give thanks to God for all of you who continue to support my ministry through Presbyterian World Mission. Your prayers, your words of encouragement, and your financial support allow me to continue meeting the challenges our Chinese brothers and sisters face.