A Letter from Michael and Rachel Ludwig, serving in Niger

Sa’idou had just left his sandy field all prepared for the rains and planting season, and was walking down the hot, sandy road into the village where he had been sent by our partner church to be an ambassador for the gospel. He almost stopped with surprise when he saw two big cars parked outside the woven millet-stalk walls around his house, because they rarely have cars visit this deep in the “bush” of Niger. When he entered his house, he found that the cars had brought some nurses from the capital to do a health survey of the nearby villages. They were waiting with a small crowd of people to question him about how it happened that his house was the cleanest and had the best health practices in the village.

As you might have guessed, Sa’idou is one of the 30 pastors we helped our partners in the Evangelical Church in the Republic of Niger (EERN) train during a week-long Community Health Evangelism (CHE) training this past spring. He also happens to be the one who brought his wife along to the training, to help get their whole family oriented toward this new way of reaching out to their community, which they could see would bring not only spiritual but also much-needed physical blessings to their community.

A typical sandy road into a village, with children playing creatively. 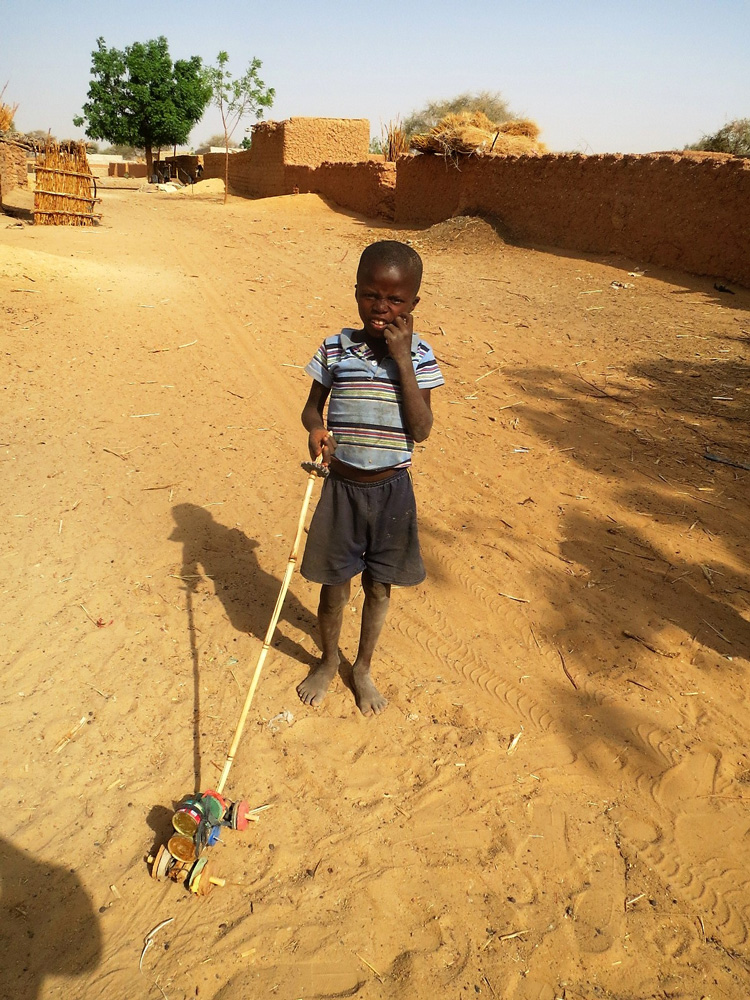 Sa’idou explained to the nurses about how he’d gone through CHE training with his church and how he felt it was important to share what he learned with his neighbors. Then his neighbors had been interested in learning the things that would help their families avoid sickness. Things like how to make handwashing more reasonable with the small amount of water they carry from the well every day by using a handwashing station that uses a tiny amount of water, built out of a reused bottle and string. Or things like the health benefits of picking up garbage around their compounds and the emergency signs for at-risk pregnant women. The chief of the village beamed as the nurses congratulated Sa’idou and added that this village was the healthiest in the area. They could see that it has so many healthy-rated households because of what he had been doing to help people.

In a place like Niger, where the population is 97% Muslim and Christians are often seen as outsiders to be treated with suspicion, this is amazing affirmation. In the next few days, Sa’idou had visits from two chiefs of neighboring villages who asked him to share his teachings in their communities. This is exactly the outcome we hope for, as it spreads life-giving teachings and opens up new relationships and chances to share the good news of God’s love with more neighbors. It reminds us of what Jesus tells his disciples in some of his last words to them in John 13: “Very truly, I tell you, whoever receives one whom I send receives me; and whoever receives me receives him who sent me… By this everyone will know that you are my disciples, if you have love for one another.”

We are very encouraged to see these kinds of developments in the work of our partner church and the communities that they impact. When we hear this good news, we want to send our thanks to you, our supporters! We remember that we could not be part of this growing work of community transformation without your participation in God’s sending and God’s bountiful sharing of blessings. So, thank you for your continued prayers for us and the people of Niger. And thank you for your continued financial gifts that allow us to work with our partners and maintain a healthy and growing family!

Many of you have expressed your care and concern for our family as we go through the stresses of adopting a second child from an orphanage in Niger. Again, we have been blessed with lots of help from our Nigerien co-workers and were able to finalize the adoption in only five months. Our new baby boy is 10 months old, and he has really started thriving in our house and bringing lots of joy. Through some routine doctors’ check-ups, we’ve discovered that he has hip dysplasia, which means he needs to wear a light brace to keep his hips in the right alignment. Hopefully, his hips will grow correctly with this help and he won’t have to wear the brace more than a year, since it will make things even more hot and sweaty in our environment. Please keep up your prayers for him, our family, and Sa’idou as he cares for his family and six new believers in his village.

In the end, we want to leave you with our thanks and the encouragement from Sa’idou’s story, so we may not grow weary in showing love to those near and far as a testimony to what it means to follow our savior, Jesus Christ.