Building a Life of Faith. Support the Pentecost Offering..
Make A Donation Click Here >
Home › What We Do › Where We Work › Co-workers › In Their Own Words

A letter from Dustin and Sherri Ellington, serving in Zambia
November 2017

Individuals: Give online to E200478 for Dustin and Sherri Ellington’s sending and support

Congregations: Give to D507543 for Dustin and Sherri Ellington’s sending and support

Greetings from Zambia. Being on a Southern Hemisphere schedule, we at Justo Mwale University are rapidly approaching the end of the school year. Eighteen of our students are finishing the main program, the Bachelor of Theology. At least 15 of them have congregations awaiting their arrival as pastors. I’ve had the chance to talk with four outstanding students about their hopes and fears as they move on, and I’d like to share their words with you. 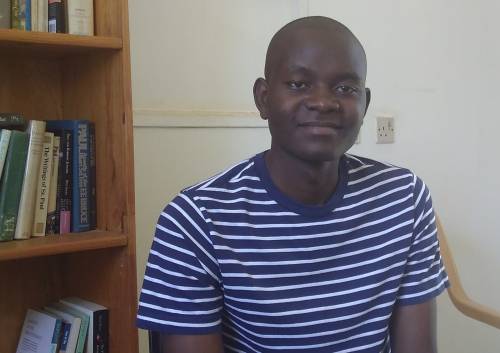 Watanga Ngoma in Dustin’s office, sharing hopes and concerns about his upcoming ministry.

Two of the four students I talked with have not previously pastored a congregation, and they are eager to start. Watanga Ngoma is the youngest graduate in his class. He says, “I am excited that I will be serving as an ordained minister at a congregation… I am happy that I will be in full-time service to the Lord, a thing which is upon my heart and which has been my desire. This brings joy to me that I will be more able now to contribute more to the church and body of Christ.” Miss Naele Mawere, also of Zambia, says, “What most excites me about being out of Justo Mwale is to practice what I have been learning for four years and become a minister.” 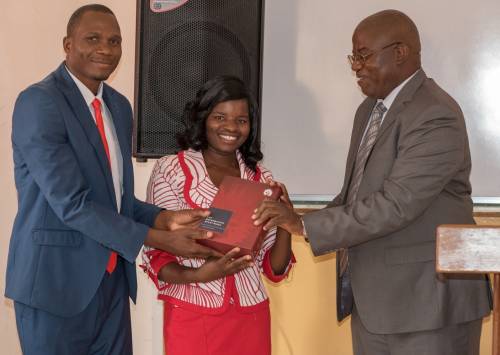 I also heard a common desire to be a pastor who has Christian character and leads an exemplary life. These students aim to play a role in reversing African society’s waning confidence in the church, after too many ministers have coaxed people to give sacrificially while promising the divine blessing of a big return on their money. People have also been disappointed as a result of scandals, and trust is low. Watanga says, “A number of people now don’t trust ministers …. Christ is not seen in the acts and instructions of [many] ministers.” He adds, “Some people might have been tricked or manipulated by a minister and that may be their general picture and view about all ministers.” He goes on: “I long to go and serve the Lord honestly and faithfully. I hope and pray that by God’s grace alone I will not be part of anything that may bring shame to God, myself, my family, and the ministry.” Moreover, “I hope to teach the truth, live an exemplary Christian life and continue following Christ as my Lord and savior…” Naele says, “My hope is to be a role model for the people in the congregation and in the society as well.” 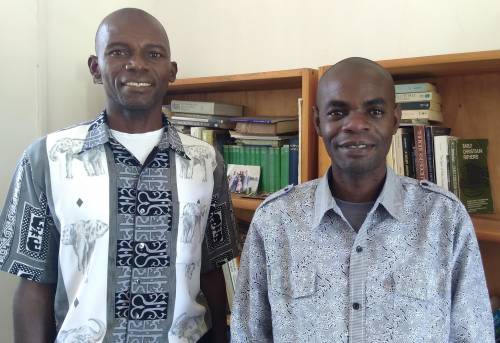 Rev. Feston Chilumpha and Rev. Gift Given Simwera will soon head back to serve churches in their homeland of Malawi.

All four of these students spoke of a hope to continue their studies. Naele said she will miss Justo Mwale in part because “I am a lover of the library so I will miss the library so much.” A difference between serving in Africa versus the United States is the general absence of books here. Public libraries, for the most part, don’t exist in the countries served by our students, and very few Africans can afford to buy books. Watanga said: “If an opportunity can come that I go and do my Masters degree, PhD or other studies that will enrich my understanding and growth academically and spiritually, I would really grasp that chance and opportunity.” He added, “I also (want to) support my wife and partner in ministry to continue studying further and together serve the Lord faithfully.” Rev. Feston Chilumpha, who is excited to go back to Malawi after living away from his family for three years, says, “It was a dream come true to fulfill the degree in theology, but I would love to continue studies if possible.”

As students finish and move on, they also have anxieties and concerns. Three of the four students told me that one of their biggest concerns (and prayer requests) is that they do not actually speak the language where they are being sent! Rev. Gift Given Simwera, who’s going back to Malawi, said: “My mother tongue is Ndali, but I’ll be serving among Ngoni people who speak the Tumbuka language. I need to learn their language and culture.” He adds, “Pray for me so that I should be able to know the language, adapt and contextualize God’s message in people’s lives without compromising it with their cultural values.” Watanga says, “I am a Ngoni by tribe and I speak Chewa, Nyanja, and a little Bemba. I can speak Nsenga also. But I am going to a Lenje-speaking place of which I have no idea of the language. Now as I don’t know the language of the people, it might be challenging to me.” Naele says, “A challenge that also brings fear is communication. The congregation is located in a Bemba place, and people communicate and understand each other well using Bemba, which I don’t know how to speak. So for effective communication I need to learn their language which will take time for me.” As all are serving in former British colonies, English will help, and African youth often prefer it. Our students do tend to pick up new African (Bantu family) languages quickly, but let’s pray for their progress as they will be deeply involved in language learning from day one.

Another major concern: basic provision. Naele explains that she is being sent to a mining town where many no longer have jobs: “Every congregation is supposed to take care of its minister … I am told a lot of its members don’t have work, which may pose a challenge when it comes to my upkeep.” Rev. Feston Chilumpha says that most ministers “scramble to be in towns and cities,” where they are paid far better. But he expects that next month he will learn he’s being sent to multiple rural village congregations in Malawi. He says, “There’s the … trouble obtaining necessities in the village. Like water. Sometimes one has to walk a number of kilometers for water.” He says people in villages “expect that the minister will have financial support for them, or … food if they are hungry, so this can be difficult financially.”

I should also mention that this is an important time in the lives of our students’ families. Naele plans to get married in December, and the wives of Watanga and Rev. Chilumpha expect to give birth very soon.

We also invite you to join us in praying for the final selection process of the next leader for Justo Mwale University. It takes a wise and godly person with high standards for both academics and ministry.

Also, please pray that God would guide the hearts of young people he may be prompting to apply for the PC(USA)’s Young Adult Volunteer Program in Zambia. If you know any young adults who might like to serve as a YAV for one year in Zambia or at one of the other 21 sites in the U.S. or around the world, they can find more information at pcusa.org/ministries/yav/. The application deadline for international placements is January 1. 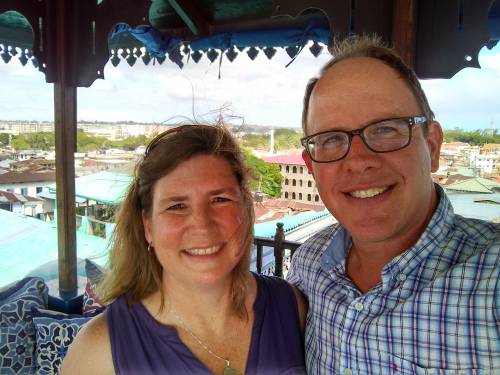 Finally, please consider an end-of-year gift toward our ministry through Presbyterian World Mission. You may give online by visiting our Mission Connections page: pcusa.org/dustin-and-sherri-ellington. Perhaps some of you may sense God’s nudge to sponsor a student scholarship at Justo Mwale University. If so, please be in touch.

To all of you who express support of us and our ministry in any way, we say a wholehearted thank you for the chance to be involved in ministry to such special followers of Jesus at Justo Mwale University.