Register today for the June 23 (2pm EDT) online Matthew 25 event that will look at hunger and food insecurities.
Make A Donation Click Here >
Home › What We Do › Where We Work › Co-workers › In the Lands of Asia

Asian churches are situated in lands that are historically multi-cultural and multi-religious. What do evangelism and mission mean in a context where Christians are often a tiny minority and viewed as part of a Western imperialistic faith?

This was the question presented to 40 participants at a Consultation on “Evangelism and Missional Witness in Multi-Religious Asia.” I was among them as the representative of the Hong Kong Christian Council. The Consultation, co-organized by the World Council of Churches (WCC) and the Christian Conference of Asia, was held in Thailand from November 29 – December 5, 2019. This meeting is part of an ongoing series that WCC is organizing in different regions around the world. 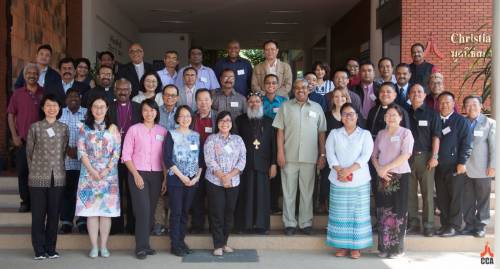 Besides listening to four keynote speakers, 21 participants were asked to prepare a short talk on evangelism and missional witness in their country or area context. You might think that 25 talks would be overwhelming. That was not the case. The presentations were fascinating and everyone stayed within their time limit. I was privileged to speak on the last day about the situation in Hong Kong. My talk focused on missional witness in an era of protests.

I was also asked to be on the Communique team to draft a summary of the meeting. This was challenging since the situations among Asian churches are so diverse. Nonetheless, we were finally able to put the thoughts together under three headings: (1) “Inherited Mission” and its challenges for Asia; (2) Contextual challenges of a Multi-religious Asia; and (3) Emerging Mission in Asia. You can read the Communique on the CCA website: http://cca.org.hk/home/wp-content/uploads/2019/12/Communique-Evangelism-final-formatted.pdf.

Here are some personal reflections and insights I had from the meeting:

1. Even though Christianity came to Hong Kong through British colonialism (1841-1997), the Christian faith is well-accepted by the society. The church’s mission outreach and influence is wide. This is mainly due to its legacy of church-sponsored schools, social services and hospitals. We are fortunate that, up to now, churches can run these institutions (with government funding) with Christian principles and identity, unlike in some other Asian countries.

2. Similar to other places where missionaries spread the Gospel, Hong Kong’s churches reflect the divisions and lack of unity in Protestant Christianity. There are over 70 denominations represented among 1,500 local churches. Even though Jesus prayed that “they may all be one” (John 17:21), it is evident that overseas mission boards (including American mission boards) were eager to make disciples under their own ecclesiastical brand.

3. Freedom of religion is a precious human right. Some governments in Asia claim that freedom of religion is guaranteed by law in their country. However, in reality, it is difficult, if not impossible in some places for a person to change or practice their religion freely. Christians in the region may face restrictions, discrimination, marginalization and even persecution. They are closer to the witness of the early Church than many of us have ever been. Asian Christians and other oppressed minorities need the prayers and support of the worldwide body of Christ.

4. Evangelism is not a bad word. Why then do some in the ecumenical movement regard it as an outdated concept that has no role in 21st century multi-cultural Asia? If someone wants to know “Who is Jesus Christ?” who else is going to tell them if not Christians? The models and methods of evangelism may change over time, but the call to preach the Gospel and make disciples is never out of date.

5. Likewise, if Christians are confident and firm in their faith, we should engage in interfaith dialogue and friendship as far as possible. In many contexts in Asia, the dominant religion is Buddhism, Hinduism or Islam. Christians have no choice but to be engaged with their neighbors. However, religious differences may be the source of serious social or political conflicts. May God guide us with wisdom and courage to build bridges wherever we can and to bring the light of Christ to shine on and bless the whole society.

In short, the Consultation was a stimulating and rich experience that I will always treasure. I have many new friends and a deeper sense of God’s wondrous grace in Asia. Thus, let me close with a prayer adapted from the liturgy used in our morning worship during the Consultation. These words sum up for me the spirit and heart that God desires for the church in Asia and the church in Hong Kong.

God of life, we remember your goodness and faithfulness to your people in Asia. You inspired the churches in Asia to affirm that we belong together and to live a shared life with a common evangelistic task. You challenged the Asian churches to serve together while being rooted in the common life of the people of Asia. You challenged us to participate in the struggles of the peoples of Asia for your promise of total liberation and fullness of life through Jesus Christ. You call us to actively participate in your mission to work for a just, participatory and sustainable society, reconciling people to God, to each other, and to your creation. May we be bearers of hope and builders of communities of peace through the gifts of plurality and diversity in the lands of Asia. Amen.

With all best wishes for a blessed Christmas and New Year,