John is periodically in the United States and available to speak to congregations as his schedule permits. Email him to extend an invitation to visit your congregation or organization.

John Etheredge serves with the Evangelical Presbyterian Church, Ghana assisting with the denomination’s efforts to address the root causes of systemic poverty in the nation. Working with the Nenyo Haborbor program, a project aimed at educating primary and middle school youth who have dropped out of formal schooling, John mentors and tutors children from lower-income families. John also supports skills-training programs at the Evangelical Presbyterian Activities Centre, which educates girls who have dropped out of school, mainly due to pregnancy. At the Shepherd’s Centre of Aging, a church-based social center that engages older adults who live alone in the community, John serves as an informal counselor and companion to the older adults who come to the center for nurture, care and social and faith activities.

Ghana has been called one of the friendliest countries in the world, owing to its “natural history, colorful festivals, historic sites and the hospitable people” (Forbes, 2011). The West African country has growing economic prosperity and a stable democratic political system. The population of Ghana is roughly 28 million, with 75% identifying as Christian and approximately 16% as Muslim. Five percent practice Traditional African Religion, and 4% identify with other or no faiths.

About 57% of Ghana’s population is age 25 or under, and the country and church are working hard to provide quality health, education and employment opportunities for this vibrant group of young people.

From his adolescence, John Etheredge has sensed the call of the Holy Spirit leading him to serve God and to serve the Church. Heeding God’s call, John has contributed extensively to the Presbyterian Church (U.S.A.) on the congregational, presbytery, national and international levels.

A ruling elder and lay pastor, John has served on the sessions of Mount Pisgah Presbyterian Church and First Presbyterian Church, both in Rocky Mount, North Carolina. He has also served two terms on New Hope Presbytery’s Committee on Preparation for Ministry and was New Hope Presbytery’s Commissioner to the General Assembly in 2010. In 2001, John joined New Hope Presbytery’s Committee on the Self Development of People (SDOP), a ministry uniting Presbyterians and ecumenical partners in “participating in the empowerment of economically poor, oppressed and disadvantaged people seeking to change the structures that perpetuate poverty, oppression and injustice.” In addition to being the moderator of New Hope’s SDOP and currently serving as its chair, John was elected to the PC(USA)’s national SDOP committee by the General Assembly in 2002. He served two terms on the national committee and was moderator and chair of the SDOP’s South Task Force Committee. Serving in this capacity in the South inevitably demanded confronting how structural racism and systemic poverty intertwine, a consideration that shapes Presbyterian World Mission’s conception of mission as partnership.

God had prepared John for his roles in the SDOP through calling him and his late wife, Anne, to take the bold step of facing race head-on in their congregational affiliation. In 2008, they were moved by the Holy Spirit to transfer their membership from the predominantly African American Mount Pisgah Presbyterian Church in Rocky Mount, a congregation of which they had been a part for over two decades, to the predominantly white First Presbyterian of Rocky Mount. It was only later that they came to discern the Holy Spirit’s purpose in leading them to take this bold step. John explains that they were called to join First Presbyterian to grow in their understanding of the dynamics of race in society and the Church, and to encourage their fellow congregants to do the same.

John’s philosophy of mission is encapsulated in John 21:16: “Take care of my sheep.” John views the verse’s injunction both as a call to serve others in Christ and a call to recognize how Christ sends others to nurture us. John has been fed by those he has encountered throughout his years of service to the church, and he is thankful for the sustenance he will receive from the PC(USA)’s international partners in Ghana.

John’s wife of 53 years, Anne, passed away in 2017. They are the parents of two grown children, Jonathan and Jessica. 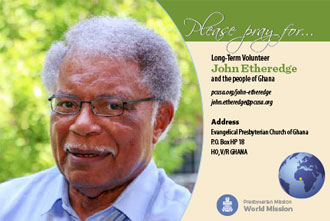 Jesus instructed us to feed and care for his sheep. My call is to care for those youth and adults in Ho, Ghana. The Evangelical…

Give to the ministry of John Etheredge