Hery is periodically in the United States and available to speak to congregations as his schedule permits. Email him to extend an invitation to visit your congregation or organization.

To learn more about Hery and his ministry, please send him an email at hery.ramambasoa@pcusa.org.

In his role as regional liaison for Southeast Asia and the Pacific, Hery facilitates and seeks to strengthen healthy, missiologically appropriate relationships among entities of the Presbyterian Church (U.S.A.) and those of partner denominations and organizations in the region. Hery also supports fellow PC(USA) mission personnel serving in Southeast Asia and the Pacific through communications, information sharing, guidance, encouragement and missiological reflection. Hery is based in the Fiji Islands, where he lives with his wife, Noro Rabefaniraka.

Southeast Asia includes Myanmar, Thailand, Cambodia, Laos, Singapore, Vietnam, Indonesia and the Philippines. The region is incredibly diverse ecologically, culturally, ethnically, linguistically and religiously. Christianity constitutes a small percentage of the population except in the Philippines, which is predominately Roman Catholic. Much of the region’s population is Buddhist, but Indonesia has more Muslims than any other country in the world.

The Presbyterian Church (U.S.A.) maintains partnerships with churches in every country in the region.

The seeds of Hery’s call to mission were sewn during his adolescence. Engaging with the ecumenical Student Christian Movement (SCM) during high school and university initiated him into working with vulnerable populations such as orphans, the homeless and victims of natural disasters. Passionate about creating a more just and equitable world, as a student he followed the Anti-Apartheid Movement and embraced the power of prophetic non-violence advocated by its Christian leaders. “They taught us,” he explains, “that a journey always starts with one step.”

A pivotal step in Hery’s journey was studying journalism and cross-cultural communication at Selly Oak Colleges in Birmingham, UK, a consortium of colleges that prepared students for ministry and mission service. His interest in journalism and communication was sparked in his boyhood as he watched the news with his family, which left him with many questions about the world. Hery states, “As an isolated individual, I felt powerless. But Bible studies and group Bible readings brought my fellow students and me to other dimensions.” He began to follow Karl Barth’s call for Christians to hold the “Bible in one hand, [and the] newspaper in the other.”

After graduation, Hery began working with the communication department of the Church of Jesus Christ in Madagascar (FJKM), one of the PC(USA)’s partner churches. Serving as managing editor of several FJKM publications took him to remote areas of Madagascar to cover community development issues, disaster relief and church planting. Being confronted with the realities of extreme poverty and the disregard for basic human rights strengthened his resolve to “give voice to communities trapped in poverty, ignorance and corruption.”

It was with this goal that Hery embarked on a series of positions in which he advocated for disenfranchised Malagasy communities. First, he joined the United States Agency for International Development (USAID), the United States Information Service, and the U.S. Foreign Service in Madagascar in rehabilitating Madagascar’s communication sector, which for over a decade had been stifled by Marxist governmental control. Later, he assisted the Malagasy government in evaluating the implementation of disaster relief and worked for national solidarity through projects promoting social welfare, gender parity and the preservation of Malagasy heritage. He was subsequently a diplomat in Germany, where he brought Madagascar’s concerns to the international stage.

The injustices Hery saw in Madagascar parallel those he encounters in Southeast Asia. Though the challenges of economic disparities, rampant poverty and climate change are daunting, Hery views them as opportunities for the Church and larger community to work together to “identify, reinforce and multiply projects that promote mutual understanding.” He has faith that “through the light of partnership and mission, the Church will continue to fulfill its prophetic role for justice and reconciliation among people and the whole of creation.”

Throughout his career, Hery has remained active in the FJKM. He became an elder in 1992 and was elected as an officer by the General Assembly in 2004. He has also served on several FJKM commissions, including Mission & Evangelism, National Affairs and the Development Department, many of these in partnership with the PC(USA).

Watch a video of Hery Ramambasoa 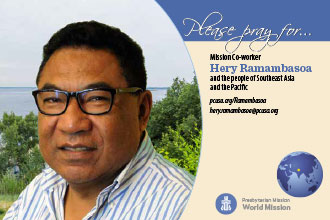 In his role as regional liaison for Southeast Asia and the Pacific, Hery facilitates and seeks to strengthen healthy, missiologically appropriate relationships among entities of…

Give in honor of the ministry of Hery Ramambasoa