Dorothy and Gordon occasionally return to the U.S. and are available to visit congregations. Email them to extend an invitation to your congregation or organization.

About Gordon and Dorothy Gartrell’s ministry

Rev. Gordon and Dorothy Gartrell work in partnership with the United Presbyterian Church of Brazil (IPU) in ministries of leadership development and evangelism. Because there are more churches than pastors in the IPU, the Gartrells are helping to develop lay leadership and are providing resources for local churches. As lay leaders and new members grow in knowledge and skill, they are better equipped to lead innovative and in-depth worship services and to create and implement educational programs. Gordon and Dorothy’s commitment to facilitating church members’ recognition of their own skills and leadership potential is fueled by a strong love for the Brazilian people.

Brazil is South America’s most influential country, an economic giant, and one of the world’s biggest democracies. Brazil also has a large manufacturing sector, a significant portion of which is comprised of automotive and aviation manufacturing. After years of economic boom and bust, changing currencies, hyper-inflation and foreign debt, Brazil´s economy and currency have been stable for more than a decade. However, much of the arable land is controlled by wealthy landowners and international corporations, and a large gap exists between the rich and the poor.

A sermon in 1859 in the chapel of Princeton Seminary inspired the first Presbyterian missionary to come to Brazil. The Presbyterian Church (U.S.A.) partners with the United Presbyterian Church of Brazil (IPU), one of several local Presbyterian denominations, through sending mission personnel who focus on redeveloping small churches. The IPU focuses on church growth, ecumenism and lifting up a prophetic voice against injustice. Presbyterian World Mission also partners with the Graduate Program for Religious Studies of the Methodist University of São Paulo (UMESP), one of the region’s premier graduate theological faculties.

About Gordon and Dorothy Gartrell

When Gordon and Dorothy Gartrell were first appointed to serve as mission co-workers in Brazil in 1990, both already held a deep passion for the country and its people.

Gordon grew up in Brazil, where his parents, Sandy and Bert Gartrell, were missionaries for 31 years. He sensed a call to ministry early in his teen years, and during his seminary studies in the United States he returned to Brazil for short-term service. He lived with a veteran missionary family and served along the Trans Amazon Highway.

“I saw Brazil through adult eyes, and not simply from a child’s perspective,” Gordon said. “God was indeed calling me to Brazil to continue my life’s work of sharing Jesus Christ.”

Dorothy went back to the United States for further education, but knew that she wanted to return to Brazil for long-term mission service. She and Gordon served in Brazil for 18 years in church planting and evangelism until their assignment with their previous partner, the Independent Presbyterian Church of Brazil, ended. They have worked with the United Presbyterian Church of Brazil since 2012.

The Gartrells are excited about their work and about how they have seen the emergence of new leaders. “God has given my wife and me a real compassion and love for the Brazilian people,” Gordon said. “We want to share God’s love with them. We want to strengthen the Brazilian church.”

“When Brazilians devote themselves to Christ,” Dorothy said, “it ignites a deep change in their lives. We have seen Brazilians become leaders and have learned many things in the process of helping them become stronger leaders.” The Gartrells enjoy the challenge of creating new programs with many different themes. They feel it’s been a blessing to meet this challenge.

Gordon holds undergraduate degrees from Montreat Anderson College in Montreat, North Carolina, and from Gordon College in Wenham, Massachusetts. He earned his Master of Divinity degree from the Reformed Theological Seminary in Jackson, Mississippi. Gordon is a PC(USA) teaching elder and a member of the Presbytery of Western Kentucky.

Gordon and Dorothy are the parents of three adult children: John, Elizabeth and Daniel.

Watch a video of Gordon and Dorothy Gartrell 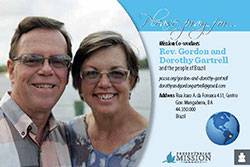 Use this card as you pray for Mission Co-workers the Rev. Gordon and Dorothy Gartrell. The card includes a photo and overview of their work.…

Give to the ministry of Gordon and Dorothy Gartrell