Bill and Ann occasionally return to the U.S. to visit congregations. Email them to learn about their schedule and invite them to visit your ministry.

About Bill and Ann Moore’s ministry

When it comes to sharing the Gospel of Jesus Christ in Japan, Bill and Ann Moore love challenges. In a country where the Christian population is no more than 1 percent and predominantly centered in urban areas, they chose to develop a new congregation in a rural area of western Japan in partnership with the Reformed Church in Japan. They worked together with an established congregation in the denomination, and with the tireless help of an elder and a deacon (Dr. Haruki Kondo and Toshiyo Kondo) to organize the Nishitani Reformed Church. It took a decade to bring to fruition, but now the church has its own pastor and a beautiful building financed by member contributions, other Japanese Christians and supporters in the U.S.

“This community in which there were no Christians now has a growing church with a strong witness to the love of Jesus Christ,” Bill said. “It is exciting to see what God has done through our partners and the generous support of individuals and churches of the Presbyterian Church (U.S.A.).”

Upon completion of the Nishitani Reformed Church project, Bill and Ann were challenged with a very different ministry: assuming leadership of Japan Mission in mission partnership with the Presbyterian Church (U.S.A.). For many years, this Japanese religious corporation with headquarters in Kobe has provided the legal, organizational and logistical bases for the mission work that the PC(USA) does together with partners in Japan. Bill serves as representative director and Ann as administrator of this organization. Since 1859, the PC(USA) and its partners have been at the forefront of evangelism in Japan and instrumental in the founding of many local churches, Christian schools, universities and other institutions. Over the years, these institutions have become self-supporting, but Japan Mission continues to maintain close relations with them.

Established by Japan Mission in a disadvantaged area of Osaka in 1955 with seed money provided by Presbyterian Women in the U.S., Yodogawa Christian Hospital remains under the direction of Japan Mission. Over the years, it has grown to become one of the larger hospitals in the region and a pioneer in providing healing of the whole person in the name of Jesus Christ. In addition, it has the largest chaplaincy program of any hospital in Japan and is a pioneer in the hospice movement and medical innovation.

“Much of our work at Japan Mission is related to our relationship with Yodogawa Christian Hospital,” Ann said. “It is a blessing to encourage the Christian witness and healing that daily takes place there.”

Japan Mission has recently entered into a partnership with the Presbyterian Church of Myanmar. They have committed to partner with Agape Hospital in Kalaymyo, Myanmar, and are considering other projects to engage in together.

Japan boasts the third-largest economy in the world and is a major trading nation known for its high-quality products. Due to its rich cultural heritage and natural beauty, it is increasingly becoming a destination for tourism. Despite long life expectancies, low birth rates and minimal immigration have resulted in a population decrease in recent years.

The majority of Japanese observe Shinto and/or Buddhist traditions, and increasingly, many claim no religion at all. While the Christian faith has had a presence in Japan from ancient times, cultural and political barriers have resulted in slow growth of the Christian community. Nevertheless, the church in Japan is mature. Through its congregations and educational, welfare and medical institutions, it continues to witness to the love of Jesus Christ and make vital contributions to Japanese society.

About Bill and Ann Moore

As the Moores seek to reach the spiritually hungry, they consider themselves “ambassadors for Christ,” a phrase used by the Apostle Paul in 2 Corinthians 5:19–20. “Many Japanese people are spiritually hungry and open to the Christian faith,” Bill explained. “As ambassadors for Christ, it is a blessing to share in word and deed the sacrificial love of God that has reconciled us to God. Doing so satisfies our spiritual hunger and empowers us to live lives of service and witness.”

Ann, Bill and their three grown children feel blessed to have strong ties to Korea, the U.S. and Japan. Bill grew up in Korea, the son and grandson of Presbyterian missionaries. He is a graduate of Davidson College and Union Presbyterian Seminary. Ann, a Korean-American, earned a degree in business administration from Meiji University in Tokyo. Prior to missionary appointment, she worked for a trading company and as an English tutor for a school district in Maryland. Before appointment to mission service in 1985, Bill and Ann served the Little Falls Presbyterian Church in Falling Waters, West Virginia. Ann is a member of Little Falls Presbyterian Church and Bill is a member of Shenandoah Presbytery.

Watch a video of Bill and Ann Moore 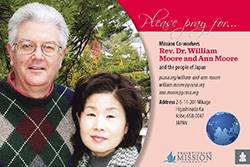 Use this card as you pray for Mission Co-workers the Rev. Dr. Bill and Ann Moore. The card includes a photo of them and an…

Give in honor of the ministry of Bill and Ann Moore