David and Josey occasionally return to the U.S. and are available to visit congregations. Email them to extend an invitation to your congregation or organization.

In his role as regional theological educator and curriculum consultant for the Caribbean, David will accompany Presbyterian Church (U.S.A.) partners in the region as they seek to strengthen theological education. David will consult with several partner theological institutions to assess together their curricula and other factors that strengthen or challenge the preparation of pastors and lay leaders for the church, facilitating connections with Caribbean and PC(USA) seminaries and other potential partners. As time permits, he will also be available for short courses in areas of his expertise. David’s extensive experience as an administrator and professor in the States and his time serving as a mission co-worker at the Evangelical Theological Seminary in Matanzas, Cuba, have endowed him with a deep knowledge of theological education and receptivity to diverse perspectives.

As she embarks on her new role as Christian educator with the Iglesia Evangelica Dominicana, Josey will build on her more than a dozen years serving in Christian education and her four years as a mission co-worker in Cuba. In her ministry in the Dominican Republic, she will work as part of a team in developing and adapting curricula based on the priorities of her Iglesia Evangelica Dominicana partners.

When most North Americans mention the Caribbean, the conversation is about tourist destinations. While the Caribbean has a thriving tourism industry, it also has many people living in poverty who are not seen by the tourists who visit these island nations. Faithful Christian communities throughout the region are bearing witness to Christ’s good news and tackling some of the most pressing social problems.

Located on the Caribbean island of Hispañola, which it shares with Haiti, the Dominican Republic was the site of the first landing of Christopher Columbus in 1492. The territory has been alternately claimed by Spain, England, France and by neighboring Haiti and was twice occupied by the U.S. military. Early in their occupation of the Dominican Republic, the Spaniards subjugated the indigenous Taino people, working them to death in search of gold until no indigenous people were left in the territory within 50 years. As early as 1502, the Spaniards turned to purchasing African slaves. The production of sugar cane, the major export crop for whichever group was in power, relied on grueling manual labor first performed by slaves and later by migrant laborers who were primarily from Haiti.

From 1930 to 1961, Dominicans were ruled by the brutal dictator Rafael Leonidas Trujillo Molina, who ruthlessly curtailed liberties and orchestrated a massacre of 15,000 Haitians in the Dominican Republic in 1937. This massacre of Haitians and the fact that Haiti occupied the country for 22 years continues to lead to tension between the two countries.

In recent years, Dominicans have often been in the streets of the capital protesting government corruption and issues of constitutional reform. Prices of basic goods are rising, increasing the numbers living in poverty.

Violence against women has skyrocketed. Human trafficking, particularly of women and children to the U.S. or other countries, is increasing. These same currents run throughout much of the Caribbean, as do the effects of climate change, with increasingly strong and frequent hurricanes and rising sea levels.

The Presbyterian Church (U.S.A.) has been in mission and ministry in the Dominican Republic since the late 19th century. With the United Methodist Church of the U.S., the PC(USA) helped to establish the Iglesia Evangelical Dominicana (IED), the first Protestant denomination in this predominately Roman Catholic country, and have remained partners since it became an independent church in 1922. The IED ministers within this complex society with grace and dedication and has a strong focus on Christian education, theological education, and community outreach.

About David Cortes and Josey Saez

David and Josey share a strong call to gain a deeper understanding of Christ and to equip others to do the same. “Our earliest memories of our sense of call to ministry are in the area of education,” they say.

For a decade, David taught seminary students in the States, and for nearly a dozen years Josey served as a Christian educator in congregations. However, in 2014, they began to sense a call to international mission service and entered a period of discernment. By the late spring of 2015, they accepted the call to enter mission partnership with the Evangelical Theological Seminary in Matanzas, Cuba. As the first PC(USA) mission co-workers serving in Cuba since the Cuban revolution of 1959, Josey and David embarked on their mission journey to Cuba to teach theological and Christian education. Yet, they found that their Cuban brothers and sisters had as much if not more to teach them.

In the midst of scarcity and hardship, Cuban Christians embodied faith and love. In Cuba, the couple came to know seminary students, ministers and everyday people who willingly sacrificed their own meager comforts to better the existence of others. The faith of Cuban Christians is a living faith, a commitment to becoming more like Christ. Josey and David knew that they were not bringing Christ to Cuba — Christ was already there.

Although they know adjusting to a new context in a new country will present challenges, David and Josey trust that “there is more that unites us than separates us. There is much joy in sharing at Christ’s table.”

“As we embark on the next stage of our Christian education,” they explain, “it is our hope that we will be seen as partners in every aspect rather than as the ones who are imparting knowledge. We start this new position with hearts and minds open to learning from and with our Dominican Republic and Caribbean partners in Christ’s mission.”

Prior to entering mission service, David served for four years as pastor of Iglesia Presbiteriana Hispana Emmanuel in Claremont, California. From 2000 to 2009, he was director of academic services and associate professor of New Testament at San Francisco Theological Seminary’s Southern California campus. He was also director of the Hispanic Ministries Program at McCormick Theological Seminary in Chicago and pastor of Ceiba Baja Presbyterian Church in Aguadilla, Puerto Rico.

Josey received an Associate of Arts degree from the University of Puerto Rico and did additional study at Mt. San Antonio College in Walnut, California, and San Francisco Theological Seminary.

Watch a video of David Cortes and Josey Saez 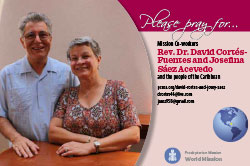 Give to the ministry of David Cortes and Josey Saez