Photo by Kay Chernush for the U.S. State Department

The year 2013 marks the 150th anniversary of the Emancipation Proclamation.  Because of the groundbreaking work of our ancestors, slavery was outlawed in the United States.  However the legacies of chattle slavery continue to haunt our society even as we turn to face a new form of slavery: human trafficking.  More than 20.9 million people are estimated to work in conditions of forced labor world-wide according to the International Labour Organisation.  On January 11, consider marking human trafficking day with prayer and action.

Resources for Worship and Reflection:

We hope that you will share with us how you have used these resources and what you are doing in your congregation or presbytery to draw awareness to human trafficking and how we can work to prevent it.  Drop us a line at HTRoundtable@pcusa.org.

Global Report on Trafficking in Persons 2012

“ … we believe that all children depend upon adults for safety and security in a world that does not always value children;
All children are affected first and most deeply by those things that work against health and wholeness:
where there is war, children are frightened and without a safe place … ”
(A Vision for Children and the Church, adopted by the 203rd General Assembly, 1993)

In times of war or armed conflict, the most vulnerable depend upon adults for safety and security. But in many war-torn parts of the world, children are not only frightened and without a safe place, they are forced to engage in warfare as child soldiers. Child soldiers are considered to be victims of human trafficking when they have been recruited unlawfully through force, fraud, or coercion. Many children are abducted to fight on the front lines. Others are unlawfully made to work as porters, cooks, guards, servants, messengers, or spies. Young girls can be forced to marry or have sex with adult soldiers. Both girls and boys are often sexually abused and are at high risk of contracting sexually transmitted diseases. 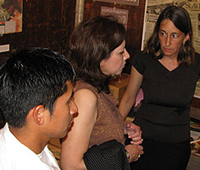 Ten years ago, with the passage in Congress of the Trafficking Victims Protection Act (the law used to bring criminal charges of slavery against employers in the U.S. today), the U.S. State Department began issuing a yearly report on trends in international slavery and efforts to combat it, called the “Trafficking in Persons” (TIP) report.

As part of the annual TIP report release, the State Department recognizes the efforts of a handful of individuals from around the world who have shown extraordinary commitment and leadership in the fight against slavery, TIP “Heroes” as the State Department calls them.

This year, Laura Germino, the CIW’s Anti-Slavery Campaign coordinator, has been chosen to receive this terrific distinction, and when she does, she will be the first U.S.-based recipient to receive the recognition. Further, the State Department has requested that the CIW’s Modern-Day Slavery Museum serve as the backdrop for the 2010 TIP report ceremony.

The prophet Isaiah reminds us that God desires we “let the oppressed go free and break every yoke” (Isaiah 58:6b). We give thanks for Laura and the work of the Coalition of Immokalee Workers, for the thousands of farmworkers they have assisted and for the way in which they have helped the PC(USA) bear witness to God’s intention of well-being for all people.

Ambassador CdeBaca’s keynote address at the Freedom Network USA’s annual human trafficking conference explores what we’ve learned over the last 10 years since the passage of the TVPA in 2000. 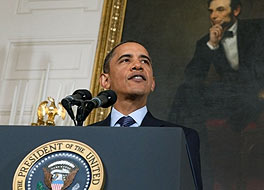 Photo by Chuck Kennedy, from www.whitehouse.gov.

January 2010 – Insisting that fighting modern-day slavery is a shared responsibility President Barack Obama urged all Americans to educate themselves on the signs and consequences of human trafficking, declaring January to be National Human Trafficking Prevention Month.

His stirring pronouncement made on January 4 begins, “The United States was founded on the principle that all people are born with an unalienable right to freedom — an ideal that has driven the engine of American progress throughout our history. As a nation, we have known moments of great darkness and greater light; and dim years of chattel slavery illuminated and brought to an end by President Lincoln’s actions and a painful Civil War. Yet even today, the darkness and inhumanity of enslavement exists. Millions of people worldwide are held in compelled service, as well as thousands within the United States. During National Slavery and Human Trafficking Prevention Month, we acknowledge that forms of slavery still exist in the modern era, and we recommit ourselves to stopping the human traffickers who ply this horrific trade …” Read the full statement 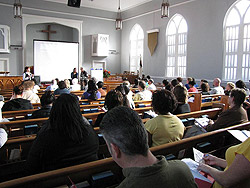 The gentle morning light streamed through the arched windows of Mulberry Presbyterian Church, warming the wooden pews of the sanctuary, where more than 150 FBI agents, Presbyterian clergy, social workers, law enforcement, human services college students and medical professionals gathered for a day-long training on human trafficking in early September. Sponsored by the Presbytery of Charlotte and the PC(USA), the training was led by the Freedom Network Training Institute, whose leaders from the fields of social service, law and community-based organizations have been on the front lines of investigating cases, assisting victims and working with government and law enforcement to prosecute these crimes.