Gathering first at the Church Center for the United Nations on Jan. 16, the Advisory Committee on Social Witness Policy (ACSWP) followed a full day of meetings with another two days at Stony Point Center, reviewing reports that will be going to the General Assembly. It was more interesting than you might expect! 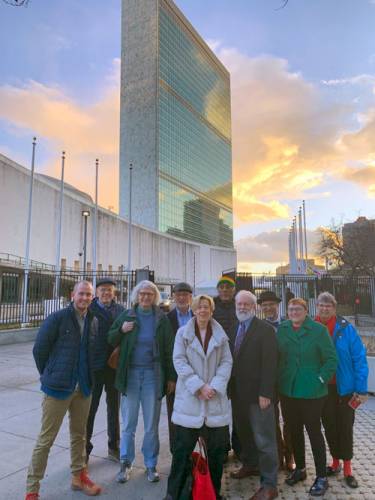 The Presbyterian Ministry at the United Nations hosted the committee and helped it meet with a very impressive team of ecumenical colleagues to test a proposal going to GA. That proposal, “Reimagining the World House,” is for an ecumenical study forum to strengthen Christian voices in the national debate over foreign policy. Along with commitments to human rights, diplomacy and international law, the Presbyterian Church (U.S.A.) has also encouraged more international cooperation on matters such as climate change, migration, religious freedom, and equal treatment for women and children. In a climate where ethno-nationalism and authoritarianism are increasingly powerful and religious and ethnic minorities are being flagrantly mistreated, the U.S. churches themselves need to hear from our international partner churches.

ACSWP heard from representatives of the African Methodist Episcopal Zion Church; the United Methodist Church; the Mennonite Central Committee; the Episcopal Church; and Caritas, the chief international relief arm of the Roman Catholic Church. As hoped, each had a somewhat different angle of vision on how to create consensus — even among the churches — for a more peaceful and just community of nations and on how to get more of the churches’ light out from under the bushel. The results of this discussion are being added to insights from an international gathering in November (see https://www.presbyterianmission.org/story/standing-together-in-a-world-divided/) and comments from Presbyterian ethicists in the Social Ethics Network earlier in January (more on this later in this report).

After a tour of the United Nations’ historic assembly halls, the committee met with James Sutterlin, a Presbyterian member of the Security Council staff, for a briefing on current matters before that body, relief for Syria, tensions between the U.S. and Iran and Iraq, populations under threat of persecution, and positive work on the Sustainable Development Goals (see presbyterianmission.org/resource/study-devotional-guide-for-the-sustainable-development-goals). To say that the senior staff of the U.N. are always under pressure would be an understatement.

The committee then met over dinner with the Rev. Phil Tom, convener of the Urban Ministry Network (UMN), and the Rev. Dr. Robert Foltz-Morrison, executive presbyter of New York City Presbytery. Tom has written a summary of the UMN’s work since 2014. Foltz-Morrison reported on some of the presbytery’s mission to the group. After dinner (and rush hour), the members were transported to their base at Stony Point Center.

Getting down to ACSWP business

As is usual at its meetings, on Friday the committee heard from liaison members from the Advocacy Committees on Women’s Concerns and Racial Equity, its member on Mission Responsibility Through Investment (MRTI), its co-chairs, coordinator and the managing editor of Unbound (justiceunbound.org), an internet journal that serves ACSWP and the broader Compassion, Peace & Justice ministries area. Managing editor Lee Catoe noted the considerable redesign of the Unbound site he did after authorization at the committee’s meeting in Baltimore in October. The committee called for more alerts to go to those who subscribe. 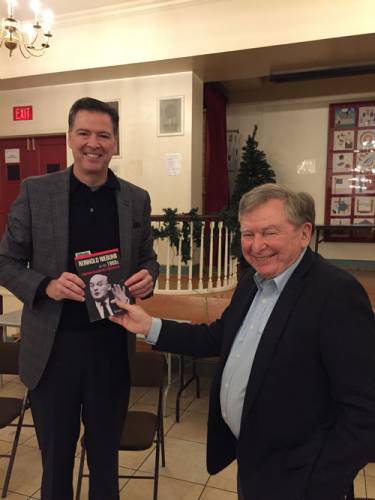 The committee also heard a brief update from the Social Ethics Network, a group of professors who assist ACSWP on study projects and who currently meet before annual meetings of the Society of Christian Ethics. This year, that network had a valuable informal discussion with James Comey, author of “A Higher Loyalty” and a big fan of the late ethicist Reinhold Niebuhr.

What was not usual was the news received from a representative of the Office of the General Assembly, who informed the committee that its request for exceptions to length limits on certain reports was denied, as all such requests would be. Where previous Stated Clerks had recognized that the scope of studies the committee is mandated to follow would sometimes yield reports over 10,000 words (See “Why and How the Church Makes a Social Policy Witness with Study Guide, 1993“), the last General Assembly cut that number to 5,000 to reduce costs of the translation of all GA business into Korean and Spanish. Longer study material may still be posted on pc-biz.org, but as appendices separate from the summaries and recommendations.

The committee discussed how it would adapt previously prepared reports to the new requirements, given that each report reflects both its subject matter and the editorial decisions of the Presbyterian volunteers who comprise the study teams. The members were united in supporting the policy of translation, but glad that the Office of the GA was distinguishing among recommendation and study sections. Some resolutions are short, but others — often written by experts in their subject areas — are meant to stand comparison with products of think tanks and advocacy groups, with shorter summary statements and annexes as needed.

The committee proceeded to discuss the following draft reports: 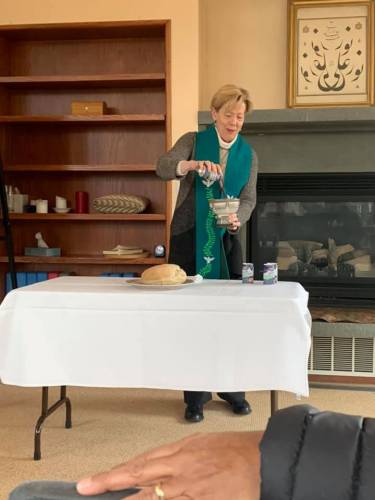 The committee heard a brief report on a study approved by the 2018 General Assembly on the teaching of the humanities in Presbyterian Church-related colleges and universities. Though this plan for a joint study by the Church and the schools involved was seen as a needed way to explore how these institutions were facing pressures to weaken course offerings in this area (which includes English, other languages, religion, philosophy, history and the arts), the task force on this was not appointed due to limitations on the applicant pool, as determined by the GA Nominating Committee.

Rick Ufford-Chase, co-director of the conference center, also spoke with ACSWP. He focused on a proposed “revival” or “road show” of inspiring tent gatherings across the country, intended to present the Church’s message in a new/old way to younger people, possibly involving teams from colleges and universities. He also spoke to the Presbyterian Mission Agency’s affirmation of Stony Point as a laboratory for Matthew 25-inspired ministries, and described the Community of Living Traditions (Islam, Judaism, Christianity) and other programs of the center.

The last substantial topic for discussion was the revisioning of the place of social witness itself in the Church’s life, given considerable changes in national and regional structures since the thorough study of policy-making itself, done in 1993 to incorporate insights from the Brief Statement of Faith. ACSWP’s work is designed theologically on a model of discernment that draws on a range of disciplines to serve the deliberation of the General Assembly and its council, now the Presbyterian Mission Agency. The committee authorized further work on a consultation with ethicists and social ministry practitioners to look at how changes in Church ethos and cultural context might re-frame the social witness, policy and related program tasks. This, in turn, would be reflected in changes in the committee’s Manual of Operations and possible actions for both the PMA and the General Assembly.

For further information on the reports discussed above, please contact acswp@pcusa.org.

ACSWP and the 2018 General Assembly 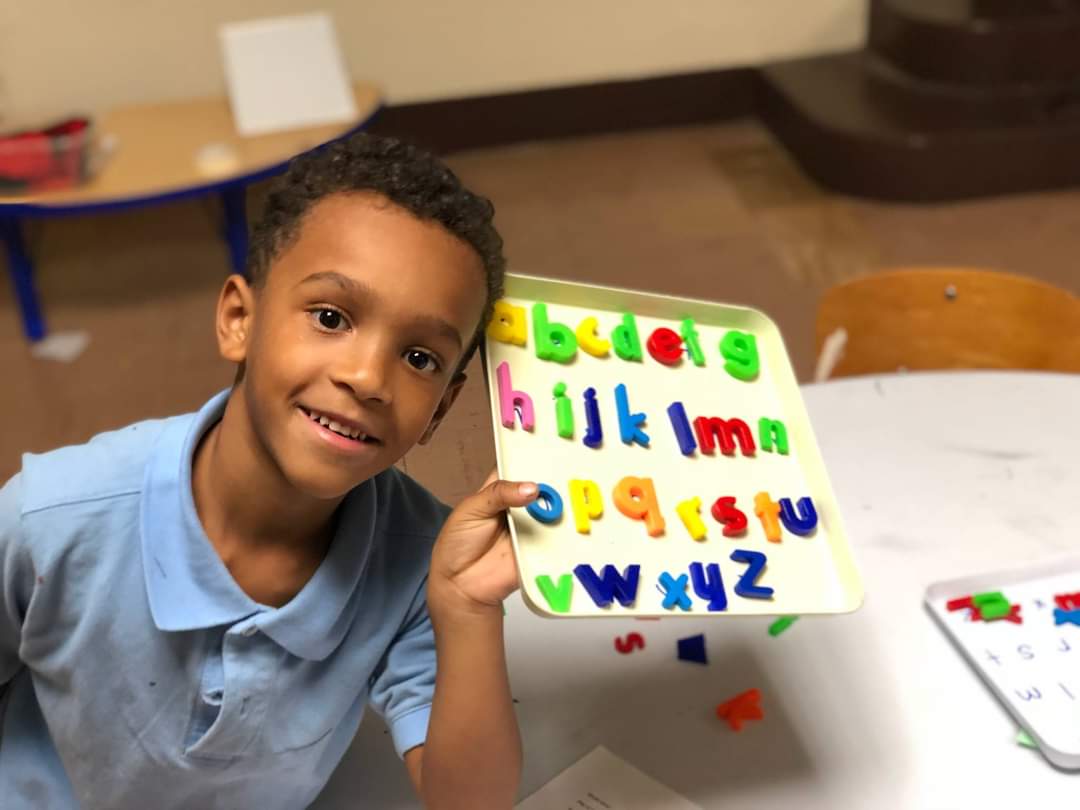 Register today for the next Matthew 25 event!

Join us on Oct. 20 at 2 p.m. EDT for the next online Matthew 25 event to connect with leaders engaged in ministry supporting access to high-quality education for every child. Where are those who have least — those most precious of God — going unseen in the educational system, and how are Presbyterians finding ways to be with them? Register today!
Learn more >